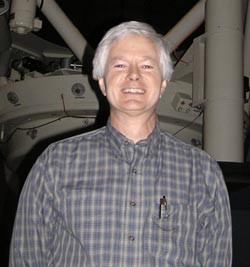 Arne Henden will take over as director of the American Association of Variable Star Observers (AAVSO) effective March 1, 2005.

Today the American Association of Variable Star Observers (AAVSO) announced Arne A. Henden as its new director. He'll step into the position left vacant by the passing of Janet Mattei on March 22, 2004. Henden is no stranger to the AAVSO. He has served as an AAVSO council member for six years and has submitted thousands of observations to its International Database.

Henden worked closely with Mattei for many years. "Janet was a legend — an excellent professional astronomer with a uniquely friendly personality," says Henden. "I only hope that she is watching and will remain the mentor that she was in life."

Henden comes from the the U.S. Naval Observatory Flagstaff Station (NOFS). As a senior research scientist Henden worked on projects ranging from designing large-format near-infrared detectors, to supporting the observatory's astrometric catalog mission, to serving as part of the USNO contingent working on the Sloan Digital Sky Survey.

During his years at NOFS, Henden emerged as one of the premier mentors of amateur astronomers, especially those interested in variable stars and minor-planet astrometry. He is a regular contributor to numerous online discussion groups and communities, and he was influential in the founding of the High Energy Network, which searches for optical afterglows associated with gamma-ray bursts (GRB). Henden is a member of the American Astronomical Society, the Royal Astronomical Society, and the International Astronomical Union, and he participates in numerous consortiums involving cataclysmic variable stars and GRB afterglows.

Henden's actions have demonstrated a long-term dedication to bringing the professional and amateur astronomy communities closer together. As director of the AAVSO, he plans to continue this work. "Many professionals are unaware of the value of amateurs to their projects and many amateurs are uncertain as to how to contribute," says Henden. "The AAVSO can improve the situation by providing training to the amateurs, continuing to be the place for data archival, forming joint pro-am campaigns on targets of opportunity, and facilitating the presentation of results at professional meetings."

With 20-inch and larger telescopes proliferating among amateur astronomers, Henden takes the helm of the AAVSO at a time when amateur astronomers' backyard observatories often resemble small university facilities. "The AAVSO is uniquely positioned to take advantage of this exponential growth in equipment and observers, and the AAVSO will continue to be a leader in mentoring and providing direction," he says.

"With his extensive experience working with amateurs and his professional reputation as one of the world's premier photometrists, Dr. Henden is a perfect fit as the new leader of the AAVSO," said AAVSO president Bill Dillon in a prepared statement.