This image from the Atacama Large Millimeter/submillimeter Array (ALMA) looks like an Independence Day display, but it’s not. These colorful streamers of gas are the remains of a centuries-old explosion, the concussive consequence of four (or perhaps more) stars that came together in a gravitational tussle.

The event took place 1,350 light-years away in the Orion Molecular Cloud, a giant gas cloud just behind the famous Orion Nebula. Massive stars form there in densely packed clusters — so crowded that orbital chaos reign. Stars may pass close enough together to collide and merge, form tight binary systems, or eject each other from the cluster altogether.

Just such an event appears to have happened roughly 540 years ago. At least four stars came together for a gravitational meet-up. Two of them probably collided, or perhaps they just missed, swinging instead into a tight orbit around each other. The gravitational energy released in such a binding would have propelled the other two stars in the system outward.

One of the stars fleeing this centuries-old event was only recently discovered (see “Runaway Star Points to Stellar Nursery Free-for-all”) and dubbed Source X. It’s speeding away from the event at 55 kilometers per second (120,000 mph). Some ways behind it is the slower-moving Source I, the merged or binary star system, seen only by its radio-wave emission. Another star, dubbed the Becklin-Neugebauer object and known about for decades, is running away in the opposite direction from Source X at roughly half its speed.

Altogether, the stars’ velocities point to a common point of origin, a single gravitational event that sent two stars careening toward each other and the other two flying. But here’s the kicker — the stars are newborns, still swaddled in their natal clouds. So their tussle five centuries ago didn’t just send the stars flying, it sent their gas flying too. That gas, cool but speeding outward at more than 150 kilometers per second (340,000 mph), is what ALMA sees.

It’s even possible that, if the two close-passing stars merged, some of the gas streamers actually come from the stars themselves — their outer layers may have been ejected in the explosive event. “But the details of exactly how the outflow was launched are uncertain,” notes Kevin Luhman (Penn State), who discovered Source X but is not involved in the ALMA observations.

For more information on this submillimeter-wavelength fireworks display, see the NRAO or ESO press releases.

The event took place 1,350 light-years away in the Orion Molecular Cloud
... ...
Just such an event appears to have happened roughly 540 years ago.

So, did aliens drop by in their FTL ship and hand us the snapshot??????

Too Many Massive Stars in Universe's Youngest Galaxies 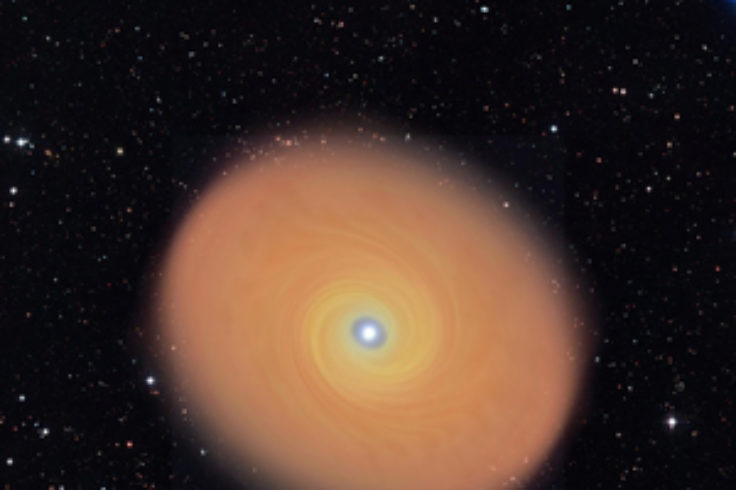 The Origin of Massive Stars