Sierra Remote Observatories, not far from Fresno in central California, offers abundant clear skies, excellent seeing, and high-end facilities that have attracted elite astrophotographers from around the U.S.

Growing up amid the fertile farms of California's vast Central Valley, I was the rare kid who loved stargazing. Fresno, the nearest city, had two small colleges, a jet-rated airport, and a population of 150,000. The biggest telescope within a 100 miles of me was the awesome 12-inch reflector at Kingsburg High School. 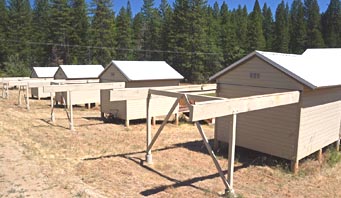 So imagine my surprise when, a few decades later, I learned that three guys had set up a state-of-the-art, remote-observing complex in Auberry, a little hamlet nestled up in the Sierra Nevada foothills just 30 miles from downtown Fresno.

I know Auberry — heck, a cousin of mine lives there. So how, I wondered in disbelief, could those rugged, tree-covered slopes possibly offer good views of the sky? And what about the pall of light pollution from Fresno's urban sprawl, whose population now tops 500,000?

I had to check this out — and in mid-June, back in the area briefly for a family wedding, I got the chance.

The Sierras are serious mountains. Winter's heavy snowpack leaves much of its high country inaccessible for months at a time. Mount Whitney's 14,494-foot summit is taller than Mauna Kea's. But Auberry's modest 4,800-foot elevation is less than an hour's drive from the Fresno airport. 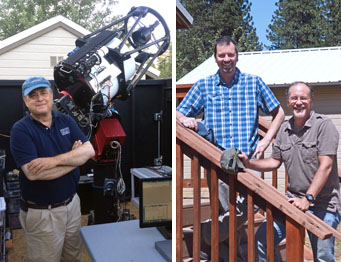 No signs announced my arrival at Sierra Remote Observatories — you need to pick the correct unmarked dirt driveway to find it. I was greeted by Mel Helm and Larry Van Vleet, who together with Keith Quattrocchi own the place. It sits atop a local plateau known as Bald Mountain, and apart from low trees the vistas are great all around. Eight roll-off-roof "cabins" are arranged in two neat rows of four, and nearby is a much larger building with room for 14 instruments.

Helm, Quattrocchi, and Greg Morgan (who later sold his interest to Van Vleet) didn't envision becoming big-time telescope czars when they stumbled upon the site in 2007. They were simply looking for a place — even the backyard of a willing local homeowner — to do astrophotography. "We just started hiking in the hills," recalls Quattrocchi, who'd recently moved to the area from Maine. Then they stumbled upon a 5-acre apple orchard that seemed ideal: it had already been cleared of tall pine trees, it had electricity and Internet access, and it was for sale.

Sierra Remote Observatories boasts some of of the finest skies for observing in North America. Summer days are typically best, as demonstrated by this snapshot of weather conditions from early July.

Telescope farms aren't new — Mike and Lynn Rice started New Mexico Skies some 15 years ago — and a list of robotic facilities that includes SLOOH, iTelescope, and others gets longer all the time.

But a little research and some test observations showed that the Auberry site offered a rare combination of 237 clear nights per year, gentle prevailing winds, few thunderstorms, and excellent atmospheric stability.

In fact, the seeing borders on incredible, averaging 1.0 arcsecond throughout the summer — when clouds are virtually nonexistent and the Milky Way's abundant deep-sky targets beckon. During winter's cold, the seeing creeps upward slightly to 1.2 arcseconds, still very good. And snowfall usually doesn't stop observing for long. "Mel has actually hauled scopes in here on a toboggan," quips Van Vleet.

Surprisingly, the trio found that light pollution from the Fresno area is limited to a modest light dome toward southwest, largely blocked by trees, and overhead they could eyeball stars down to magnitude 6.5.

So they snatched up the property and laid plans for their dream observatories. However, getting the necessary permits from local authorities proved a nightmare because, Helm admits, "They didn't know what to do with us."

The latest addition to Sierra Remote Observatories is this building with a raised floor, giant roll-off roof, and enough room for 14 large telescopes.

Eventually everything fell into place, allowing them to install eight observing huts (scaled up from the original three). Earlier this year, after 10 months of construction, the big shed came online, and a planned second one will bring the site's capacity to about three dozen scopes — all controlled remotely via high-speed Internet.

One SRO client is astro-imager Jay GaBany, who came on board three years ago. He lives in the San Francisco area, and the notion of being able to reach his setup by car in just a few hours appealed to him. He'd also heard that SRO was run by friendly guys who were themselves imaging enthusiasts. But the site's "almost professional-level" seeing is what sealed the deal for him. "The stars look like someone nailed them to the sky," GaBany comments, which keeps everything tack-sharp during long exposures of elusive targets. 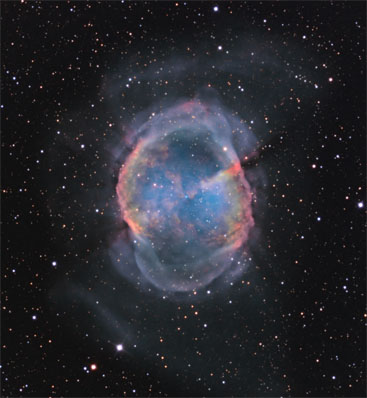 Martin Pugh used the 17-inch PlaneWave telescope he's installed at Sierra Remote Observatories to capture subtle details and colors in the Dumbbell Nebula (Messier 27). Click on the image for a larger version.

All that wonderfulness comes at a rather steep cost. Van Vleet told me that the monthly rental for one of the standalone sheds is $2,000, and it's $1,500 for a pier in the big building. But plenty of users have signed leases to set up shop, including a 16-inch telescope operated by Fresno State's Fred Ringwald and a 24-inch that's going in as an instrument testbed for the SOFIA airborne observatory.

A local handyman handles routine maintenance, but Helm and Quattrocchi drive up often to install upgrades and keep the things running smoothly. (Van Vleet lives in the Denver area and visits occasionally.)

But they haven't forgotten what drew them to Auberry in the first place. On any given clear night, all three of them are happily clicking away from their homes. "We're obsessed — that's all there is to it!" admits Quattrocchi, who's a neurosurgeon by day.

And, of course, when autumn comes, they can pick all the apples they want.

Novice Learning Time, Kelly you mentioned in the article thar Seeing was 1 Arcsecond. I am completely perplexes by this phrase. Can you or anyone else explain this to me and elaborate if you can. And if possible dumb it down for me and be gentle.
I'm sorry if this is the wrong spot for this post but I had to ask
.Thanks All and Clear Skies Mike

Seeing has to do with the steadiness of our Earth's atmosphere. It's all about resolution. Years ago, telescopes were usually sold stating their resolving power, given in arcseconds - the larger the aperture (diameter of primary mirror or objective lens), the "better" the resolving power, and the smaller the number. As you probably know, the sky is measured in hours, minutes and seconds of Right Ascension and degrees, minutes and seconds of Declination. If, for example, you wanted to "split" a double star whose components are separated by 1.1 seconds of arc, a telescope with resolving power of 1.9 seconds will not do it Each star will appear to touch or be part of the other. A telescope with better than 1.1 arcsecond resolution will split the double star cleanly into two individual stars with a bit of dark sky between them. provided that the seeing is 1.1 arcesconds or better. On a night of poor seeing, you may only be able to drive a Volkswagon between the components, while on a good night with the same telescope, you could easily drive two semi tractor-trailers side by side between them. By the way, that's why the Hubble telescope was put into orbit, rather than on a mountaintop - no atmosphere and therefore no issue with seeing!! The only limit to the scope'e resolution is the optics and the size of its Airy disc. I'll let you look that one up!!

I hope this helps, and hopefully others will give you their take - I am sure a different illustration or turn of phrase can make things clearer.

Good seeing in the aierras? Not in my experience.

I like the look of the small observatories. Is there a description of their construction? Does anyone know the email address of the builders?
Thanks,
[email protected]