Most alien planets are nothing like what we've got in the solar system. Scientists are homing in on these mysterious worlds to see what they’re made of.

Of the Kepler spacecraft’s impressive haul (3,538 exoplanet candidates as of November 2013), roughly three-quarters of them scale between Earth and Neptune, which is four times the size of Earth.

In other words, most transiting planets are nothing like the worlds in our own solar system.

Relative sizes of habitable-zone planets discovered by the Kepler spacecraft, shown alongside Earth.

With no local representatives, it’s not clear how many of these planets are super-Earths (that is, rocky) or gaseous mini-Neptunes. The only way to find out is to measure their mass, and that’s hard for Kepler to do. The spacecraft spent four years detecting planets as they passed in front of their host stars, measuring the dips in starlight as they did so, but astronomers can measure only the planet’s size from the shape of the blip, not its mass.

So the Kepler team took to the ground, using the Keck Observatory in Hawaii to follow up space-observed transits with good, old-fashioned radial-velocity measurements — the planet-finding technique of choice before Kepler came around. The team looked for each host star’s telltale wobble as the star and its attendant planet orbit a common center of mass. 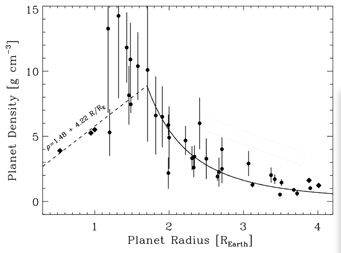 This plot shows the planet densities and radius measurements for 33 exoplanets, most coming from the Kepler team and some from other published results. Small planets get denser as they grow in size, a pattern expected for rocky planets. But at roughly twice Earth's diameter, the trend changes and planets become fluffier as they get bigger, probably because they are gaining mass in the form of thick atmospheres of mostly hydrogen and helium. Lithwick and Hadden's results show a similar trend.

At the January 2014 meeting of the American Astronomical Society, Geoff Marcy (University of California, Berkeley) announced the results of four years’ worth of these ground-based observations, which followed up on 22 stars with 42 exoplanets. The team measured masses for 16 planets, and rough guesses (in technical terms, 1-2σ measurements) or upper limits for the rest.

Another team led by Yoram Lithwick (Northwestern University) took a different approach. Rather than measuring the star’s wobble, Lithwick and graduate student Sam Hadden measured the planet’s wobble. If two or more planets orbit the same star, the planets will gravitationally tug each other, tweaking the timing of each transit. Using this method, Lithwick and Hadden measured the masses of another 58 super-Earths. Most of these are relatively firm estimates, with only about 10 "rough guesses."

This sequence shows how exoplanets that grow to be a few times the size of Earth appear to add massive gas envelopes, not rocky material, to achieve their final size.

Measuring the masses was hard work, but well worth it because now we know the densities of all those planets and can start to talk about what they're made of. Both Marcy and Lithwick found the same thing: up to somewhere between 1.5 to 2 Earth radii, the bigger the planet, the denser it becomes. That’s about what you would expect for rocky planets.

But theory says that at a certain point, gravitational compression wins out — add more mass and it just compresses further — so rocky planets should never get any bigger than about twice Earth’s size. And that’s exactly what Marcy and Lithwick find: planets bigger than about twice the size of Earth actually get fluffier as they grow. These bigger-but-less-dense planets are probably adding an extended atmosphere of mostly hydrogen and helium around a rocky core.

So is there a simple dividing line between the super-Earths and the mini-Neptunes? That would be convenient for targeting exoplanet searches. And observations so far bear out the theory that no rocky planet can be bigger than two Earths. 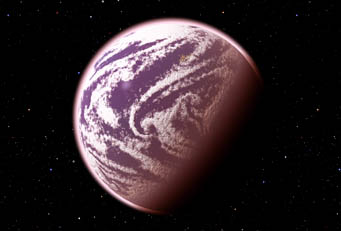 The exoplanet KOI-314c, depicted here, has the same mass as Earth yet is 60% larger in diameter, meaning that it must have a very thick, gaseous atmosphere.

But apparently it doesn’t work the other way around: in the same set of presentations, David Kipping (Harvard-Smithsonian Center for Astrophysics) announced the discovery of KOI-314C, the first Earth-mass planet that is surprisingly nothing like Earth. Its radius is 60% larger than Earth’s, so in classic mini-Neptune style, it too probably has a rocky core surrounded by gas.

“If you told an astronomer yesterday that they’d found an Earth-mass planet, they’d think it would surely be rocky,” Kipping says. “[This planet] suggests we can’t just draw a line in the sand.”

This was a great article, and it matches what I've read elsewhere (the point about the increased size coming from a hydrogen-helium atmosphere getting larger).

Brett: Generally, bodies in the solar system are either entirely rocky (Mercury, Mars), or entirely watery (Europa, Enceladus). “Prevailing conditions” over astronomical time scales tend to push a body into one category or the other. The drawing suggests this generality. On Earth, life-on-land is extremely dependent on the oceans, which provide rain, and life-in-the-oceans is extremely dependent on the land, which provides nutrients. Earth, with its unlikely mix of both water and rock, is truly “super” in that regard.

As we learn more about exoplanets, the rosy assumptions of exobiology and the search for extraterrestrial intelligence seem more and more questionable. Maybe there are life forms, intelligent life, and even spacefaring civilizations on other planets, but so far we have no conclusive evidence for any of that. At this point it's also possible that our Earth is a very rare Goldilocks planet with all the right elements of enough water, enough dry land, plate tectonics, and a really big moon, at the right distance from a star that is remarkably steady in its light output, with a huge gas giant planet in an outer orbit that absorbs a lot of wandering space rocks, etc. In any event, the Earth is the only planet where we know life exists, and the only planet where our species and all our fellow species will either live or go extinct. Let's take good care of her.

That’s an excellent question Anthony. Exobiology has been quick to make broad predictions based upon an example of one; life on this planet. And the Earth does seem uniquely configured for hospitality to life. But indeed the universal laws of physics also seem to be precisely configured in a manner conducive for the existence of planets at least somewhat like Earth. Kepler and other studies are showing that planets are common, but also that planetary systems vary greatly, and I’m sure we’re just to beginning to get a picture of the endless variety of planetary conditions that exist. Those who look at life on this Earth from an evolutionary assumption see the wide variety of earthly habitats, almost all of which are chock full of living things and reason, since life is so widespread here, it should be elseware as well. I suspect that this inference might even be right, but for a different reason. If the Earth was as I and many others believe tailor made for life, couldn’t the Great Tailor have also produced life abundantly throughout the universe? The diversity of living things here on Earth suggests to those who believe in a Creator that this One has a great fondness for life. So even though I think life is too complex to spontaneously self-generate, I still suspect that Exobiology could be an endlessly expanding, extremely rich field of study. (See Ecclesiastes 3:11) I’m extrapolating from an example of one too, but if this planet is the only one with living things it would seem like an enormous waste of space.

I would not expect to find too many here who believe in Great Tailors. This is a scientific forum, after all! Looking from an evolutionary viewpoint it is significant it took almost all of the earth’s 4.6 billion years to produce life intelligent enough to communicate across interstellar space. Intelligence is not a guaranteed product of evolution; it only arises where it is necessary for survival. Had climate change not caused deforestation at just the right time we could still be swinging around in the trees, oblivious of the universe beyond our forest. This is one last factor to add to those mentioned by Anthony Barreiro that might mean Earth is a very rare place indeed.

I would not expect to find too many here who believe in Great Tailors. This is a scientific forum, after all! Looking from an evolutionary viewpoint it is significant it took almost all of the earth’s 4.6 billion years to produce life intelligent enough to communicate across interstellar space. Intelligence is not a guaranteed product of evolution; it only arises where it is necessary for survival. Had climate change not caused deforestation at just the right time we could still be swinging around in the trees, oblivious of the universe beyond our forest. This is one last factor to add to those mentioned by Anthony Barreiro that might mean Earth is a very rare place indeed.

Andrew, I wouldn't be too disparaging of the intelligence of our primate cousins. Chimpanzees have been observed watching sunsets and presumably enjoying the aesthetic experience. I imagine they might also enjoy lying back in their leafy nests watching the milky way roll through the night sky.