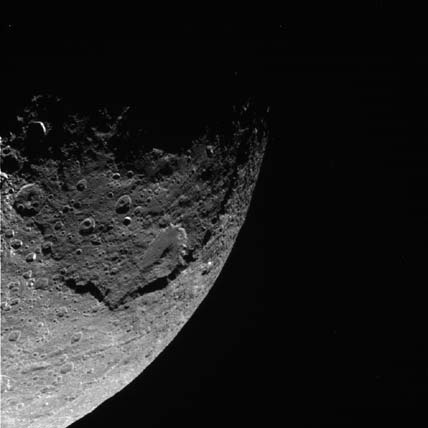 Gian Domenico Cassini would be proud. On December 31st, the spacecraft bearing his name made its first of two close encounters with Iapetus, the third-largest moon orbiting Saturn and the first of the four moons that Cassini discovered himself. Iapetus is a world of opposites — one half is as reflective as snow, the other half reflects light like schoolyard blacktop. Cassini, the craft, was about 123,000 kilometers (76,000 miles) away from Iapetus when it snapped this high-resolution image of the pockmarked moon. Here we see a view of the dark terrain located on Iapetus's leading hemisphere featuring a large impact basin.

This was the first of two Iapetus flybys and the closest view humans have ever had. The second Cassini encounter with Iapetus is scheduled for September 2007.