Does liquid water flow on Mars? NASA scientists have built a strong case that it does.

In a press briefing held today, a team of planetary scientists announced that the Mars Reconnaissance Orbiter had observed hundreds of dark, fingerlike streaks running down crater walls that seem to appear and disappear with the Martian seasons. The flows look suspiciously like they're produced by liquid water flowing downslope.

An animation combining orbital imagery with 3-D modeling shows flows that appear in spring and summer on a slope inside Mars' Newton crater. Sequences of observations recording the seasonal changes at this site and a few others with similar flows might be evidence of salty liquid water active on Mars today. The flow features are narrow (one-half to five yards or meters wide), relatively dark markings on steep (25 to 40 degree) slopes at several southern hemisphere locations. Repeat imaging by HiRISE shows the features appear and incrementally grow during warm seasons and fade in cold seasons.

Led by Alfred McEwen (University of Arizona), a team of 10 researchers report in today's Science that MRO's High Resolution Imaging Science Experiment (HiRISE) spotted the flows in a range of temperate latitudes from 32°S to 48°S, usually equator-facing slopes that can reach summertime peaks from -10° to 80°F (-25° to +25°C). They range in size from 0.5 to 5 yards in width and can be hundreds of yards long.

"The observations are definitely intriguing in that they provide the most persuasive evidence yet of the presence of seasonally-active liquid water in the near-subsurface," says Stephen Clifford (Lunar and Planetary Institute), an expert on Martian hydrology.

NASA scientists conjecture that the flows on the crater walls, which tilt up at an angle of 35°, might stem from the periodic melting of briny water located just beneath Mars's surface. Saltwater has a lower freezing point than pure water does and thus would be able to remain liquid at frigid temperatures.

The mid-latitudes where the flows are seen represent a kind of sweet spot, planetary scientists believe. Spacecraft measurements suggest that water ice lies buried just below the surface, yet temperatures are warm enough to melt salt-infused water ice. The scientists do not yet know, though, whether the brine outflows emerge from a central briny pool or from isolated saltwater pockets hidden beneath Mars's ruddy crust. 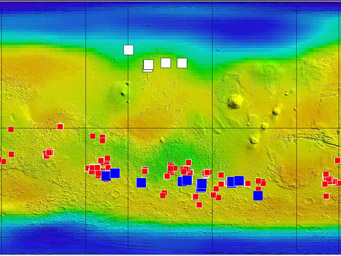 This map of Mars shows relative locations of three types of findings related to salt or frozen water, plus a new type of finding that may be related to both salt and water. Coloring of the map is coded to concentrations of shallow subsurface water ice found by the Gamma Ray Spectrometer - Neutron Spectrometer on NASA's Mars Odyssey orbiter.

These flows differ from the gullies found on the walls of other Martian craters. While the gullies run down the colder crater walls that face the poles, the newly found flows face the Sun.

The possible existence of liquid saltwater reservoirs encourages speculation that life on Mars might be able to eke out a meager existence. "The presence of brine might allow for the expression of an active biological process," said Lisa Pratt (Indiana University), a biogeochemist and director of one of NASA's astrobiology teams. None of the data gathered by the Mars Reconnaissance Orbiter, though, suggests the presence of life.

The HiRISE images don't prove that the flows represent leaking subterranean plumbing. In fact, a spectrometer aboard MRO has been unable to confirm that the flows contain water. Further scrutiny from martian orbit is planned, says McEwen, HiRISE's principal investigator, and tests will be carried out in labs here on Earth to try to mimic what was seen by MRO. If those simulations succeed, they'll strengthen the hypothesis that saltwater flows on Mars today.

For more information about this finding, go here.

Mars is not nearly as cold as you might guess from the low thermometer readings reported by NASA. This is because heat balance depends on more than temperature. We know this, for example, from the wind chill index and the cold shock of jumping into a room temperature lake.

The atmosphere of Mars hardly differs from a vacuum, for most practical purposes. Convective cooling on Mars is therefore much less effective at removing heat from a warm surface. Solar heating of inclined surfaces on Mars is almost as great as it is on Earth despite the greater distance from the Sun because the Martian atmosphere is so dry, clear and thin, except during dust storms. With the low convective heat transfer, sun-warmed surfaces reach higher than expected temperatures before heat balance is reached.

Mars has 2 poles with frozen water; but the other parts of Mars have no ice, except the tops of the high mountains. This is like the situation on our Earth.

There is wind on Mars causing the devils in the desert, and the wind carries the cloud and moves it in the sky of Mars: this is also just like our Earth.

So now they discovered ((flowing water)), and we say there is life on Mars and there are people there on Mars: may be more numerous than the people on Earth.

Every time I see news of "possible water on mars", I wonder if the scientists studying these pictures have ever seen dry ice in water. CO2 is heavy, and I'm no scientist, but I think the colder, the denser the gas gets. There is a lot of frozen CO2 on mars, and when it sublimates it is going to flow just like a liquid in the lowest gullys. From what I can tell, mars is covered with a red talcum powder fine dust covering darker soil underneath. Dust devil tracks show this. Flowing gas could move dust this fine.I can't imagine a water solution that would flow in a near vacuum, at the temperatures on most of mars. The water would have the consistancy of syrup. I think the scientists want to find liquid water on Mars so bad they suspend good sense

The canals are leaking. 😉

I have to agree with Jerry Nutt. This search for liquid water on Mars tends to become an obsession and in the process, the scientific way of thinking is put aside. The presence of liquid water is not the only explanation for the observed phenomenon and also not the most probable one given the environmental conditions on Mars. The presence of those flow features might indicate the presence of some kind of liquid but there is no real evidence of any kind of water not to say life (this is a completely exaggerated speculation). Phenomenon observed on Mars should be handled with care, wishful conclusion and hasty analogies should be avoided while keeping in mind that the Red Planet has a history of making the scientists (and not only them) look ridiculous.

The definition of sublimation is when a solid turns to a gas WITHOUT becoming a liquid. That would preclude sublimation as a gulley forming process, since there is no liquid involved. They have only said that water is a possible reason, no one has stated water is the only reason, only a possibility. And so what if we get excited. There is obviously a liquid of some kind making these gulleys.