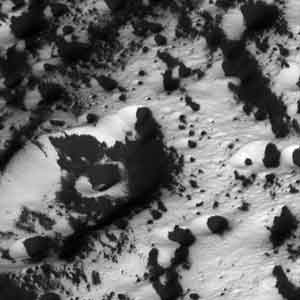 Saturn's moon Iapetus has a dark-colored hemisphere and a light-colored hemisphere. Where the two meet produces a scene like a dish of cookies-and-cream ice cream. The Cassini spacecraft snapped this view on September 10, 2007, from a distance of 3,270 miles (5,260 km).

As David Tytell warned everyone at the beginning of the week, the Cassini spacecraft was set to send back some amazing photos of the oddball Saturnian satellite Iapetus. NASA and the imaging team at the Space Science Institute indeed released a handful of images on Wednesday.

I suspect that none of the hundreds of images still being pored over reveal the famed monolith from the novelization of 2001: A Space Odyssey by Arthur C. Clarke (the movie was originally supposed to take place there, but the setting was switched to Jupiter). Nevertheless you can imagine all sorts of things with views that depict a landscape that juxtaposes regions that are jet black and brilliant white.

Cassini swooped to within about 1,000 miles (1,600 km) of the irregular surface. Bizarre Iapetus not only has a two-toned surface, but its equator is girdled by a ridge of mountains 12 miles high. The pictures and other data hopefully will help researchers figure out the hows and whys of each of these curious characteristics.