One of the greatest surprises in the history of astronomy was the discovery that all the things we see in space amount to less than 1% of the universe’s total matter and energy.

Add the hard-to-detect thin gas between galaxies, and all other forms of ordinary matter, and the total still comes to only about 4.5% of everything that exists. A much larger 26% or so is "non-baryonic dark matter," consisting of some kind of exotic, invisible particles that don't form atoms. The dark matter's gravity dominates the universe, shaped its history, and provides the gravitational pools in which normal matter could accumulate to make galaxies, like scum patches on invisible ponds.

The remaining 70% or so is the so-called "dark energy" that's causing the expansion of the universe to speed up. The nature of this is an even bigger unknown.

But more bits of evidence keep being uncovered. At a press conference last Wednesday at the American Astronomical Society meeting, four teams announced new results that improve our understanding of these phenomena.

The Milky Way's lopsided halo. Astronomers have long known that large galaxies, such as our Milky Way, are centered in larger pools of dark matter known as halos. A group led by David Law of UCLA determined that the Milky Way's dark-matter halo is not spherical but has a squashed shape. Surprisingly, it is flattened along an axis that's tipped 90° sideways to the visible disk of stars defining the familiar Milky Way band in the night sky.

The team reached this conclusion by analyzing the motions of thousands of stars in the "Sagittarius stream," shown below. The stream is the remnant of a dwarf galaxy that was tidally ripped apart by the Milky Way’s gravity during a close pass, leaving a long filament that now wraps twice around our galaxy well outside it. The motions of stars in different parts of the stream reveal the gravitational fields working on them in different parts of the halo. 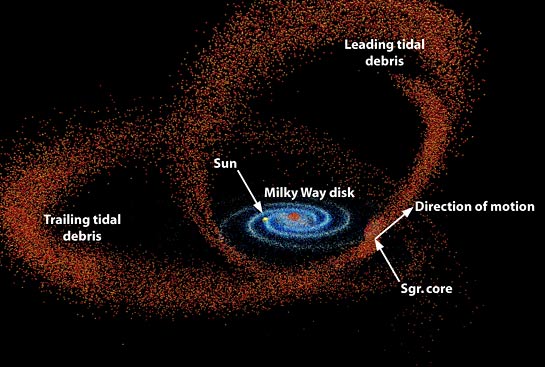 A model of the Sagittarius Star Stream, torn by the Milky Way's tides from a dwarf galaxy during an earlier pass-by. The stream loops twice around the Milky Way — some of it trailing the dwarf galaxy, some preceding it. The motions of its stars betray the presence of dark matter.

The halo actually turns out to be triaxial in shape, meaning that it has a different diameter in each of three directions. “If the halo is likened to a cosmic beach ball, it has been squashed on one side,” said Law; see his representation below. 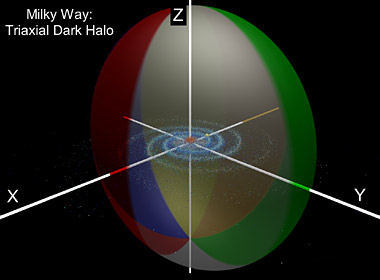 A 'beachball' representation of the triaxial dark-matter halo centered on the Milky Way (the colors of the beachball are chosen arbitrarily).

Law added that astronomers expected the halo to be squashed along the same axis as the Milky Way's disk, since the normal and dark matter both presumably arrived by way of the same source: filaments of dark matter defining gravitational channels leading in.

The halo's size and shape have been influenced by the Milky Way's recent cannibalizations of other dwarf galaxies, so future detailed studies of the halo should give more information about the Milky Way’s evolution as it gathered in its small neighbors.

Local dark energy. More than 10 years ago astronomers discovered that the expansion of the universe is accelerating, the opposite of what they had expected. A key to this revelation was the ability to measure the distances of far galaxies by the apparent brightnesses of Type-Ia supernovae within them, independently of a galaxy's redshift. This distance can then be matched with the redshift — which tells how much the universe expanded while the light was in transit. In this way, astronomers were able to see how the expansion rate has changed over long stretches of cosmic time.

Since then, astronomers have found a wealth of other evidence that some force is causing the expansion to speed up — and how much of it there is, and the crucial fact that it seems to be neither weakening nor strengthening as space enlarges. It was named "dark energy" for lack of anything better.

Now an international team has teased out the effects of dark energy in our own Local Group of galaxies. The Local Group includes the Milky Way, the Andromeda Galaxy, M33, and about 50 dwarf galaxies identified so far.

The team analyzed recent Hubble Space Telescope observations of Local Group galaxy motions (radial velocities), made by a team led by Russian astronomer Igor Karachentsev. By studying how galaxies move with respect to the gravitational center of the Local Group, they could find the boundary where the Local Group’s gravity gives way to dark energy’s “antigravity” effect on larger scales. Dwarf galaxies beyond this boundary are moving outward and will be lost.

“We found a dark-energy outflow repulsion consistent with that found from studying galaxies that are billions of light-years away,” said team member Gene Byrd of the University of Alabama. He added that in the past, scientists usually discover an important effect locally and then apply it to more distant objects. “In this case, we’re going from a global effect to a local effect.”

The smaller the galaxy, the more dark matter. A third group, led by Stacy McGaugh of the University of Maryland, surveyed objects ranging from dwarf galaxies on the small end to the largest clusters of galaxies on the large end, to see whether their ratios of normal matter to dark matter vary with size. From smallest to largest, the objects differed in mass by a factor of a hundred million.

There was indeed a striking trend. McGaugh and his colleagues found that the larger the galaxy or cluster, the greater its proportion of normal, baryonic matter. In the cosmos as a whole and in the largest clusters, dark matter outweighs baryonic matter by about 5 to 1. But the ratio goes up in smaller structures, to the point that dwarf galaxies possess very little baryonic matter relative to dark matter. “For each and every [smaller] object in the universe, some of the normal matter is unaccounted for, and it's a large fraction of normal matter in smaller objects,” said McGaugh. “We don’t know where it is, and it’s a big problem.”

One theory is that the smaller the galaxy, the less able it is to hold onto gas blown by early supernovae; in galaxies without much gravity, the gas flies away to join the thin intergalactic medium. The dark matter, which doesn't interact with normal matter and doesn't feel supernova blast waves, is left behind.

Galaxy growth. A fourth group, led by Niv Drory of the Max Planck Institute for Extraterrestrial Physics in Germany, analyzed data on 300,000 galaxies from the Cosmic Evolution Survey (COSMOS) to determine how galaxies have evolved over the past 8 billion years. The team’s goal is to determine how many galaxies of different masses existed at different epochs in cosmic history. As Drory stated, “We want to understand how our local zoo of galaxies came to be.”

Galaxies began small and numerous, and these mini-structures merged over time to create big ones like the Milky Way. But apparently the process wasn't simple. The group found that the spread of galaxy masses is not as smooth as was thought: dwarf galaxies increase rapidly in numbers with lower mass. And large galaxies show a particular bump in the graph of their mass distribution. These results provide clues about how the mergers of dark-matter halos have unfolded over time, and how feedback mechanisms, such as supernova winds driving gas out of small galaxies, have shaped cosmic evolution. “With this survey, we can trace this evolution back to half the present age of the universe,” says Drory.

There is a viable explanation for dark energy being offered: Duality. See http://www.dark-energy.org/

There is a viable explanation for dark energy being offered: Duality. See http://www.dark-energy.org/

I have been reading various articles about the results of Dr. Law's team at UCLA and every time I see the artists conception of the halo with the 90 degree axial tilt I can't help thinking that this looks like a gyroscope. I wonder if this is a window into the evolution of the relativistic gravity well over time to create this seemly balanced shape. I hope the UCLA team can run some simulations to see what effect this halo position has on galactic precession, a particular interest of mine.