It's an exciting time in high-energy astrophysics. A few weeks ago NASA's Chandra X-ray Observatory celebrated its 10th anniversary in space, and this cosmic discovery machine shows no signs of slowing down. 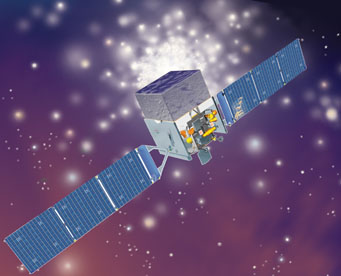 Then there's the Fermi Gamma-ray Space Telescope, which reached orbit in June 2008. (It used to be called the Gamma-ray Large Area Space Telescope, or GLAST, but NASA changed the name a year ago to honor the great Italian-American physicist Enrico Fermi (1901-54), who was the first to suggest a viable way for accelerating cosmic particles to near-light speeds.

Fermi isn't the first space observatory to probe the gamma-ray universe. Explorer 11 (1961) and Orbiting Solar Observatory 3 (1967) had that distinction. But the real breakthrough came from NASA's Compton Gamma-Ray Observatory, which created a map of the gamma-ray sky with dozens of objects in the plane of our Milky Way. With Fermi, however, astronomers finally have a tool with enough resolution (in both location and time) to pin down the nature of these sources.

If you follow the astronomy news we post here, you're already familiar with Fermi's amazing results to date. Last October, S&T editor-in-chief Robert Naeye reported the craft's discovery of a new type of pulsar (a rapidly spinning neutron star) at the center of the supernova remnant called CTA 1. And three months ago, S&T intern Johannes Hirn explained how the Fermi observatory has weighed in on the origin of mysterious high-energy electrons emanating from our little niche of interstellar space. 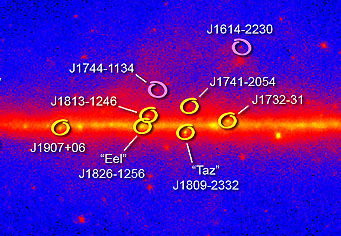 This portion of an all-sky map shows the positions of pulsars (yellow) and millisecond pulsars (magenta) near the Milky Way's central plane studied in 2008-09 using Fermi's Large-Area Telescope. Click here to see the entire map at larger scale.

Since the discovery of CTA 1, Fermi has found at least 15 more gamma-ray pulsars, as detailed in Science for August 14th. (You can click here to see a summary — but click the link in any case to see what it's like to have a single article with 179 coauthors!) Prior to Fermi only seven of the roughly 1,800 known radio pulsars were known to emit gamma rays. The Fermi observatory's principal instrument, called the Large-Area Telescope, found most of these high-energy sources in locations previously identified by Compton. Many are associated with supernova remnants like CTA 1.

Pulsars emit their radio energy in narrow beams; we "see" only the ones whose rapidly spinning beams happen to sweep across Earth. But their gamma-ray emission appears to be spread in very broad fans, making them rather easy to detect by Fermi. Because of this, astronomers believe the gamma rays are created high above the pulsars' surfaces — though they don't know how just yet. Get more details in press releases from NASA and the University of California at Santa Cruz.

A second article in the same issue of Science (this time with only 167 coauthors) describes how NASA's newest space observatory has identified gamma rays emanating from the famous southern-sky globular cluster 47 Tucanae. The source appears to be very old pulsars with spin periods merely milliseconds long.

This result isn't particularly surprising. Globulars contain lots of very old stars (10 billion years or more) and, due to their crowded conditions, lots of binary stars. Astronomers had estimated that 47 Tuc contained 30 to 60 millisecond pulsars, a couple dozen of which had already been found at radio and X-ray wavelengths. Fermi can't isolate individual gamma-ray sources within the cluster, but the total emission it recorded argues for no more than 60 millisecond pulsars in all. Moreover, the radiation doesn't seem to be coming from just one or a few super-bright objects.

The Fermi observatory should continue operating for at least another four years. So in the months ahead, I suspect you'll be hearing about discoveries involving other forms of cosmic exotica like supermassive black holes, merging neutron stars, and streams of hot gas moving at relativistic speeds. So stay tuned!

If the globular cluster 47 Tuc is some 10 billion years old, how can it contain millisecond pulsars? Pulsars slow down with age so these should be slower spin rates observed. Seems like a dating conflict here.

It does seem puzzling that the oldest pulsars are the ones with the fastest spin, but that really is the case. These millisecond pulsars were neutron stars that were parts of binary systems. Long after they had slowed down as normal pulsars, they were spun up again by the accretion of matter from their companion (appearing as X-ray binaries). Eventually, they were re-born as extremely fast pulsars. They are sometimes called recycled pulsars. Although they spin very fast, they are not slowing down nearly as fast as young pulsars, so they can live a long, long time as fast pulsars. Many of the millisecond pulsars are found (by radio telescopes) in old globular clusters.

Kelley Beatty wrote a very nice posting. I only wanted to add that the August 14th issue of Science has a THIRD Fermi pulsar paper, where we describe the discovery of gamma-ray pulsations from 8 millisecond pulsars in the Galactic "field", that is, outside of globular clusters. No MSP had ever been clearly seen in GeV gamma-rays before Fermi (EGRET on CGRO faintly saw one of our 8).

We're also a bit proud of the nice cover art for that issue.