An international team of scientists has teased apart the secrets hidden inside a meteorite from Mars. 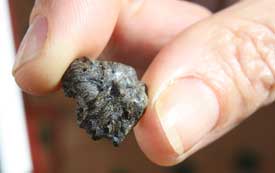 When Tissint hit Earth”™s atmosphere, it exploded into hundreds of tiny shards, like the 3.4-gram piece pictured here. The heat of the impact burned the outside of Tissint black, a coating called a fusion crust. Small patches of the meteorite poke through the crust.

A meteorite that fell in Morocco last year might contain the freshest evidence for water on Mars, according to a study published this week in Science.

The meteorite, named Tissint after the town nearest its landing site, was identified as a Mars rock in January. Now, Hasnaa Chennaoui Aoudjehane (Hassan II University of Casablanca, Morocco) and her colleagues report that Tissint contains evidence of Martian soil — and that soil appears to have been altered by water.

Meteorites from Mars are nothing new. Over the last 4 billion years, giant meteorites have struck the Red Planet, blasting Martian rocks into space. Many of these rocks eventually hit Earth, where researchers can identify them as Martian based on the bubbles of atmosphere trapped inside. Meteorite hunters have found roughly 100 Mars rocks that have landed on Earth in this way.

But Tissint is special. Most Mars meteorites sat for months or years on Earth’s surface, encountering rain and humidity that confuse any evidence of Mars water they might contain.

Tissint is fresh. Eyewitnesses saw it fall to Earth at 2 a.m. on July 18th, 2011, and, because the Moroccan desert is dry and rainless, Tissint likely touched no water during the 2 months it took to recover all the pieces. This makes Tissint the freshest, least-contaminated sample of Mars that we have.

So if Tissint records evidence of liquid water, it’s Mars’s water — not Earth’s. Aoudjehane and her team believe they see just that. 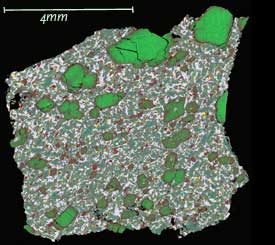 This polished slice of Tissint has been color-coded to show the minerals that make up the meteorite. Large green minerals called olivine grew as the lava sat underground. Reddish rims around the green crystals hint that the composition of Tissint”™s lava was changing as the olivine formed. Tiny crystals of other minerals formed after the lava had erupted and cooled (small patches of white and blue). This polished slice closely resembles similar slices of Hawaiian basalt.

Tissint originally formed when lava erupted onto the surface of Mars and cooled quickly in the cold Martian air. Then 700,000 years ago, an impact blasted Tissint from Mars, melting some of the rock into tiny veins of black glass that now crisscross the meteorite. (Similar rocks from Mars are also roughly 700,000 years old, suggesting the same event ejected them into space.)

When the team performed chemical analyses of these veins, they found evidence of melted soil, perhaps melted by the heat of the impact. The chemical signature they found could only be explained by water interacting with the soil at some point before the rock was blasted off Mars.

Interestingly, Aoudjehane’s team found chemical signatures that indicate the water was unlike most Earth water – it was highly acidic. Researchers working on the Spirit and Opportunity rovers, and several satellite spacecraft, have come to the same conclusion: past water on Mars was acidic, at least for a time. Why all the Red Planet’s water became acidic, when, and for how long is still unknown.

With Tissint, though, researchers finally have what all of the Mars rovers, satellites, and meteorites could not deliver: a pristine rock to study — and one that is actually on Earth.

Guest blogger Selby Cull is a planetary geologist at Bryn Mawr College and studies the mineralogy and geochemistry of the Martian surface. She is also a former intern at Sky & Telescope.

This meteorite is said to be from Mars with olivine. However Curiosity is finding rocks apparently quite different than this composition. 'Mars Rock Touched by NASA Curiosity Has Surprises', http://www.sciencedaily.com/releases/2012/10/121012004808.htm

What about the famous ALH84001 from August 1996? Is Curiosity finding rocks that conflict with these martian meteorite identifications? That would seem to be a big problem.

I have one question. What is all this excitement about possible water on Mars?

Water has been found in numerous places in space. Really, I suspect that there is a notion that if water is present, so life will be too.

Now every true scientist knows that life requires much more than just the right conditions and the right chemistry.

Life more importantly also requires coded information about what to do with the right chemistry in the right environment.

Since all codes are languages and all languages are codes, it seems hard to imagine why there is such a stiff resistance to the concept of intelligent design in biology.

All the evidence points directly toward that concept. Sagan has claimed that science will follow the evidence where ever it leads. However, that has been shown to be a completely disingenuous claim.

If every grain of sand on the beach where a scrabble letter, no one would ever find a copy of "20,000 Leagues Under the Sea" just stretched out along the shore, no matter how long one would search.

Everyone knows that, but still, some folks claim that life must have somehow self-assembled in an ancient warm mud puddle.

I suggest that such a notion is completely unscientific and unreasonable.

Quizzical, I had to post a comment in agreement with your excellent points. The “stiff resistance to the concept of intelligent design in biology” and, by extension, the other sciences builds up a wall of peer pressure that suppresses contrary viewpoints. People tend to go along to get along, no matter what the profession. Extending your analogy, not only would “no one ever find a copy of ’20,000 Leagues Under the Sea,’” no one would ever find any accidental arrangement of any other lengthy work of literature of any language either. If life is found in other places, it will be because the great “Code Writer” worked there as well.

here we go again. people that are so anxious to get some kind of proof for intelligent design just don't understand the theory of evolution or a theory for that matter. science is as far away from religion as you can get. scientists have nothing against intelligent design as long as it is presented so that the evidence can be peer reviewed. once the data confirms the evidence strongly then a theory can form. A theory can never be proven, so please stop the nonsense and present the evidence to the scientific community. please stop the “stiff resistance to the concept of intelligent design in biology” talk because you believe it. show your data, who is behind this resistance.

The excitement over water is excitement over atheism. Where there is water, there may be life; if we can find life elsewhere in the solar system, that would strongly suggest life can form on its own, sans a Designer. Finding life on Mars would not prove there is no God, but it would add a lot of weight to the argument. Sina is moving the goal posts. Most believers have no problem with evolution, only origins, and seek no “proof.” We only point to evidence. Evolution does not explain the origin of life; it explains change and diversity. The Big Bang theory does not explain the origin of the universe; it describes it. The universe appears designed, which nobody can deny. Many have tried to "explain it away," but that is not the same as explaining it. Evidence is not proof; it’s just evidence. No serious student of the subject would ever claim to have proof of God’s existence. We are just saying the evidence is everywhere, all around you, if you just look.

That’s an eloquent, thought provoking comment Peter. I think that by and large you are correct in your answer to the motive behind the excitement over water on Mars. There are other motives too however, such as understanding the formation of the planet and the solar system in general, and also a forward looking desire to see how Mars might be utilized in the future. Perhaps where Sina Sadjadi is from they are more careful to present evolution as an unproven theory, but here in the States and likely even more so in Europe organic evolution is widely touted as an established fact, and in some Communist lands those who object to it have often been punished. In the west, people who dare raise objections are often looked upon as though they must still think the world is flat, when in reality they are just looking at things from a logical viewpoint, as Quizzical did in his comment. Ironically, Sina questions the existence of resistance to intelligent design even as he joins in adding to it himself. But Peter, I think you go a little too far when you say that “most believers have no problem with evolution itself,” and I’m sure that Rod would agree with me. But your last sentence beautifully reminded me of why I personally believe in creation by an intelligent, purposeful Designer, which is expressed better than I can at Romans 1:20. While I can’t provide a scientific answer to the question in Sina’s very last phrase; “who is behind this resistance,” I can provide a Biblical one; see 2nd Corinthians 4:4, 1st John 5:19 and then Matthew 4:8-10.