Unlike a human heartbeat, a black hole’s “heartbeat” is mysterious and rare. Recent observations suggest that the universe harbors at least two black holes with signals that resemble the heart’s lub-dub as measured by an electrocardiogram (EKG). Moreover, one of these cosmic heartbeats may arise from the smallest black hole observed yet.

The regular, sharp peaks in the X-ray radiation coming from the black holes have no physical relation to the beep-beep that signals life: the pulses are thought to come from X-ray flares. The black holes don’t produce the flares by themselves. Each exists in a binary pair with a star from which it siphons material, creating a superhot disk of accreting gas around the black hole. It's the disk that emits the intermittent X-rays. Over the past 35 years, scientists have observed many such systems, and with few exceptions the majority exhibit four types of flares that vary in duration and magnitude over the course of the black hole’s evolution. 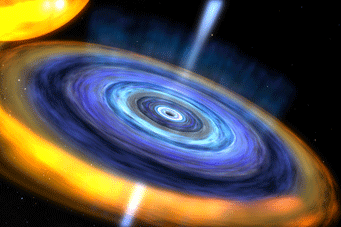 In this highly stylized illustration of a black hole binary system, a wind from the hot inner disk is just kicking up, starving the powerful jet of its fuel.

One of those exceptions is GRS 1915+105. The system contains a roughly 14-solar-mass black hole and puts out more than a dozen distinct classes of X-ray signals that vary in periodicity as well as intensity, leaving astronomers somewhat perplexed by the assortment. Until recently, this binary was considered an anomaly because it was also the only system to display the so-called heartbeat signal.

No one knows for sure what causes this rare pattern in the system’s X-ray radiation. One idea is that the black hole’s accretion isn’t constant, but flips itself on and off, in turn flicking on and off a jet of material that shoots out from the innermost regions of the gaseous accretion disk. In this case the black hole has a love-hate relationship with its food: when the disk’s inner regions heat up, the radiation creates a strong outward wind that temporarily shuts off accretion and the jet, damping the pulse. But without any comparable system scientists couldn’t confirm any theories based solely on GRS 1915+105.

Recent analysis of the black hole binary IGR J17091-3624 using NASA’s Rossi X-ray Timing Explorer (RXTE) now indicates GRS 1915+105 is no longer alone. An international team of scientists reported a remarkable similarity between the X-ray signals measured by RXTE from IGR J17091-3624 and those of GRS 1915+105 in the December 1st issue of Astrophysical Journal Letters.

“I think it’s fantastic that another system displays behaviors like GRS 1915+105,” says Jon Miller (University of Michigan), who was not involved with the research. “Now it seems possible that the behaviors observed in GRS 1915+105 are more general and may have much to tell us about both stellar-mass black holes and supermassive black holes in galactic centers.”

In addition to helping astronomers learn more about the mechanisms that drive these unusual X-ray signals, the new observations suggest that IGR J17091-3624 might harbor the smallest black hole yet discovered. Although the time between beats can vary from a few seconds to well over a minute, IGR J17091-3624’s signal still oscillates faster than GRS 1915+105. One explanation for this quicker pulse is that IGR J17091-3624 has a black hole less than 3 times the Sun’s mass — the approximate threshold that separates neutron stars from black holes.

“Just as the heart rate of a mouse is faster than an elephant’s, the heartbeat signals from these black holes scale according to their masses,” said the paper’s lead author, Diego Altamirano (University of Amsterdam), in a press release. The explanation isn’t conclusive, though, and he and his colleagues intend to study the two systems in further detail. “We need to slowly get the most important pieces of the puzzle.”

You can watch a video simulation of what may be going on around the black holes on NASA’s news site.