Everyone loves a good mystery story, and in all of astronomy few can come close to a long-running saga called "The Case of the Two-Faced Moon."

In Act I, Gian-Domenico Cassini discovers, in 1671, a strange satellite orbiting Saturn — or at least a moon he sees half of the time. He can spot Iapetus, as it came to be called, when it's on one side of Saturn but not the other. In Cassini's words, the moon goes through "a period of apparent Augmentation and Diminution." His puzzlement is understandable, as astronomers eventually realize that half of Iapetus is as white as snow and the other half dark as charcoal.

In Act II, planetary astronomer Steve Soter posits in 1974 that Iapetus is an otherwise icy satellite with one hemisphere that's become coated with dark dust. The proposed source of this face paint is Phoebe, the next large satellite outward, which is circling Saturn "backward," in a retrograde orbit. Soter argues that dust blasted off Phoebe by impacts eventually drifts inward and splatters onto the side of Iapetus that continuously faced forward in its orbit. But others argue instead that something has oozed from the moon's interior and blanketed its dark face.

Voyagers 2 confirms the moon's bizarre nature when it visits the Saturnian system in 1981. But it comes no closer than 600,000 miles, too far away to reveal what's really going on.

Act III begins with a close flyby of Iapetus just a month ago, on September 10th, by the Cassini orbiter. Swooping past at a distance of just 1,000 miles, the spacecraft scrutinizes the strange moon's surface with telescopic cameras and probes its chemistry with sensitive spectrometers. Then the scene shifts to Orlando, Florida, where planetary specialists from around the world have gathered to learn just what Cassini saw. 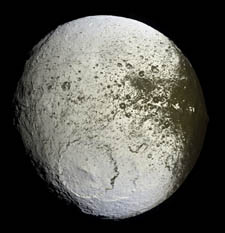 NASA's Cassini spacecraft saw the white-as-snow side of Iapetus at close range in September 2007 and captured this false-color view. Along the right edge is the complex transition region between the moon's bright and dark hemispheres. Below center is a yet-to-be-named impact basin that's 280 miles across. Click on the image for an enlarged view.

Iapetus might not be colorful, but it's still a stunning study in black and white.

Soter and other "externalists" apparently got it right. The dark half of Iapetus is covered with fine, ice-free material that's knee deep in places. It's "a remarkably fluffy surface," reports Bonnie Buratti (Jet Propulsion Laboratory, exactly what would result from a gradual build-up of fine particles raining down from above. The chemical make-up remains unclear, though carbon compounds are present, and researchers can offer only educated guesses as to its source. Phoebe is still in the running, though its surface isn't a perfect spectral match.

But the scientists meeting in Florida at least can agree on what happened after the dark stuff arrived. Midday temperatures on the dark face, named Cassini Regio, can climb to –220° — a long way from Orlando's swelter but warm enough to make water ice turn to vapor.

"The reason Iapetus gets so warm is that it rotates so slowly," explains John Spencer (Southwest Research Institute). Its leisurely 79-day-long spin, in synch with its orbital period around Saturn, lets the dark side bake in sunlight for weeks at a time. Once vaporized, the water migrates to colder climes on the back side and at the poles. And it's a runaway process that keeps driving the water out. According to Spencer's calculations, it'd take less than 100 million years to create the stark dichotomy seen today.

We don't yet know what the dark stuff is or where it came from. Those answers will come in time. But I'm sure that Cassini would have been pleased to see, 336 years after first spotting this two-faced moon, that modern-day astronomers are just as fascinated by it as he was.

Could this "fluffy stuff" possibly be dark matter? its very unlikely but it makes up most matter of the universe so shy couldnt it finally show up here?

Upon looking at several photos from the Sept. 10 encounter with Iapetus, one thing became clear. On the white side, there are a lot of craters with black bottoms. But on the black side of the moon, there are no craters with white bottoms.

Clearly, the impactors are punching through a white layer on the white side, exposing a dark layer underneath. I would say that whatever coated the trailing hemisphere came a little later than the formation of Iapetus, since many of the craters, some within a few kilometers of a black-bottomed crater and about the same size, have the white coating. I would say the white bottomed craters are older and were covered over with snow.

Publish images of the white side and the black side of Iapetus side by side and you will plainly see what I mean. Closeups are even more startling.

I am not a professional scientist, but I usually consider myself to be very well educated. I am more that a little confused about what the professionals are saying in the article. When I look at the pictures, I see a black rock that looks like it was hit by one or more huge snow balls (maybe comets?). Why are the scientists saying that the rock is white and the matter covering the dark side is black. Are we looking at the same photos? Are we looking at some sort of negative image? If so, then why don't they reverse the published photos so that they looked to the human eye the way the moon is described? Can anyone explain?

I think there is no doubt, it's dark over white. Prior to those new pictures there is this doubt, but now there is no more.
And if it was "dark matter", why only on Iapetus?
Let's wait for more data.

We've found lots of dark material on Titan. Could it have been ejected by a volcanic eruption and splatered onto Iapetus?

Damn right Emmert. It looks like my car after moving to the right through some serious snow. None on the front, but on the back it collects. Looks like a black orb covered in white. The white seems to prefer the highlands of the bulge, too. Also, notice how the leading wall of the primary crater is black where it is steep. This is a black body being airbrushed in white.