The fireball that exploded over Russia last week left a wake of destruction but thankfully no lost lives. Here's what S&T's staff has managed to piece together about what happened. 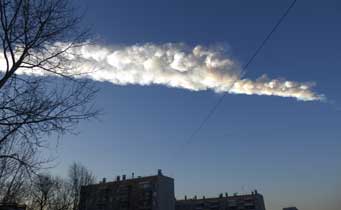 On February 15th a meteor blast over the Russian Chelyabinsk region wowed the world.

The bolide streaked through Russian skies at 9:20 a.m. local time and outshone the Sun. One minute and 28 seconds later, shock waves from its deceleration and explosion collapsed walls and blew out roughly 100,000 square meters (1 million square feet) of windows. (The delay is due to the speed of sound being much less than the speed of light.)

The meteoroid exploded almost directly over Chelyabinsk, an industrial city of about 1 million people. Damage varied widely, even within the same building: shock waves behave like bouncing balls, bludgeoning some buildings and sparing others depending on how they’re directed and how well they resonate with certain materials (glass is particularly vulnerable). More than 1,000 people were injured, mostly by flying glass. (One amazing photo of this damage is from a theater in Chelyabinsk.)

Collected fragments are ordinary chondrites, meteorites that make up more than 95% of all stony meteorites recovered. Despite early reports that the event blasted a hole in the frozen Lake Chebarkul, about 80 km (50 miles) west of Chelyabinsk, it’s now unclear whether the fireball and the hole are actually related.

By an amazing coincidence, the impact occurred just 16 hours before the predicted flyby of asteroid 2012 DA14, whose estimated diameter of 50 m (160 feet) is more than twice as big as the Russian meteoroid’s estimated size. But the two objects were moving in completely different directions: the asteroid moved south-to-north, the bolide east-to-west. Initial calculations put the outer end of the Russian object’s former orbit in the asteroid belt, unlike 2012 DA14’s, which has an orbit similar to Earth’s.

“This is not related to 2012 DA14,” says Peter Brown (University of Western Ontario, Canada). “This is perhaps the most certain aspect of the entire event.”

While 16 hours might seem a short period of time, Earth moves about 30 km/s (67,000 mph) through its orbit, meaning that in those few hours the planet traveled more than 1 million miles. 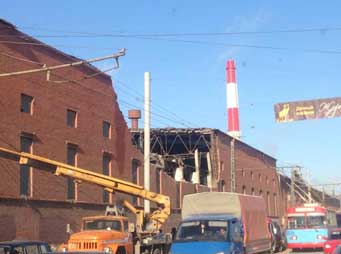 Shock waves from the meteor shattered windows and damaged structures, including the roof of the Chelyabinsk Zinc Plant, which collapsed despite its steel beams.

Brown’s analysis suggests the meteoroid entered Earth’s atmosphere at about 20 km/s, a speed typical of NEOs. It entered at a grazing angle of less than 20° and burst at an altitude of 20 to 30 km. Based on ground-based infrasound measurements, between 20 and 30 seconds passed between atmospheric entry and the meteor’s airborne disintegration. The estimated explosive energy, equivalent to 470,000 tons of TNT, corresponds to about 30 Hiroshima bombs. Given a chrondritic composition, that energy release implies that the original object had a diameter of about 17 m (54 feet) and a mass of about 10,000 metric tons.

An event of this magnitude happens about once per century. It’s the biggest known impact since the Tunguska explosion in 1908, which exploded with 185 Hiroshimas a mere 8½ km above the ground and flattened trees covering 2,000 square kilometers of rural Siberia. The most recent event was a fireball over Indonesia in 2009, with an estimated energy of 50,000 tons of TNT.

Thankfully no one was killed by the Chelyabinsk event, but that’s no guarantee for future safety. The one-two combo with 2012 DA14 should serve as a wake-up call, experts say.

“It’s one thing to talk in the abstract about blown-out windows, et cetera,” says Dan Durda (Southwest Research Institute). “It’s quite another to be reminded that there are very often people behind and under that shattered glass. That’s why we care about these events and that’s why it’s worth the investment to survey for smaller NEOs and to plan for preventing larger impacts.”

Brown adds that the value isn’t just in startling us from our cosmic doze. “The major significance is that this is the first well-documented event which has clear ground-level effects,” he says. “This will permit calibration of entry models for tens-of-meter-sized objects for the first time.”

Such small objects are difficult to track, and of the 9,500 near-Earth asteroids discovered so far most are less than 300 m (1,000 feet) across. Former astronaut Ed Lu, who now head the B612 Foundation, estimates that we’ve only found 1% of objects the size of 2012 DA14.

Robert Naeye and Kelly Beatty contributed to reporting for this blog.

I've done some research, and found that the Russian chondrite meteorite has the same composition as the S-type asteroid 2012 DA14 that passed near earth. Earth's magnetosphere and the interplanetary magnetic field, can produce magnetic anomalies, that could change the trajectories of associated traveling fragments that become fireballs. I've written a story about this on my website at http://holographicgalaxy.blogspot.com
I do not believe it was all a cosmic coincidence.

Since more than 95% of all recovered meteorites are ordinary chondrites wouldn’t it also follow that more than 95% of their parent bodies would have also been ordinary chondrites too? Therefore the odds of any two random NEO’s being chondritic would be more than .95 x .95 = .9025 or 90.25%. IMO due to their vastly different trajectories any possible “common origin” of these two asteroids would have been way out in the asteroid belt in the very distant past.

Isn't it conceivable that a cloud of debris might exist, all in a similar orbit, like cometary debris? This might occur because of thermal stress, or impact. It these objects have a V similar to the earth's orbital speed, the earth's motion and gravity field will bend the orbit- like it seriously deflected DA14. If this object came in from the same direction (south) and the earth moved into it would bend the orbit, and if it did half an orbit before impacting- it would appear to come from the opposite direction.

Only 17% of all asteroids are S-type asteroids.S-type asteroids have a stony chondrite composition similar to the Russian meteorite samples. 87% of all meteorites are also stony chondrites.This means that 83% of the time, different compositions will rule out a relationship with an asteroid. In this case, there is substantial probability for a related event, considering fireballs were also sighted in San Francisco and Cuba.

Asteroid impacts like this are extremely rare, but not multiple tornadoes from a supercell. These storms have lightning that sets off car alarms, high winds in a gust front that knocks down vulnerable structures including trees, hail that can smash car windows, and then the worst sort of tornadoes. On April 25, 2011 after several hours visiting my father at a nursing home in Florissant, Missouri, I cut the visit short to take I-270 400 yards away, to my brother's house 15 miles to the east to escape a line of thunderstorms that were brightly illuminating the night sky to the west. Tornado warnings also were on the news, and I tried to get my brother and his wife to leave when I did. I did the right thing as within 5 miles away a F-2 tornado smashed a wall of windows at St Louis International Airport as caught by security cameras, as it shoved vehicles around in the parking lot. A F-4 tornado was caught as a debris ball on local radar also close to the nursing home. Later a F-2 tornado did damage in Granite City, IL 3 miles from where I spent the night. My brother, his wife, my father, and the people where I stayed got through the storms just fine, and I did not have to worry later about police possibly closing off the area or my car wrecked because I decided to risk a tornado away from home. Tornado-damaged areas look like the Russian city that was close to the asteroid explosion. Insurance experience with tornadoes may help asteroid damaged areas as well.

“This innocent asteroid was run over by Earth,” says Lindley Johnson. Wait a minute. That’s like blaming the airline when geese fly into the engine intake. According to the United Federation of Planets, the Earth has the right-of-way in its orbital corridor.

I wished they had said more about the B612 Foundation. They are trying to build and launch a space telescope that would search for more objects that might collide with earth. Kinda important, right?

It ok banging (pun intended) about some big meteors but every one forgets this buety...

More common than we thought perhaps? Perhaps a wake up call for Barmy O'Bamha to inject some more dosh in to a decent spaceprogramme...

The article says:
"Earth moves about 30 km/s (67,000 mph) through its orbit, meaning that in those few hours the planet traveled more than 1 million miles."

I'm not sure how that is relevant when 2012 DA14 is in a nearly parallel orbit with Earth and also travelled over a million miles in the same time period.

The recent meteor that exploded over Russia brought on a lot of people to head to the hospital for accidents and call insurance businesses to fix home damage. Most insurance corporations were able to cover the damage, but you may not be so lucky. You may even need a personal loan cash advance to help pay for damage that happens to your home. Get more info at: Payday Loan Cash Advance

A meteor erupted over Russia last February, raining fiery meteorites over a big, populated area. There were not deaths, but there was a ton of damage to properties. Many of those homeowners are most likely wondering if their insurance plans cover the damage. I found this news from here.