The disabled space telescope's prolific planet-hunting run is officially over, as the team abandons efforts to salvage its full pointing ability and focuses on data analysis. Its next mission? Hunting for a job. 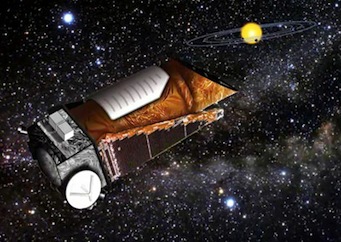 An artist's rendering of the Kepler space telescope. After over four years of searching for transiting exoplanets and racking up about 3500 planetary candidates (with more to come), its intended operations are at an end.

The Kepler space telescope, which discovered thousands of potential alien worlds transiting their host stars before suffering a mechanical failure three months ago, is officially ending its high-tech planet hunt, its team announced on August 15th. After running tests last week, the team concluded that its reaction wheels — the spinning flywheels that orient the craft — are too damaged to hold it steady enough to continue its careful search. The team will now focus on analysis of Kepler’s backlog of data while NASA explores alternative missions for the disabled craft.

Kepler was built with four reaction wheels. It can get by with three, as it did when one ground to a halt in July 2012. But when it lost another in May, the jig was up. On only two wheels, the telescope drifts, robbing it of the precision it needs to see the silhouettes of planets flitting in front of the disks of their stars.

The team managed to loosen the wheels in July during tests that Kepler deputy manager Charles Sobek (NASA Ames) likened to freeing a stuck grocery cart by backing it up and getting it going again. But last week, as the craft performed a downlink to Earth, it could only maintain pointing precision to within 10 arcseconds for a few fleeting hours before the wheel started jamming again, triggering a shutdown to Kepler’s “safe mode.”

In truth, last week’s tests were no more than due diligence. “We really had very little hope that we could recover the wheels,” said Sobeck, adding that in all its experience, NASA has never seen a wheel rally from such a degraded state.

But let’s note that Kepler did reach its designed lifespan of three and a half years in late 2012. The team pushed for more time because Kepler’s precision revealed that sunlike stars have fluctuations in brightness that hurt the mission’s transit data quality.

“We’ve Got to Dig Down Hard” 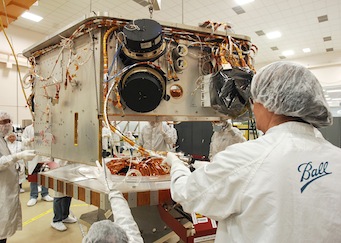 Two of Kepler's four reaction wheels can be seen in this pre-launch picture near the upper left. These spinning flywheel-like devices maintain the craft's stability like a gyroscope. Kepler needed at least three of them to hunt for planet transits. When one failed in 2012, with a second showing signs of trouble, the team began building breaks into Kepler's schedule to rest them â€” to no avail.

So the Kepler mission is over, right?

“That is — that is a terrible mis–misstatement!” sputtered Kepler’s normally soft-spoken principal investigator Bill Borucki (NASA Ames). The current count of about 3,500 planet candidates (another 273 were added just last month) includes hundreds roughly the size of Earth, but that comes from only two years’ worth of data. There are still two more years to analyze.

Despite Kepler’s untimely demise, Borucki said Kepler has collected enough data to answer the question that inspired it: “Are Earths common or rare in our galaxy?” Earth-size exoplanets now seem to be dime-a-dozen, although with the data currently processed, astronomers can only say so with certainty for red dwarfs, stars smaller and cooler than the Sun. The habitability of such systems remains unknown. Will the rest of the data be enough to reveal Earths around stars just like our own? “We’re not going to get lots and lots of such planets,” said Borucki. But he thinks that, when the data are fully excavated (an effort that should take three years), there will be at least a few terrestrial twins.

Meanwhile, NASA is turning to the scientific community for ideas about how to control a two-wheeled Kepler and what science might be done with it. The concepts already submitted cover an enormous variety of science, said Borucki: hunting for asteroids, comets, supernovae, and, yes, exoplanets — but this time via gravitational microlensing. Another idea is for Kepler to become its own follow-up mission and reobserve its most promising potential planetary systems. But it remains to be seen whether any of these ideas are feasible. And even if they are, Paul Hertz, NASA’s astrophysics chief, noted that NASA headquarters will have to weigh the costs and benefits of funding a hobbled Kepler against new, fully functional missions.

In His Own Words 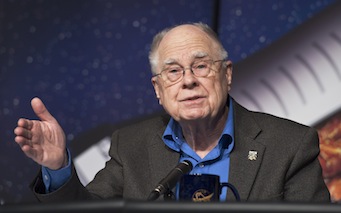 As for Kepler’s legacy, late in Thursday’s media briefing, Borucki let loose with an impassioned speech. I’ll let him have the last word:

"[Kepler] is critically important to mankind’s future. We are looking at the idea of exploring our galaxy, one step at a time. We have found that there are planets in our galaxy, there are many planets, there are Earth-sized planets. And now we’re looking forward to TESS, which will tell us about planets around nearby stars. And then we’re looking forward to the James Webb Space Telescope, which will tell us about the composition of the atmospheres.

“So this is a step. One step among many, but it’s a crucial step. If we had found there were very few Earths, our exploration of the galaxy might be very, very different. We might not choose to explore it. So it’s a critical step in mankind’s understanding of its place in the galaxy and what life might be out there.”

No telescope in space should ever,ever be wasted.
Surely it can at least do planetary work.

Why not design a bolt-on replacement system and give robotics a try?

Why are we so cheap as to only put 4 wheels on it?

This is extremely short - sighted.

“No telescope in space should ever, ever be wasted.” Well said Mike. Certainly not one with an aperture of 0.95 meters. But Kepler wasn’t build to take pretty pictures. See this page: http://www.kepler.arc.nasa.gov/Mission/QuickGuide/MissionDesign/PhotometerAndSpacecraft/
for details as to what’s fixed in Kepler’s focal plane. Therein you can also read about how the craft collects data with its array of CCD’s. It was designed to focus light from each individual star onto a few pixels, and these are read every six seconds to prevent saturation. So now the scope will slowly drift, which would produce star trails instead of spots on the data collector. But why can’t this be corrected computationally? Sure, data will be lost on the edges as stars drift out of the field of view of each CCD, but it seems like much data could still be salvaged. What do you astrophotography experts think?

Since it's already bought and in orbit, use it!! Whatever capabilities it has come at far less cost than developing, purchasing, and launching a new craft.

Bring on the innovation to use an asset that we already have!

Can we make a robot gyro package that would fasten on the back of the scope that would over ride the gyros on board?

Unfortunately a robotic mission to correct the problem would cost about as much as a replacement mission, especially since Kepler is in heliocentric orbit, not Earth orbit. As for why there were only 4 reaction wheels, i agree that extra redundancy for wheels and for gyros (which also frequently fail) would make sense; however, every bit of added mass requires a lot more fuel to put it into orbit (exponential relationship, i believe). In practice, the launch vehicle has a fixed lift capability, so any added mass for attitude control subtracts mass from the science payload. There is a follow-on mission, TESS, that will be exciting to read about.