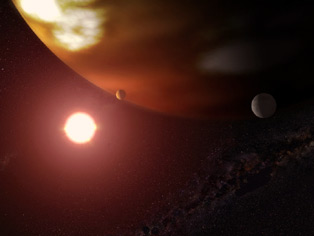 Any planet that orbits comfortably close to a red dwarf star will have
eternal day on one side and eternal night on the other. But it still could
be a nice place to live.

The commonest stars in the universe aren't very Sun-like, but they could still have life-bearing planets, say Jill Tarter and Peter Backus (SETI Institute) and 30 coauthors in the February issue of Astrobiology.
Red dwarfs comprise about 75% of the Milky Way's stars. Each is so dim that its "habitable zone," where a planet could have liquid water on its surface, is very narrow, only 2% to 20% as wide as the Sun's habitable zone. And it is so close to the star that any planet within it will have its rotation tidally locked so that one side always faces the star, the same way that one side of the Moon always faces Earth. Thus half of the planet will have eternal day, the other eternal night.

The night side, scientists have thought, would be so cold that the entire atmosphere would freeze out onto its surface, leaving the planet in a vacuum. But that's not necessarily so, according to the paper. A thick atmosphere on such a world would circulate strongly enough to equalize temperatures. In addition, a thick atmosphere could shield the surface from ultraviolet and X-ray flaring that red dwarfs display early in their long lives, and might withstand the flaring well enough not to be driven off.

As for the narrowness of the habitable zone, the spacing of planets around low-mass stars is probably narrower too, partly compensating for the problem.

These findings imply that red dwarfs are reasonable targets for astrobiology studies, including SETI searches for artificial radio signals from alien technologies.

Such a "targeted" search of individual stars is part of the plan for the Allen Telescope Array (ATA), a cutting-edge radio telescope now partly completed in northern California. Construction has stalled at 42 dishes out of a planned 350 due to lack of money. While fundraising efforts continue, the first 42 antennas will be used in concert for a wide-spectrum scan for signals along the plane of the Milky Way near the galactic center.