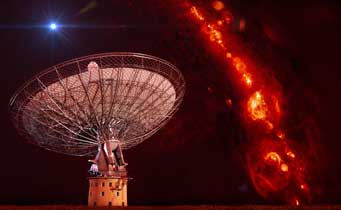 Artist's impression of the 64-meter Parkes radio telescope shown with a bright radio burst blazing briefly far from the Milky Way's disk (red swath at right). The Milky Way image is from a hydrogen-alpha full-sky map.

If you’ve been waiting for mysterious radio signals from space, tune in. An international team of astronomers has detected four powerful bursts that appear to come from billions of light-years away. At that distance, the radio pulses would each have put out in a few thousandths of a second the same amount of energy that the Sun would need 10,000 years to emit.

The bizarre signals came to light as part of the High Time Resolution Universe survey, a project using the 64-meter Parkes radio telescope in Australia to search the sky for radio blips and pulsars, the spinning-lighthouse-like stellar corpses left behind by some supernovae. Because the pulsars we detect lie in our own galaxy, astronomers mostly look near the Milky Way’s plane when hunting for these zombie stars. But when grad student Dan Thornton (University of Manchester, U.K., and CSIRO, Australia) started digging through normally “boring” data far from the galaxy’s dusty gleam, he stumbled across the four enigmatic bursts.

The fast radio bursts (or FRBs) have a distinct look to them. They’re incredibly energetic and über-short, but their lower frequencies arrive noticeably later than their higher ones, spreading out the signal into a unique shape. This spreading happens because the lower radio frequencies interact more with intervening electrons, either in the Milky Way itself or the so-called intergalactic medium, the stuff between the universe’s massive stellar metropolises.

The pulse shape encodes how much stuff lies between us and a source, and the spread in these narrow signals’ arrival times implies that they came from far beyond the Milky Way. Throwing some assumptions into the mix, Thornton and his colleagues estimate the four bursts originated at redshifts from 0.45 to 0.96, or 5.5 to 10 billion light-years away.

That distance would give the bursts energies between 1037 and 1039 joules, or between 100 billion and 10 trillion times the energy the Sun puts out in a single second — and the FRBs did it in a few milliseconds.

These four bursts aren’t the first to baffle astronomers. In 2007 Duncan Lorimer (now at West Virginia University) and his colleagues reported a bizarre radio blast so strong that the software used to process the signals assumed it couldn’t be astrophysical and deleted part of it from the data. That “Lorimer burst” looks like the new four.

There was also a weird signal reported in 2012, but it’s unclear whether it came from the Milky Way or not. Plus, notes Bryan Gaensler (University of Sydney), a team reported a bunch of unidentified radio bursts back in 1989 that might or might not be similar. “No one knew what to make of that paper at the time, but now it’s somewhat more interesting,” he says.

So what are FRBs? “I don’t think we have any idea what these are,” Gaensler says. “It’s a mystery!”

Thornton and his colleagues also don’t strongly argue for any one interpretation in their paper in the July 5th Science. But Thornton says their favorite idea is that the bursts are giant flares from a highly magnetized stellar corpse called a magnetar. That flare could be created by a massive disruption of the magnetic field after a starquake on the magnetar’s surface, he says.

Beyond the wow factor, FRBs could also be important for cosmic-scale studies. Given the number of signals found and the Parkes telescope’s field of view, the team estimates roughly 10,000 of these go off across the entire sky each day. If the rate is really that high (and with only four events it’s hard to say), astronomers could use them to probe the intergalactic medium. The short duration makes the bursts eloquent snapshots of the turbulence the radio photons encountered en route. Plus, pairing the distances and the pulse’s spread over time could give new information about how much matter is between us and the sources.

Astronomers will need more detections before FRBs live up to that promise. They also need real-time detections (the Lorimer burst and the four new ones were all spotted in data after the fact) and follow-up at other wavelengths to determine the culprits.

You wrote: " the radio pulses would each have put out in a few thousandths of a second the same amount of energy that the Sun would need 10,000 years to emit. (So no, it’s not E.T.)"

Well, that doesn't necessarily follow. It could be E.T. 🙂 It just means that if it *IS* E.T., they have super-technology, and we may as well surrender now and get it over with. I, for one, welcome our new electromagnetic overlords.

Nature reported yesterday the discovery of powerful and enigmatic millisecond radio bursts arriving at the Earth from beyond the Milky Way Galaxy(estimated to be 10,000 events per day!).

Magnetars are the initial candidate source considered since the sources must be ultracompact and very powerful.

But perhaps we are seeing a unique signature of the vast population of primordial black holes predicted by Discrete Scale Relativity.

It would be helpful to know where the telescope(s) were pointing during these four events. Also beam width and side-band sensitivity. With so few cases, one has to wonder if these are real astronomical source signals or some local source of noise.
Finally, the BBC released an on-line "news" item that decades old TV shows were being received by a radio telescope; the release was dated April 1. Although we all like to see new and exciting news about the cosmos, we have to be aware that not every news release can be accepted as legitimate news.

@Milone...that was an April Fool's Day prank for Doctor Who...duh!