Insight's robotic arm has uncovered the lander's "mole," as NASA and German aerospace engineers work to get it drilling once again.

Spaceflight is hard, and drilling on an alien world is even harder. But this week, we have some good news: NASA has completed the first stage of getting Mars Insight's heat-sensing spike, referred to as the "mole," back to work. The mole became stuck this past February and has been taking a breather for the past couple months. The first step in NASA's new strategy: grabbing the deployment package and lifting it out of the way to see exactly what is happening.

“We've completed the first step in our plan to save the mole,” says Troy Hudson (NASA-JPL) in a recent press release. “The entire team is elated because we're that much closer to getting the mole moving again.”

Insight landed on the Elysium Planitia region of Mars on November 26, 2018, accompanied by the first set of interplanetary smallsats, Mars Cube One's MARCO-A and MARCO-B, which both chronicled the descent of Insight to the Martian surface.

A dedicated, geophysical science mission, the Insight lander deployed its Heat Flow and Physical Properties Package (HP3) onto the Martian surface using a mechanical arm on February 4, 2019. On February 28th, drilling started via the mole, a mechanical spike designed to drill 5 meters (16 feet) down into the Martian regolith. Trouble came about a week after, on March 7th, when the tethered spike stalled at just 12 inches (30 centimeters) below the Martian surface. The mole needs to reach a minimum depth of 3 meters for useful science operations. The mole is currently stuck at an angle of about 20 degrees off of vertical. 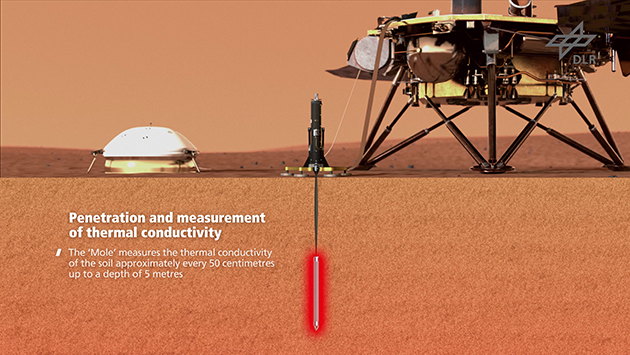 Artist's conception of the mole hammering into the surface of Mars.
DLR

HP3 is designed to detect heat emanating from the core of Mars, data that will help planetary scientists model the planet's interior structure.

NASA's plans called for lifting the HP3 package out of the way to the give engineers a better view of the mole and its progress thus far. This maneuver was not without its risks: for example, if the arm pulls the spike out of the soil while lifting the structure, it cannot place the mole back into the ground.

Engineers first suspected that a rock had blocked the mole, but lab tests offered another option. The mole drills by using the friction of the loose soil flowing around it to counter its own recoil action. Engineers suspected that a lack of friction was causing the hammering spike to simply bounce in place.

Lab tests were conducted at the Jet Propulsion Laboratory in Pasadena, California, with an Insight "twin" working in material similar to Martian soil, in the so-called Mars yard." Tests were also conducted at the German Aerospace Center (DLR), which had developed and built the HP3 package for the Insight mission.

Uncovering the hole hammered out by the mole and getting a good look at it this past weekend provided initial confirmation of engineeers' suspicions: The mole has dug a small pit around itself into the unexpectedly loose soil, causing it to bounce in place rather than dig straight down.

“The images coming back from Mars confirm what we've seen in our testing here on Earth,” says Mattias Grott (DLR) in a recent press release. “This cohesive soil is compacting into the walls as the mole hammers.”

Next, the team wants to get a closer look and use a small scoop on the end of the lander's mechanical arm to press down on the soil around the pit, allowing the mole to regain traction and resume digging. And, although the arm can't grab the mole for repositioning, it could, if needed, push against the spike in an effort to get it to resume drilling.

The mole is designed to push small rocks out of the way, and the landing site and deployment area  for the HP3 package were selected with this in mind. Worst-case scenario is that the mole is striking against a large boulder submerged just below the Martian surface — that would be a tough break after a journey of millions of miles. Or perhaps the site was too well selected: the equivalent of a Martian sand trap offering little friction for the mole.

Insight is busy conducting other science experiments as well. The lander's seismometer recorded its first Marsquake on April 6, 2019, along with another larger seismic event on May 22nd with a magnitude 3.0 marsquake.