An Outburst of Andromedid Meteors

Comet Biela is the source of a nearly forgotten meteor shower that "stormed" in 1872. The Andromedids were surprisingly numerous two years ago. The shower displayed surprising activity this month.

Skywatchers worldwide are readying to view the robust, reliable Geminid meteors later this week. But you might want to head outdoors early — tonight, in fact — based on some interesting news. 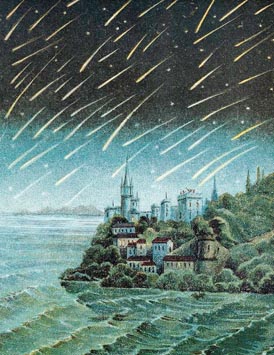 The Andromedid meteor "storm" on November 27, 1872, as portrayed Enciclopedia Moderna Illustrata, published in Milan, Italy, in 1904. Click on the image for a larger version.


New York Public Library
Meteor specialist Peter Brown (University of Western Ontario) reports that the Canadian Meteor Orbit Radar has recorded an outburst from the Andromedid meteors in the past 24 hours. Moreover, he reports, "It is not clear if the peak of the outburst has been reached or if activity may continue to increase."

You'd be forgiven if you've never heard of the Andromedids, let alone that they'd be worth watching. This is a stream of debris shed by the now-defunct Comet Biela, which was discovered three times — in 1772, 1805, and 1826 — before its periodic nature was confirmed. In 1846 this curious interloper returned as two comets traveling side by side.

But Comet Biela is best remembered for the torrent of "shooting stars" it unleashed on November 27, 1872, when thousands of meteors per hour flashed across the sky and Chinese observers noted that "stars fell like rain." In Italy, observer P. F. Denza and three others recorded about 33,400 meteors during a 6½-hour interval! Another storm, though not as intense, ensued on the same date in 1885. 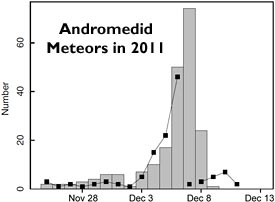 Counts of Andromedid meteors spiked in 2011. This plot compares radar detections (black squares) with a simulation of meteoroids passing within 0.01 astronomical unit of Earth. A gap in the black line is due to loss of data due to antenna icing.

Over time the "Bield" meteors (later renamed Andromedids) has dwindled to near nonexistence. But they returned in 2011 with a zenithal hourly rate of about 50, their strongest showing in more than 100 years. Radar records suggest that the cometary castoffs are quite small and slow-moving, striking Earth at 12 miles (19 km) per second — about the minimum speed possible.

Brown is encouraging amateurs to make visual observations if possible. The radiant is roughly at right ascension 0h 48m and declination +60° — about 10° north of the Andromeda galaxy near the bright star Schedar in the "M" of Cassiopeia. That's nearly overhead as darkness falls, though there's some interference from the waxing Moon.

If it's cloudy tonight, as sadly it will be here in New England, you should still Check out Gary Kronk's comprehensive histories of Comet Biela and the Andromedids.

Brown adds, "It is possible to follow the activity in near real-time as detected by CMOR."

Yesterday at 20:00 UT I received a message announcing this meteor shower, and I was in my observatory!

I tried to see some of these meteors , and I success!!

Here in my website there are one of the 6 meteors I could capture, today I will post the others