Truly dedicated eclipse-watchers — who live in the Eastern Hemisphere — have a chance to watch the Moon barely graze Earth's umbra during the first eclipse of 2013.

A lunar eclipse will take place on April 25th, but it'll go unnoticed unless you're paying close attention to the full Moon's appearance that night. And to see it at all you'll need to be Europe, Asia, Africa, or Australia — this event is not visible from North America. 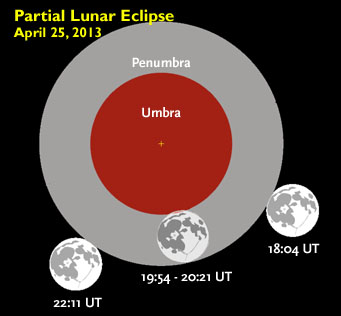 Only 1% of the full Moon's disk enters the umbra during April 25th's partial lunar eclipse, which is not observable from North America.

It's almost deceptive to call this first cover-up of 2013 a partial eclipse. Only about 1% of the Moon's disk (a tiny bite only 0.5 arcminute deep) manages to slip into Earth's umbral shadow, as the graphic here shows. That umbral passage lasts for just 27 minutes centered on 20:08 Universal Time. Eclipse guru Fred Espenak provides more specifics at NASA's eclipse website.

Still, careful observers might notice some dusky penumbral shading along the Moon's northern limb beginning about 19:00 UT and ending near 21:00 UT. And Saturn, perched a few degrees to the Moon's northeast, will add some variety to the scene. Wide-field photographs made with medium telephoto lenses might turn out interesting.

Lunar and solar eclipses often come in pairs, and sure enough April's event will be followed two weeks later (at new Moon) by an annular solar eclipse that's observable in Australia and across the South Pacific. More details are found on S&T.com's Eclipses in 2013 page.