On Thursday, May 29th, Comet 209P/LINEAR will pass just 5 million miles (8 million km) from Earth, one of the closest comet approaches in history.

Comet 209P/LINEAR moves rapidly south through the sky around its closest approach on May 29th.[/caption] Just 5 days earlier, early on the morning of May 24th, Earth is predicted to pass through the debris that lines the comet's orbit, causing a new and possibly spectacular meteor shower. But regardless of whether the meteor shower materializes, the comet itself is an appealing target for backyard astronomers. 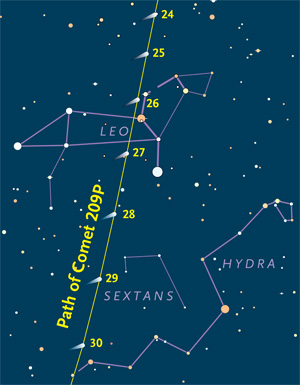 Comet 209P/LINEAR moves rapidly south through the sky around its closest approach on May 29th.


S&T Illustration
Comets are notoriously unpredictable. But with any luck, this one will shine at 10th magnitude from May 24th through June 2nd, making it an easy target through an 8-inch scope from a typical suburban backyard — or through a much smaller scope under dark skies. But the comet is moving rapidly southward through the sky, so it will be invisible from the Northern Hemisphere toward the end of that period.

At its closest approach, 209P will be moving almost almost a half degree per hour — the field of view of a telescope at medium-high power. So you need very detailed charts to locate it. Select one or more from the list below depending when you plan to observe. The times are plotted in Universal Time, which runs 4 hours ahead of Eastern Daylight Time and 7 hours ahead of Pacific Daylight Time. For example, 10 p.m. May 26th EDT is 2h May 27th Universal Time, so at that time you should look halfway between the ticks labeled 0h and 4h for May 27th.

On the evening of 5/10/83, Comet IRAS-Araki-Alcock was in front of the bowl of the Big Dipper. 24 hours later it cruised by M44, having moved more than 40 degrees, and it was naked eye. On 3/24/96 Hyakutake was near the end of the handle of the Big Dipper. 24 hours later it was near the bowl of the Little Dipper, a distance of about 20 degrees, and it was very naked eye! I was lucky enough to observe both those comets on both of the days, the first in Florida and the second in California, and even have crude photos. So 10 degrees and maybe 10th mag is a bit anticlimactic, but it is what it is and we take what we can get. Thanks for the detailed info and especially the detailed charts!

Yes, I was also fortunate enough to see both of those comets. This is not nearly as spectacular. 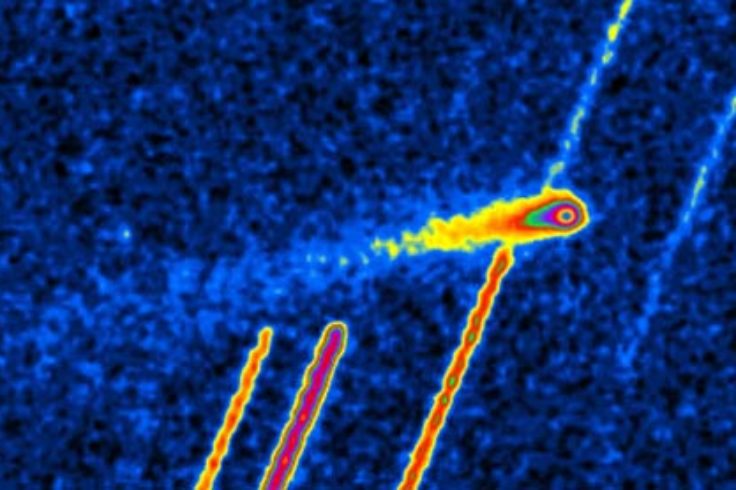 Have You Seen the Zodiacal Light?