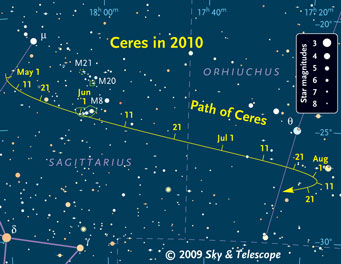 Ceres travels through Sagittarius and Ophiuchus in June through August 2010. Click on the chart above for a larger, printable version in PDF format.

Ceres, the largest and first-discovered asteroid, is the only “dwarf planet” (by modern designation) that's easily visible to amateurs; the next brightest is 14th-magnitude Pluto. Right now Ceres may be familiar to only a tiny portion of humanity, but we can expect it to gain global star status in February 2015 when NASA’s Dawn spacecraft will take up orbit around Ceres and start imaging its unknown landscape in detail.

In late May 2010 Ceres shines at magnitude 7.6, bright enough to see easily in any telescope or in well-supported binoculars. It looks just like a star, so you will need a large, detailed finder chart for Ceres to tell which of the tiny points in the area is it.

If you note the surrounding star field, you can easily observe the asteroid's motion against the background stars from one night to the next, or even (with care) from one hour to the next. 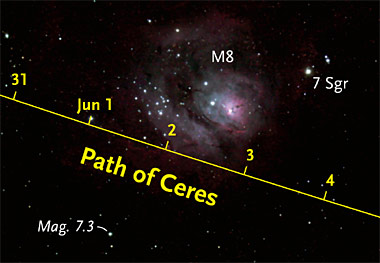 Ceres, magnitude 7.5, is dimly visible in binoculars as it passes south of the Lagoon Nebula in Sagittarius for a few nights in early June 2010. The tick marks are for 0:00 Universal Time (GMT) on the dates indicated. In the times zones in the Americas, this moment falls on the afternoon or evening of the previous date.

In early June Ceres passes just south of the Lagoon Nebula, M8, located above the spout of the Sagittarius Teapot. The Lagoon is easy in binoculars and a joy in a telescope, even under moderately light-polluted skies. At magnitude 7.5 Ceres will be a pinprick in binocs and obvious in a scope. Print out the photo chart at right and put a pencil dot on Ceres's position for the time and date you plan to look.

Ceres reaches opposition on June 18th at magnitude 7.2. Prior to that date, the asteroid is best observed after midnight.

During July Ceres gradually fades, but it also rises earlier each night and becomes ever higher in the evening sky.

It's still 8th magnitude in August, when it's high in good view by the time the sky grows dark.

Make the acquaintance of Ceres, follow it along, and when it becomes famous, you can say that you knew it quite personally back in the day.

My impressio is that not as much is known about Ceres as say Enceladus. The Images I've seen of it are what I'd expect from an outer Neptunian Moon! I'm glad to hear that there is going to be a dedicated satellite mission!

I tried "Ceres Enceladus Triton" on http://www.wolframalpha.com and it came up with an interesting comparison as well as images!

An Outburst of Andromedid Meteors