Serious comet chasers — people who track faint comets with telescopes and binoculars — have been aware of Comet C/2007 W1 (Boattini) for quite a while. It was forecast to become quite bright for a telescopic comet, 6th or perhaps even 5th magnitude, making it visible without optical aid to skilled observers at dark sites.

For a while, Boattini exceeded its brightness predictions by more than a magnitude. Now it has settled back to its predicted behavior. If it bumps up again — and that's a very big if! — it could become fairly prominent low in the east before dawn in July. 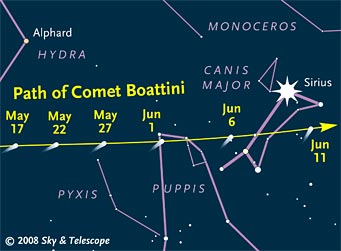 Click above for a more detailed, full-page, printable version of this chart.

Right now (June 6th) the comet is deep in the southern sky and nearing the Sun, so it's visible only from the Southern Hemisphere. There, people have been seeing it without optical aid under ideal conditions. In late May Boattini was also spotted by many binocular observers in the southern tier of the United States.

As of early June the comet is crossing southern Canis Major. If you're at the latitudes of Australia and New Zealand, start looking for it in late twilight, and continue until the Sun's afterglow has completely disappeared. Click here for a detailed, full-page, printable chart showing the comet's path south of Sirius.

The comet passes directly south of the Sun in mid-June, making it invisible to anybody north of Antarctica.

Boattini will emerge from the Sun's glow around the beginning of July as an early-morning object, low in the east, for observers in both the Northern and Southern Hemispheres. What it will look like then is anybody's guess. Most likely, it will be a pleasant though unspectacular little binocular target. There's a small but significant chance that it will become brighter than any comet since Holmes's spectacular outburst late last year.

And there's an even smaller chance that the comet will disintegrate entirely while it's hidden in the Sun's glow and never be seen again. It wouldn't be the first time that's happened to a comet.

Here's a light curve and chart of its future path. Stay tuned to SkyandTelescope.com, and we'll keep you posted on the developments.

How about a chart showing the expected path of the comet as it re-emerges in the pre-dawn sky?

It would be handy for computer tracking if you could also include the comet ephemeris in your articles.
Many thanks for an informative magazine.

Lance, we provided an ephemeris in our AstroAlert for this comet. If you're not already signed up to receive these free alert
messages, you can do that here. — Roger Sinnott

For Lance Arn, the ephemeris can be obtained from http://cfa-www.harvard.edu/iau/Ephemerides/ . They even provide various format to match software and telescope needs.

Yesterday I was on my terrace and suddenly I saw a bright ball travelling in the sky, first it was very dim and then it brightened, then it again became dim and again brightened and finally it was out of my vision. I didnt use any optical aid and I saw it going towards Ursa Minor.

since this may be a satellite, I'd be interested to know your latitude and longitude, a time and duration (speed) estimate, and an approximate track angle relative to the vertical (or to a line between two stars). You can reply to my e-mail 'bg_26934 ;at; glocalnet ;dot; net'

please is it posible to have a printable chart of the path of boatini today, then the one that I can print out goes only till 11 jun
and the other on the japanese site is not printable
and it would be a bit easier if it was 🙂
I live in the north of chile and I saw the comet with binoculars 6 weeks ago
thanks you very much for all the usefull information
rikkie