On the night of Monday, January 21, 2013. Jupiter, the second-brightest planet, appears less than a finger-width from the Moon as seen from North America. 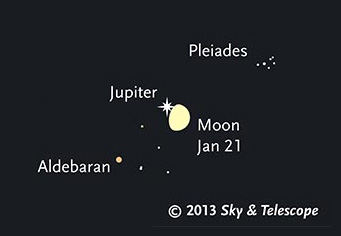 The pair is already very close together at sunset. The time of their closest approach depends on your location; it's around 7 p.m. in the Pacific time zone, 8:30 p.m. Mountain, 10 p.m. Central, and 11:30 p.m. Eastern time. This is an amazing sight to the unaided eye, through binoculars, and in small, wide-field telescopes at magnifications of 40× or lower.

As icing on the cake, the bright orange star Aldebaran shines lower left of Jupiter and the Moon. And binoculars show that the entire event takes place on the outskirts of the Hyades, the closest true star cluster to Earth — with the lovely Pleiades nearby. 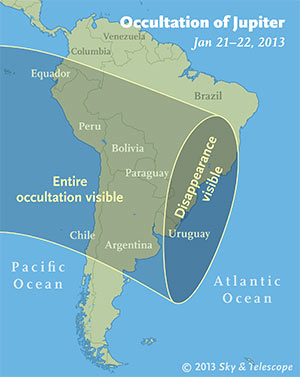 What appears north of the equator as a close conjunction between Jupiter and the Moon becomes a full occultation in South America. In most of the occultation track, Jupiter passes behind the Moon and re-emerges. But within the oval on the eastern end, the Moon sets while Jupiter is still hidden, so only Jupiter's disappearance is visible.

In much of South America, the Moon will actually pass right in front of Jupiter, hiding it from view. To find out when the Moon occults (hides) Jupiter for selected locations in South America, see the International Occultation Timing Association website.

This is an opportunity to attempt an unusual feat: spotting Jupiter in the late afternoon, before the Sun sets. First locate the Moon medium-high in the east; then look a few Moon-widths left or lower left of the Moon for Jupiter. It should be easy to spot with binoculars if the air is clear.

If you miss this conjunction, there will be another fine Jupiter-Moon conjunction on March 17th.

Anyone know if, in North America, we'll be able to see the Earth's moon eclipse one of Jupiter's, even if we don't get to see Jupiter itself go behind the moon?

No, Earth's Moon is sliding south of Jupiter, while the plane of Jupiter' satellites is east-west. So our Moon will miss Jupiter's moons as well as the planet itself.

No doubt one of Jupiter's numerous tiny "mooonlets" will be eclipsed (hopelessly unobservable, of course) since most of them are in orbits which are highly inclined relative to the ecliptic. But Jupiter's planet-size moons, the Galilean satellites, are almost never occulted except when Jupiter itself is occulted because they orbit nearly in the plane of the ecliptic and the Moon also orbits nearly in the plane of the ecliptic. This leads to an interesting bit of geometry that you can observe even without an actual occultation: draw a line through the ends of the Moon's terminator (near enough to the Moon's north and south poles). Now draw a line through the Galilean moons. You will find that these two lines are nearly perpendicular. They always are. And as you watch the Moon move among the stars tomorrow night, you will find that its path is perpendicular to the terminator and thus parallel to the plane of the Galilean moons. So if the Moon occults Jupiter, except in a grazing occultation, it will necessarily occult, one-by-one, the Galilean moons. And if the Moon misses Jupiter, it necessarily misses the moons, too.

Phenomenally, the Galilean satellites orbit in the plane of Jupiter’s equator, which is tilted just a few degrees from the ecliptic. A spinning massive body produces a gravitational low-spot along its equator, which orbiting bodies tend to settle into, Saturn’s rings being a visible demonstration of this effect. Moonlets in highly inclined orbits give themselves away as recent captures. Soon, in geologic terms, they will either settle into equatorial orbits, or crash into a larger moon already in one. Saturn’s axis of rotation is tilted about 27 degrees, so a separate eclipse of Titan should occur very occasionally...visible from somewhere on Earth.

My family and I were treated not only to the close conjunction last night, but the moon and Jupiter were also surrounded by one of the most colorful lunar coronas I have ever seen. I have sent images to you and Sean, but they do not even come close to capturing the surreal beauty of the colored rings framing the conjunction, with the moon showing her maria!!

Hundreds of people in Puerto Madryn, Patagonia, Argentina. witnessed the beautiful site early this morning of Jupiter appearing to "skim" the upper edge of the moon.
The sky as usual in this beautiful town was very clear. The daytime temperatures had been in the 30´s centigrade and many people were out and about until the early hours of this morning.
Because of the brightness of the moon and the closeness of the planet, photographs taken with automatic exposure appeared to show that an occultation had occurred and that the top edge of the moon had gone in front of the planet for a few minutes. With the exposure stopped down so that the moon´s craters could be seen in detail but the planet now only appearing as a dim spot, it seems likely that as it was only a conjunction. But how close!

This is in agreement with your fine occultation map.
Puerto Madryn is situated on the east coast of South America just a few kilometres south of the lower boundary.