For the second time this year, planetary imager Christopher Go in the Philippines has spotted an exciting change on Jupiter. On November 9th, Go found a bright new white spot in the pale zone that normally displays Jupiter's reddish-brown South Equatorial Belt (SEB). Observers worldwide have been watching the area all year in anticipation of this event.

As most planetary observers are aware, the familiar dark SEB has been AWOL for Jupiter's 2010 apparition. This is the SEBs first complete disappearance of the new millennium, but similar events happened 12 times in the 20th century. So far, this year's SEB disappearance has followed the predictions of astronomer Elmer Reese nearly half a century ago (S&T: September 2010, page 50). 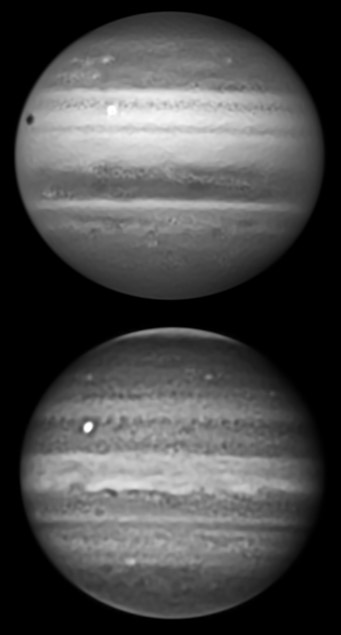 The new white spot in the SEBas imaged by Don Parker of Coral Gables, Florida, on the evening of November 9th through ultraviolet (top) and methane filters.

Having received Go's alert earlier in the day, veteran Jupiter observer Don Parker of Coral Gables, Florida, was ready as dusk arrived in the eastern U.S., when the spot was predicted to be again on the side of Jupiter facing Earth. He tells us that "within moments of focusing my telescope, I knew Go was right. It appears like bright a moon transit across the Jovian disk. But the nearest satellite, Io, had just crossed in front of the planet less than hour ago. Congratulations Chris!"

Jupiter atmosphere expert Amy Simon-Miller of NASA's Goddard Space Flight Center notes, "This is how we would expect to see the SEB return; the disturbance is generated at fairly deep levels and is very energetic, especially in the especially the methane-band, indicating high altitude lofting." The spot is very bright in methane-band images, which diagnose how high (bright) or low (dark) a cloud layer lies in Jupiter's atmosphere. The more clear methane above the visible clouds, the greater the methane-band darkening effect.

The new spot is located at roughly longitude 290° in System II (150° in System III). It should transit next at 5:28 November 11th Universal Time (12:28 a.m. on the morning of the 11th EST; 9:28 p.m. on the evening of the 10th PST). Observers should be on the lookout for changes to it over the next few days. Based on previous occurrences, the spot may become darker than the surrounding region and then spread out along the SEB latitude, and other spots may break out at different points — eventually dredging up dark material to re-form the belt. 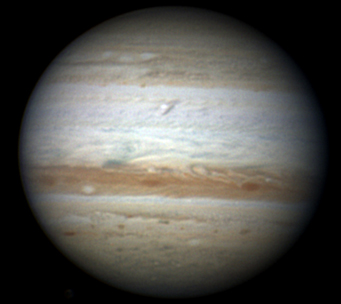 Christopher Go captured this image of Jupiter from his home in the Philippines on November 12 at 11:17 Universal Time.

It seems the outbreak is growing as predicted. Bluish tendrils appear to be expanding from the bright spot, and is being spread East and West by the sheering winds of the SEB zone. Observers are encouraged to keep watching the entire SEB; other spots may form in the days ahead. The current spot transits Jupiter's central meridian about 3 hours, 40 minutes after the Great Red Spot.

Sean:
You said:
"It should transit next at 5:28 November 12th Universal Time"

Articles like this make the Sky and Telescope magazine very exciting. Thanks everyone around the world.

Took some images of Jupiter around 0100UT on November 12th. These avis show the bluish tentrils that are seen in Chris Go's image that was taken at 1117UT the same day. So, this expansion from the white spot was starting as early as 0100UT on the 12th of November. Images were not the best as I had to contend with a jet stream overhead. One processed image can be seen here: http://www.howardastro.org/gallery2/main.php?g2_itemId=7132

Would it be too much to ask that next time you write a piece for others to read that you first edit the piece?
Please know that I do not send this in a mean-spirited way.

I was able to watch until ~08:30 UT on 15 Nov. First glimpsed the spot an hour before - it was dark, and looked like a low-contrast version of Io's shadow. Definite bluish tint. As it approached the meridian I began to see tendrils somewhat like Chris Go's image, but the core continued to appear dark.

For what it's worth, I had the impression that the STB (South Temperate Belt) just south of the spot was a bit darker and more contrasty than usual. Chris Go's image seems to show this as well. The darker region rotated with the planet. If/when other spots erupt I'd be curious to see if they also seem to influence the STB.