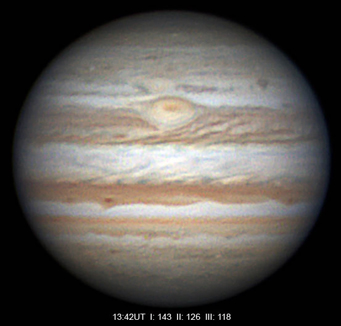 This photo by Christopher Go of Cebu City, Philippines, shows that little remains of the Little Red Spot. Click the image to see an animation of the event as photographed by amateurs around the globe.

As Jupiter reached opposition earlier this week, it put on a spectacular show of cannibalism for anyone viewing with modest telescopes.

Planetary specialists around the world have been watching with bated breath as a cataclysmic encounter between Jupiter's Great Red Spot (GRS), Oval BA (Red, Jr.), and the newly discovered Little Red Spot (LRS) unfolded at the beginning of July. Though encounters such as this are relatively common on the gas giant, this event was greatly anticipated because the LRS was strong enough to dredge up material from deeper within Jupiter's atmosphere, imbuing it with the same reddish color as the GRS and Oval BA.

As the three storms converged on July 1, LRS appeared to be rapidly squeezed between the GRS and Oval BA. Images recorded through methane filters which accentuate upper-atmosphere details showed all three spots as individual features as late as July 7th, leading some to conclude that LRS had survived the encounter. 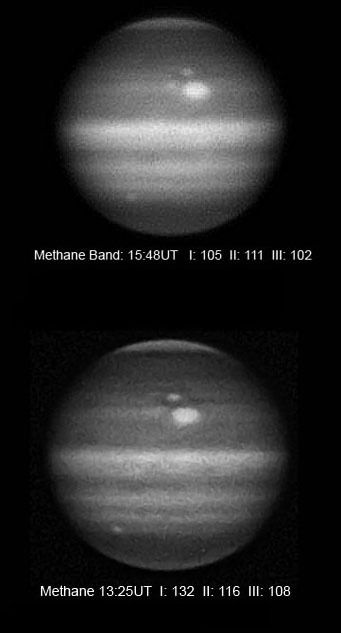 These two images recorded through a filter sensitive to methane shows the remnants of the LRS on July 7 (top), which had disappeared by July 10 (bottom).

However, amateur Christopher Go of Cebu City, Philippines, captured high-resolution pictures on July 10 that appear to put an end to the speculation. His image shows no sign of the LRS, and methane images show only the GRS and Oval BA.

Major observatories including the Hubble Space Telescope booked time to capture the happenings this week. Amy Simon-Miller of NASA's Goddard Space Flight Center says "Little spots typically appear at the GRS' latitude, and eventually get eaten. Usually, they move faster than the GRS and approach it from the east. What's different with this one is that the GRS caught up with it, it got pulled around the south of the GRS, and then up to the east side. We'll have to model the timing and other aspects of the HST data to see what it can tell us."

Events like this were beyond the reach of all but a small handful of amateurs as recently as a decade ago. With the advent of highly sensitive specialized webcams, more and more amateurs are able to contribute valuable data to the study of our neighboring worlds.

It appears the obituary for LRS may have been premature. John Rogers of the British Astronomical Association informs us that recent amateur images show there is still a persistent bright spot where the LRS was expected to emerge after passing between the GRS and Oval BA.

"It's slightly farther north than before, but probably now drifting back toward the GRS," notes Rogers. So the storm may yet be swallowed by the GRS, it has thus far escaped that fate. Stay tuned for further information.

enhanced haze over the vortices shows up as bright spots in chris go's methane band images. the rapid changes may be related to how the haze is connected with the vortices. is the haze an integral part of the vortex, like smoke collecting inside a tent? or is it injected over the oval and left to slowly dissipate, like a puff of smoke expelled upwards by a diesel bus?

amateur images, especially in the methane band, are providing a great record of these exciting and informative changes on jupiter.

Was this event observable? Or was it only possible to see in astrophotos. That would be cool if it is observable