Skywatchers in the Americas get their second total eclipse of the Moon this year on Tuesday morning, August 28th. But as with the first one (back on March 3rd), you may find that the shadowed Moon is intimately involved with bright twilight and your local horizon, depending on where you are. 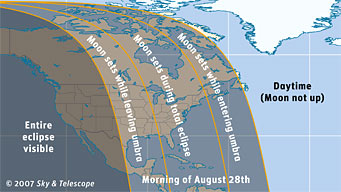 The Moon sets during the eclipse over much of America. Click above for a larger map.

In fact, this eclipse is practically a mirror image of the one in March. It will happen while the Moon is sinking low in the west before or during dawn, instead of rising in the east during or after dusk. And this time, westerners in North America get the good view, while easterners are the ones who’ll miss some or most of the show.

The farther west you are, the better. In the Pacific time zone, you’ll see the Moon’s edge begin slipping into the dark part of Earth’s shadow very early, at 1:51 a.m. PDT. Totality, with the Moon completely in shadow, runs from 2:52 to 4:23 a.m. PDT, and the last partial stage of the eclipse ends at 5:24 a.m. PDT. At that time the Moon is still fairly well up in the southwest and dawn is perhaps only beginning to break.

These events happen an hour later by the clock in each time zone farther east. This means Midwesterners will see the Moon approach the horizon and become lost in the light of dawn while totality is still in progress. And in New England the Moon will be low and the sky quite bright before totality starts. 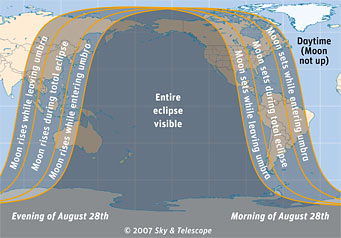 These complications will offer interesting photo opportunities. Remember that the Moon appears very small by normal photographic standards: ½° wide, less than the size of your little fingernail seen at arm’s length. So zoom your camera in as far as you can. See our online article for more photo tips.

If you’re in Hawaii or New Zealand the entire eclipse happens high in a dark sky. In Australia and the Far East, the action happens low in the eastern sky on the evening of August 28th local date, perhaps around sunset or in twilight.

How dull and dark, or how bright and colorful, will the Moon get this time while in Earth’s shadow? The March eclipse was moderately bright. Many people noted that the major craters remained easily visible with binoculars throughout the event, and the lunar maria (its dark “seas”) could be seen with the unaided eye. The colors were fairly subdued, ranging from near-white at the Moon’s brightest edge to rose, brick-red, or perhaps chocolate at the darkest edge. 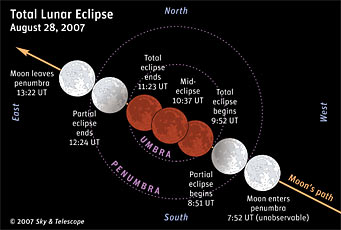 During Augustâ€™s total lunar eclipse, the Moon passes through the southern part of Earthâ€™s umbra, or shadow core. The eclipse is partial while the Moon is moving across the umbraâ€™s edge. Less noticeable will be the first and last stages of the eclipse, when the Moon is only in the penumbra, the shadowâ€™s pale outer fringe. Click above for a larger image.

In August, the Moon will pass closer to the center of our planet’s shadow than it did in March. So this time, we might expect it to be slightly duller and darker around mid-eclipse.

The reason a totally eclipsed Moon isn’t completely black is because Earth’s atmosphere scatters and refracts some reddened sunlight into our planet’s shadow. This is why the shadow’s umbra (its dark central portion) glows with a ruddy hue — anywhere from bright sunset-orange to dark blood-black.

An astronaut on the Moon would see that this illumination is coming from all the sunrises and sunsets ringing the dark Earth with the Sun hidden behind it. The brightness of Earth’s sunrise-sunset ring depends on weather conditions around the world at the time and especially on the amount of dust suspended in the upper atmosphere. 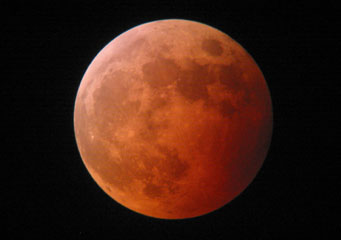 Even during a given eclipse, colors and shades in the umbra can be surprisingly varied. The Moon will pass south of the shadow’s center this time, so around mid-eclipse the south part of the Moon (the lower-left part as seen from North America) should look brightest. Around the beginning of totality, you’ll probably see a bright yellowish or even bluish-white arc just inside the umbra’s edge. Such effects give the eclipsed Moon a very three-dimensional appearance.

The Next Lunar Eclipse

First it was easterners’ turn, now westerners’ — but on February 21, 2008, all of the Americas will get a fine view of a total lunar eclipse high in the dark evening sky. That event will end a series of three in less than a year.