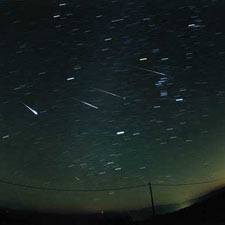 Four brilliant Leonids streaked across the sky while Lorenzo Lovato in Italy was taking this 9-minute time exposure during the 1998 shower. The radiant point in the Sickle of Leo is at far left. Lovato used a 16-mm lens to get this wide-angle view.

Everyone loves a good display of meteors, streaks of light that flash across the sky for an instant before disappearing from view. These "shooting stars" are not stars at all but tiny bits of interplanetary debris (meteoroids), mostly the size of large sand grains or small pebbles, vaporizing in Earth’s atmosphere and superheating the thin air around them. Only rarely do they survive their incandescent plunge and reach the ground intact (as meteorites).

Random, or sporadic, meteors can appear on any night, at an average of six per hour, but at certain times of the year our planet passes through streams of dust and dirt left behind by comets. When this happens we get a meteor shower, during which you might see meteors at a rate of up to one per minute.

The coming year looks to be a good one for meteor-watching because bright moonlight will not interfere with most of the better, more-dependable displays. Here are the dates and estimated hourly rates of some of the major showers in 2007:

Generally, there will be more meteors than usual visible for a few days on either side of a shower's peak. These meteors can appear anywhere in the sky, but you can distinguish them from sporadics because their direction of motion is away from a point in the sky, called the radiant, that's usually in the constellation after which the shower is named.

Meteor showers are best observed in the hours before dawn. You can use our interactive sky chart to see the appearance of the sky during the peak morning of each shower (except the Eta Aquarids which is set to 4:00 a.m.). Click on the "change" button to alter either the date and time or viewing location displayed by the chart. Set the time for 2 a.m., except for the Eta Aquarids, which are best seen around 4 a.m.

January: The Quadrantids
This shower is named after a now-defunct constealltion, Quadrans Muralis, located between the constellations of Boötes and Ursa Major. Although the Quadrantids are usually impressive, this year they peak on the night of a full Moon. Consequently, this year's Quads will be mostly washed out.

April: The Lyrids
What would spring be without an April shower? The Lyrid meteor shower comes to maximum during the predawn hours of the 23rd. The waxing 6-day-old crescent Moon will be a distraction until it sets soon after 2 a.m., when the Lyrid radiant (near the Hercules-Lyra border, a few degrees southwest of Vega) will be about halfway up the eastern sky. Although the meteor count should increase as the radiant rises, expect only modest activity. Even under a relatively dark sky, an attentive observer can expect a dozen or so Lyrids per hour.

May: The Eta Aquarids
This shower consists of debris shed by Halley's Comet. It typically produces a respectable number of meteors (20 or so per hour), but this year's appearance will be compromised by the light of a waning gibbous Moon. You'll see only the brightest meteors, which will radiate from a point near the star Eta Aquarii.

August: The Perseids
This is the most popular meteor display of the year. You’ll have no interference from moonlight when the Perseids come to maximum strength around the time of new Moon on the night of August 12-13. Peak activity is will occur in the predawn hours of the 13th when the radiant is highest and upwards of 60 meteors per hour can be counted by a single observer in ideal sky conditions. Get out that reclining chair and put on the coffee — it’s always worth doing an all-nighter for the Perseids.

October: The Orionids
The Orionid meteor shower peaks on the morning of the 21st. As a 9-day-old Moon sets around 1:15 a.m. EDT, the shower’s radiant point (easily located between Betelgeuse and Mars) will be less than halfway up the eastern sky. Meteor enthusiasts watching under a clear, dark sky will see Orionid meteors streaming from the direction of the two red markers at a rate of perhaps 15 per hour.

Novbember: The Leonids
The Leonid meteor shower peaks during the pre-dawn hours of the 18th. The first-quarter Moon will not be a factor since it sets not long after the shower’s radiant point (near 2nd-magnitude Gamma Leonis) rises. A few hours later, a dozen or more Leonids per hours may be visible under a dark rural sky. This is the typical rate for the Leonids — but a far cry from the many hundreds that could be seen per hour during its extraordinary showing a few years ago.

December: The Geminids
This is one of the most reliable (if chilly) displays of the year. The best time to look is on the night of the 13th and morning of the 14th. Since Gemini rises at nightfall, the shower’s radiant point (near 1.6-magnitude Castor) will be above the horizon until dawn. The 4-day-old waxing crescent Moon will exit the sky by mid-evening. You can expect the Geminids to be best around 2 a.m. local time, when several dozen meteors per hour may be spotted under a clear, very dary sky.