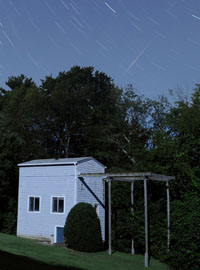 A full Moon flooded the ground and sky with its light on August 13, 2011, wiping out the usually dependable Perseid meteor shower. A solitary streak appears over the observatory of S&T senior editor Dennis di Cicco.

I stepped outside late on Friday into the light of a full Moon, which ruined an otherwise sparklingly clear late-summer evening. But, moonlight be damned, I was determined to see something from the annual Perseid meter shower. Well, give me credit for trying: in 30 minutes, I saw four meek streaks. Whoppee!

To my south by a couple dozen miles, my S&T colleague Dennis di Cicco wasn't having much better luck with his meteor photography. He ran two cameras automatically for the whole night, and, he tells me, they "basically didn’t catch bupkis — just one little stinking meteor just before dawn." A third camera had the most success: three meteors in less than 15 minutes at around 2:30 a.m. EDT on August 13th.

But while we struggled with the Moon's glare on terra firma, astronaut Ron Garan and his Expedition 28 crewmates were enjoying the celestial show from the unique perspective of the International Space Station. Garan has proven pretty facile with a camera, and he managed to snap a remarkable view of a Perseid streaking into the atmosphere.

In his posting on Twitpic, Garan gives a nod to his son Jake, who apparently helped his high-flying dad figure out the best camera settings to use.

As my science-writing colleague Daniel Fischer points out, this isn't the first time that meteors have been captured from orbit. MSX, a U.S. military satellite, snapped a barrage of Leonids during the shower's "storm" in 2000. 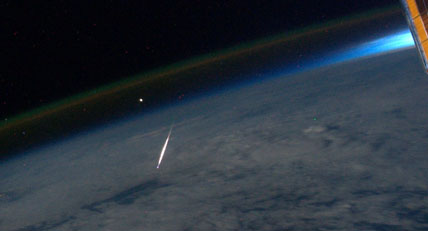 Still, Garan's photo has some interesting details. Due to their fast arrival speed, 38 miles (61 km) per second, Perseid particles meet their demise relatively high in Earth's atmosphere, roughly 60 miles (100 km up). Garan captured a particularly bright one, and you can see that the streak's midsection is brighter than its "head" at lower left.

The cloudy Earth down below, a region of China northwest of Beijing, is illuminated by moonlight. The bright blue swath (the evening terminator) and a sliver of one of the ISS's solar-cell arrays are at extreme upper right. The faint ribbon of light above Earth's limb is airglow — sometimes called nightglow — caused by excited oxygen atoms (green) and sodium atoms (yellow) in the upper atmosphere at roughly the same altitude as the meteor's path.

The bright starlike spot is above the meteor is the star Arcturus in the constellation Boötes, which extends upward from there. In the full-resolution, full-frame version, which is here, you can make out the distinctive star-arc of Corona Borealis well to the upper left of Arcturus.

Is the meteor really a Perseid? That's hard to know for sure, though the orientation does seem to align with Perseus. What I can say is that Garan's nifty image is a keeper!

I was out for about a half hour around 08-09 UTC on three nights from 8/10 to 8/12, each night after the moon had set. Limiting magnitude was about 4.5. I saw about as many sporadics as Perseids. About 10 Perseids total with two that were bright enough to leave luminous streaks. Overall, it seems the Perseids have been rather weak the past 10 years, even in dark, moonless skies.