During early July, Venus and Jupiter are embedded among a wonderful assortment of celestial treasures in the east before dawn.

Sunrise comes early throughout July for us northerners, and the higher your latitude the worse it gets. Here in Boston, for example, today the Sun's first rays breached the horizon at 5:15 a.m. For most of us, that's a cue to just roll over and catch a little more sleep.

But, silly as this might seem, I want to urge you to get up and head outside even earlier this coming week. Do that, and you'll get to enjoy the coolest part of the day, calm surroundings, chirping birds — and a gorgeous sky show over the eastern horizon. 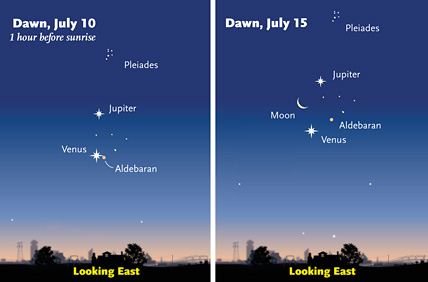 Venus and Jupiter frame the stars of the Hyades in early July. From the 8th to 10th, Venus is within 1° of 1st-magnitude Aldebaran. A slender crescent Moon joins them on the 15th (occulting Jupiter from the Eastern Hemisphere).

The "stars" of this performance are a bright pair of planets. Venus has been dazzling all month at its peak magnitude of –4.7; Jupiter, though less than a tenth as bright (–2.1), is definitely holding its own. These planetary pals were just 5° apart when July opened, but they were lower and buried deeper in dawn's rosy glow.

Now they're starting to climb higher, setting the stage for some dramatic groupings this coming week. And dawn is rapidly arriving later (much more so than you might realize), so you won't have to rise quite as early.

For the past week, Venus has been parked in the midst of the wide-open Hyades cluster. These stars, the mythological sisters of the Pleiades (about 10° higher up), combine with the red giant Aldebaran to create the distinctive V that marks the head of Taurus, the Bull. Between July 8th and 10th, Venus lingers within 1° of Aldebaran, and this pairing amid the cohort of Hyades is definitely worth a look in binoculars. 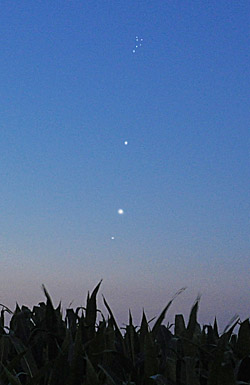 The predawn sky on July 4, 2012, as captured by Gregg Alliss near Marion, Iowa. From the top down are the Pleiades cluster, Jupiter, Venus, and Aldebaran. Click on the image for a larger view and more details.

Several days of celestial sliding later, on the 15th, the celestial assembly is joined by a slender crescent Moon, just 13% sunlit. It's positioned between the two planets, framed by Venus below and Jupiter above, with the V of Taurus not far to the right. That's the day you want to be ready with your camera — or a telescope!

The farther east you are that morning, the closer you'll see Jupiter and the Moon. In fact, those of you in the Eastern Hemisphere can watch Jupiter be overrun by the Moon's sunlit crescent and reemerge from behind the dark lunar limb 45 minutes to an hour later. Get the specifics for your location from IOTA's occultation website.

But wait — there's more! There's another unseen interloper in the midst of all this. The 9th-magnitude asteroid Ceres has started passing through the Hyades as well, and you can spot it with a small telescope by checking the chart in this article about finding Ceres and Vesta. (The latter asteroid is likewise in the area).

So while extra sleep has its virtues, I think you'll agree that a little early rising the next few mornings will pay big skywatching dividends!

Peering Up Into Prairie Skies