It's been 10 months since telescopic observers realized something was amiss on Jupiter. Last February the South Equatorial Belt, one of two dark stripes that sandwich the planet's midsection, turned up missing. Whatever the cause, astronomers knew that a stormy "outbreak" in the months ahead would signal the belt's eventual return.

Sure enough, last month a burst of cloud activity heralded the belt's revival. In the weeks since, amateurs worldwide have been tracking a clutch of bright spots in the area around longitude 290° (System II). Each time the disturbed zone rotates into view (the planet rotates in just 10 hours), it's scrutinized by observers visually and with digital imaging gear. 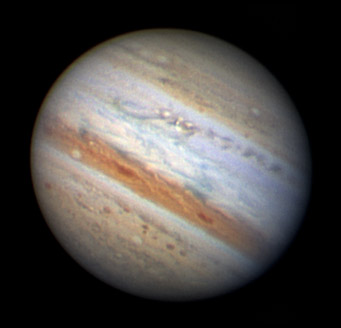 Conditions were good enough on the evening of November 28 for Pennsylvania amateur Wayne Jaeschke to capture the bright spots (near the central meridian of the planet) and wavy dark band in the SEB. South is up.

John Rogers, director of the Jupiter Section for the British Astronomical Society, has been compiling observations from around the globe. He notes that after the first white spot appeared on November 9th, a second spot popped into view three days later and, since then, at least three more have emerged.

According to Sean Walker, S&T's imaging editor, "These spots, which may be upwelling material from deep within the planets atmosphere, have also generated a long, dark wave feature within the SEB spanning more than 100° of longitude. This expansion is expected to continue until it encircles the planet, completing the SEB revival."

"Dark spots are forming and retrograding with respect to the source," Rogers also notes. "We can expect vortices to form soon."

Professional astronomers are joining the Jupiter watch as well — partly because they've been able to use modern instruments to track the evolving chemical and dynamical changes, and partly because careful study can refine the scientific objectives of NASA's forthcoming Juno mission scheduled to be launched next August and begin orbiting the giant planet in mid-2016. Infrared observations made from Hawaii with the Infrared Telescope Facility, Keck Observatory, and Gemini Observatory offer clues to what's going on deeper down in the planet's cloud layers.

Since the King of Planets is still dominating the evening sky, there's no reason why you shouldn't get in on the action. You'll need a sizable scope to resolve the individual spots in the growing disturbance, but a backyard setup of any size is likely enough to let you watch the dark belt's return in general. Of course, we welcome your images of the event — feel free to post them in S&T's online gallery and on our Facebook page.