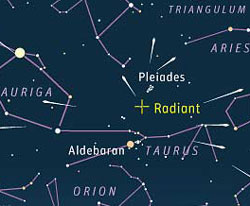 The author’s 2002 plot of meteors seen on the morning of September 14th shows that the September Taurids originate from a radiant between Aldebaran and the Pleiades. As noted in the accompanying text, 2004 provides a good opportunity to confirm the shower’s annual appearance.

A new meteor shower, called the September Taurids, might peak this month on the evening of September 13–14, 2004, which coincides with the new Moon. The exact date and time of maximum activity, however, are uncertain. In other words, by keeping your eye on the sky around the predicted date, you can help refine our knowledge of this little-studied event.

If you haven’t heard of the September Taurids, don’t worry; few have. The radiant, which lies between the Pleiades and Hyades star clusters, was first detected by Robert Lunsford (San Diego, California) on the night of September 10–11, 1996, and was confirmed the following night by Norman McLeod (Miami, Florida) and George W. Gliba (Greenbelt, Maryland). But the meteors were mostly forgotten until September 14, 2001, when there was an apparent outburst of activity (Sky &Telescope: September 2002, page 85 and December 2002, page 16).

Some annual meteor showers, especially old ones like the classical Taurids (visible between mid-October and late November), are broad streams of particles that have become spread out over time. They are so broad that Earth spends a month or more traversing them. The September Taurids may be one such stream, as evidenced in a report by Astronomical Society of South Africa’s Magda Streicher. She first noticed unusual meteor activity radiating from Taurus on the night of August 11–12, 2001, while observing the annual Perseid shower. By the morning of the 13th she had logged 14 Taurids. She also noted that the suspected radiant seemed to drift slightly eastward on successive nights.

If the September Taurid activity in 2001 was part of a minor annual shower and not a random outburst (arising as the Earth encountered a temporary filament of dust particles), then the Earth should have intercepted the stream again in September 2002. And it did. Gliba confirmed the shower’s return on the evening of September 13–14, 2002, recording six meteors between 4h and 7h Universal Time. Their average brightness was magnitude 2.7.

In Hawaii I too confirmed the shower’s return. On the morning of September 14, 2002, I watched for meteors for three hours beginning at 12:22 UT. During the first hour I recorded 13 shower-related meteors. More than half of these were 4th magnitude or fainter. The activity kept its pace for the next half hour before it began to wane. The second hour closed with a total of 11 September Taurids. I saw only four shower-related meteors in the final hour.

Why have the September Taurids eluded detection for so long? If we consider the modest number of meteors visible per hour, and the fact that more than half of them are likely to be 4th magnitude or fainter, any significant light pollution, moonlight, thin cloud, or atmospheric haze would greatly diminish the shower’s visual impact.

The light of a nearly full Moon ruined any chance of seeing much in 2003, so observations made this September will be particularly important. If you do go out, head for the darkest site you can find and be on the alert for swift streaks of dim light.