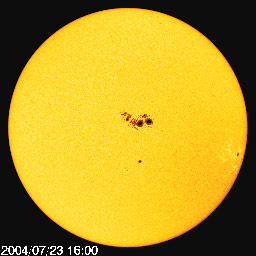 The spotted Sun at noon EDT on Friday 23rd. The big spot group is Active Region 10652, or '652' for short. As the Sun rotates westward this week, the spots will be carried to the right-hand edge of the disk. North is up.

After weeks of having a face free of large blemishes, the Sun now sports a Jupiter-size spot. Designated active region 10652, the sunspot is large enough to be visible without magnification — all you need to see it is a sunny day and a safe solar filter. Of course, a properly filtered telescope makes the view even better.

Sunspots are dark regions on the Sun's photosphere, or visible surface. They form where the solar magnetic field traps ionized gas and allows it to cool. Whereas the photosphere's average temperature is 5,700° Kelvin, in the dark center ("umbra") of a sunspot, where the field is strongest, it's about 2,000°K cooler. If you could view a sunspot by itself, it would appear blazingly bright. But in contrast with its even brighter surroundings, it appears dark. The umbra of a large spot is typically surrounded by a lighter penumbra, where the magnetic field isn't quite as strong.

The Sun turns on its axis roughly once a month, so this large spot will remain on the Earth-facing side of the solar disk until about the end of July. Remember, never look at the Sun without proper eye protection. There are a variety of ways to safely observe the Sun, many of which can be found in the solar observing section of our Web site. If it's cloudy, you can check out the solar disk on the SOHO Web site (click on "Latest Images" followed by the "Near real time images" hotlink).