The annual Leonid meteors arrive this weekend in dark skies.

Tonight the annual Leonid meteor shower peaks. The Leonids aren’t usually a spectacular show — although they did have an impressive spurt several years ago — but their predicted peak is well-timed this year in the wee hours of Saturday, so students and Monday-Friday workers don’t have to worry about being bleary-eyed the next day. 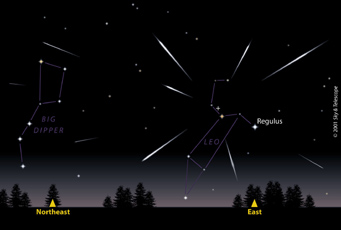 The cometary crumbs that create Leonid meteors are traveling together through space, along the orbit of Comet Tempel-Tuttle. So even though they can appear anywhere in the sky, they all seem to emanate from a spot in the constellation Leo. But in mid-November this constellation does not rise above the horizon until nearly midnight (this view is for 1 a.m. local time), so large numbers of meteors will not be seen until Leo rises.

To spot some Leonids, go out between midnight and dawn and find yourself a wide-open view of a clear, dark sky. Find the eastern horizon and look up until you find a hook-shaped pattern of stars. That’s the Sickle of Leo, the Lion (technically the curve is the lion’s head). The meteors will appear anywhere in the sky at all. But trace their line of flight far enough backward across the sky, and the line will cross the Sickle.

Under a dark sky, you might a dozen Leonids per hour. (Not a lot higher than the per-hour average for the random sporadic meteors that happen all the time.)

The Leonids are weakly active for several weeks in November, but the maximum falls on the morning of Saturday, November 17th. There’s also speculation that a second peak with about the same number of meteors per hour might happen early Tuesday morning November 20th. The Tuesday peak is due to debris shed by Comet 55P/Tempel-Tuttle as it passed through the inner solar system in the year 1400. You can read more at the International Meteor Organization’s website.

The waxing crescent Moon won’t be a problem for meteor watchers, setting before the Leonids’ radiant point in Leo rises high enough for the shower to become active. And if you’re in the Northeast, like we are, the weather looks to be in a holding pattern — a cold holding pattern, but hey it's November.

There’s lots to learn about meteors in our Meteors section, from the basics of what meteors are to tips on observing them, both for beginning and advanced observers.

And don’t miss next month’s Geminid shower, which should have an hourly rate nearly 10 times higher than the Leonids.

several years ago I counted over 150 meteors in little more than an hour. I'll be out there this Saturday morning.

several years ago I counted over 150 meteors in little more than an hour. I'll be out there this Saturday morning.

Nice shower this year, between 3-4am saw several coming in from the west with short tails, not very bright, after 4am saw 3 in rapid sucession with long glowing trails, then the clouds moved in - even saw one through the thin edge of the cloud layer - best one was headed south past Leo's head between Leo and Cancer - now for hot tea with my wife who got ME up at 3am to watch the shower - she has caught the bug some from her hustband over the past 18 years!

Just a few years ago, my son and I counted over 450 in one hour. We couldn't keep up with them all. Many, many Bolides. Some of the flashes were bright enough to create a shadow. A site I will probably never see again in this lifetime.