If you can find a spot with a completely unobstructed western horizon, you can watch an extraordinary sky show in August and September 2008. Every evening just after sunset, four planets and two first-magnitude stars combine to form fascinating and ever-changing patterns. 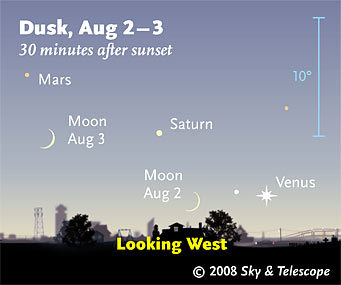 If you live in the Southern Hemisphere, you can watch the whole show with your unaided eyes, but you will need binoculars to appreciate it properly from mid-northern latitudes. Go outside ten minutes after sunset and scan the western horizon until you find brilliant Venus, shining at magnitude -3.8. Then look for the fainter planets.

Mercury (magnitude -0.5 to 0.5) joins Venus from mid-August through mid-September. Saturn (magnitude 0.8) is low at the beginning of August and disappears a couple of weeks later. Mars, the faintest by far at magnitude 1.7, starts August high to the left of Venus and ends September to Venus's lower right. Look also for Regulus and Spica, which are brighter than Mars but fainter than Saturn. And for the first three evenings of each month, a thin crescent Moon joins the show.

Click here to view a one-megabyte movie of the four-planet dance. After watching the general progression, step forward and back to see the configuration on any particular evening. You may need to install QuickTime to watch the film if you haven't already done so.