On the evening of Sunday, March 17th, stargazers all across the Americas will be able to watch the Moon pass spectacularly close to Jupiter, the third brightest object in the night sky after the Moon and Venus. 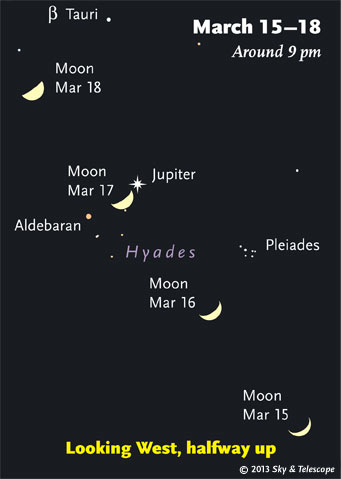 Jupiter will remain quite close to the Moon all evening — just the width of one or two fingers held at arm's length. But their closest approach will come around 11 p.m. EDT or 8 p.m. PDT. At that point, the cusps of the crescent Moon will point directly toward Jupiter on one side and the bright star Aldebaran on the other. Normally, Aldebaran appears extremely bright, but it pales by comparison with its dazzling neighbors.

Binoculars show the scene beautifully, including the stars of the Hyades cluster between Aldebaran and the Moon as well as many craters and mountains on the Moon itself. And if you can hold them steady enough, they will also show Jupiter's outer moons Ganymede and Callisto flanking it on either side. But binoculars are unlikely to show the inner moons Io and Europa, which will either be very close to Jupiter or hidden behind it.

If you have a telescope, you might want to watch Europa disappear behind Jupiter around 10:48 p.m. EDT (7:48 PDT) and Io at 12:14 a.m. EDT (9:14 p.m. PDT). Our JupiterMoons app for mobile Apple devices can guide you to future satellite crossings and eclipses.