What is the Black-Drop Effect?

The black-drop effect observed during the transit of Venus hindered and puzzled astronomers for centuries before modern observations solved the mystery. 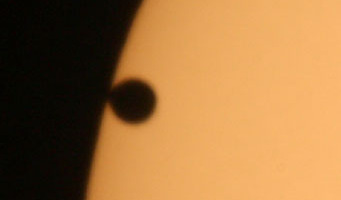 When Venus transits the Sun on June 5th/6th, many observers will be watching for the black-drop effect, the teardrop shape that Venus assumes as it makes contact with the Sun’s edge. Once a nuisance, now an observer’s treat, the black-drop effect is a slight elongation of Venus’s black disk as the disk touches the inner edge of the Sun at second contact (upon beginning the transit) or third contact (at the transit’s end).

To earlier centuries, the black-drop effect marred what should have been a precise measurement of the scale of the solar system. Under Edmund Halley’s charge, astronomers of the 17th and 18th centuries traveled the globe in often dangerous circumstances to measure the exact times that Venus’s black disk touched the inside edge of the Sun, both at the beginning and end of the transit. Their measurements, combined with some simple geometry, should have yielded the distance to the Sun. But the black-drop effect got in the way. What should have been a precise time measurement became smeared out enough that the Earth-Sun distance was known no better than before.

In the 19th century, the distance to the Sun was measured more accurately by other means, answering one science question while leaving another wide open. What caused the black-drop effect? The question was surprisingly controversial, sparking a plethora of theories after the transit of 1761. Suggestions through the centuries included blurring due to Venus’s atmosphere, spherical aberration of the eyepiece or lens, or even polyopia, a vision defect that causes one to perceive several images of one object.

Some astronomers still debate the cause, but one commonly accepted theory holds that multiple factors combine to create a black drop. The primary cause, for practical purposes, is the blurriness of the image. The telescope's point spread function, a technical definition for how much a telescope blurs an image, as well as the additional blurring caused by turbulence within Earth’s atmosphere, combine to create and enhance the black-drop effect. In fact, good seeing combined with modern optics can combine to almost eliminate the black-drop effect. If you want to see the black drop, this might be one case where bad optics can work in your favor!

So, what happens when you use a good-quality, space-based telescope? Will the black-drop effect disappear? Not entirely, it turns out — another factor is also at play.

A true test of the black-drop effect came in 1999, when Mercury transited the Sun. Astronomers Jay M. Pasachoff and Glenn Schneider (Williams College) were ready for this event with planned observations using NASA’s Transition Region and Coronal Explorer (TRACE). The advantage of observing Mercury from a satellite in orbit around Earth was that neither the Earth’s atmosphere nor that of the transiting planet played a role. Yet the black drop was still observed, eliminating blurry as the only cause. Pasachoff and Schneider had to take into account limb darkening, the darkening of the Sun inner its edge. The Sun is a ball of gas, so its “edge” is soft, progressively darkening into blackness as you look through less and less gas. The effect of limb darkening was confirmed during TRACE observations of Venus’s 2004 transit.

Other causes of the black drop may continue to be debated, but this time around, the focus will be less on the black-drop and more on the brighter venture of observing sunlight as it refracts through Venus’s atmosphere.

Australian watchmaker F. Allerding recorded the â€œblack-dropâ€ effect as the silhouette of Venus prepared to exit the Sun's disk on December 9, 1874. He observed through a 3½-inch refractor. Adapted from Observations of the Transit of Venus Made in New South Wales by Henry C. Russell (Sydney, 1892). (Click on the image for a high-res version.)