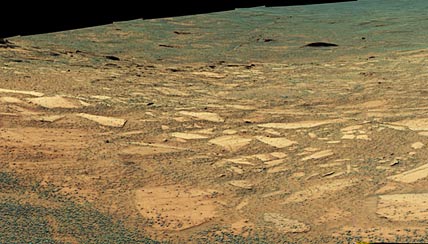 The road ahead. Before venturing over the lip of Endurance Crater, Opportunity took this view of the 'blueberry'-strewn slope leading down in.

After spending a month driving around the rim of the 130-meter-wide Endurance Crater, NASA’s Opportunity rover rolled cautiously down its slope on Wednesday. 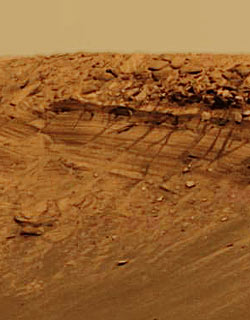 Clues to Mars's past are locked up in the layered rocks of 'Burns Cliff,' which, because of the steep, loose slope below it, may remain out of reach.

Mission scientists are eager to examine the interior of Endurance because deeper, older layers of rock are exposed inside. "As we approached it, it became more and more exciting," says mission scientist Ray Arvidson (Washington University in St. Louis). "There's a section of this relatively bright evaporitic rock and then it's sitting on an older section of what appears to be basaltic sandstone that's also crossbedded." Crossbedding is the interweaving of layers characteristic of sedimentary rocks formed either beneath flowing water or in the presence of winds.

The scale of the crossbedding inside Endurance is more characteristic of sand dunes formed through wind action, Arvidson says, but he is not ruling out water. "It could be that these are very large ripples in an oceanic environment," he says. 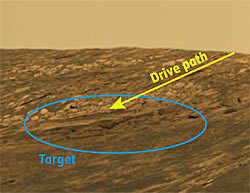 Mission planners have decided that the potential science benefits of driving down this slope to examine Karatepe and other features outweigh the risk that Opportunity might never get back out.

The rover's target inside Endurance is an outcrop named Karatepe just six or seven meters inside the crater rim, where the older, basaltic sandstone appears to be poking through the surface layer of younger sedimentary rock. Mission planners chose this location because the path leading from the rim has a shallow, 20° slope and is composed mostly of flat rock, which provides better traction than sand.

Opportunity reached the rim of Endurance in late April. Mission scientists have been imaging the crater since then and trying to find a safe path to the interior. They also investigated rocks near the rim, including one dubbed Pyrrho that has a rippled surface possibly indicating past water interactions.
Managers agonized for weeks over the decision to send Opportunity into Endurance, because it might never get back out. To explore the risks, engineers built a test bed of rock and sand that can be tilted at different angles and drove a test rover around on its surface. If Opportunity's path to Karatepe turns out to be steeper or sandier than expected, the rover may not get enough traction to climb out.

Mission planners are crossing their fingers, because there are tantalizing targets outside the crater they would dearly like to investigate. They especially want to drive the rover south to inspect the vast "etch terrain" where the hematite-rich surface has been carved away, exposing some other, brighter material. The mission's engineers, for their part, are eager to visit Opportunity's discarded heat shield, which lies about 450 meters from its landing site, to see how the descent through the thin Martian atmosphere affected it.