NASA scientists are celebrating the 10th anniversary of a robotic rover's touchdown on Mars's Meridiani Planum. Opportunity is still healthy, still rolling, and returning valuable insights about the Red Planet.

This weekend, NASA managers and planetary scientists everywhere are celebrating a remarkable, almost unthinkable achievement: the Opportunity rover has been operating on Mars since dropped to the surface on January 25, 2004. These numbers bear witness to the little rover's accomplishments:

These days the rover is far from its original landing site on Meridiani Planum. It's perched on "Solander Point" at the rim of Endeavour, a relatively fresh crater 14 miles (23 km) across, which has been "home" for the past 2½ years. The walls of Enveavour's rim have exposed outcrops that orbital observations suggest might contain small amounts of clay minerals. 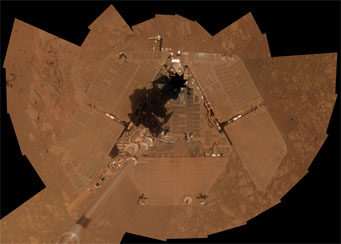 NASA's Opportunity rover used its PanCam to record a series of images for this self-portrait during the first week of January 2014, about three weeks before completing a decade of work on Mars. The spacecraft's solar-cell "wings" are covered with fine dust that reduces their ability to generate electricity to power the rover's systems.

The rover isn't moving much these days — it's winter there now, and the weak sunlight falling on its solar-cell arrays isn't providing enough electricity. A recent "selfie" shows that Opportunity is hardly the spiffy, ready-to-roll robot that arrived back in 2004. It's covered from mast to wheels in the ruddy, superfine dust that coats everything on the Martian surface. Mission engineers' most recent update notes that the dust has reduced the solar cells' output to only 60% of what they'd be if completely clean.

But that hasn't stopped Opportunity from continuing its scientific mission. The rover is studying a curious rock, dubbed "Pinnacle Island," that apparently got churned to the surface by one of the wheels during a recent traverse. Indeed, Opportunity's findings while at Endeavour are highlighted in this week's edition of Science, which has recently brimmed with results from Opportunity's much-bigger sibling, Curiosity. 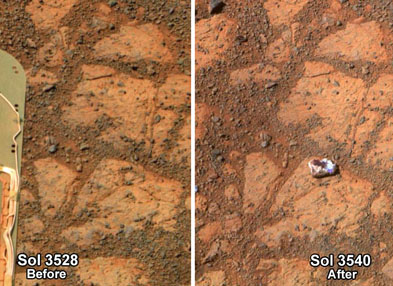 Before-and-after images of the same patch of ground in front of NASA's Mars Exploration Rover Opportunity, taken on December 26, 2013, and January 8, 2014. The rover had completed a short drive just before taking the second image, and one of its wheels likely knocked the bright rock — dubbed "Pinnacle Island" — to this position. The rock is about the size of a doughnut.

"These rocks are older than any we examined earlier in the mission," says Ray Arvidson (Washington University), lead author for the report about Endeavour, "and they reveal more favorable conditions for microbial life than any evidence previously examined by investigations with Opportunity." Arvidson's remarks appear in a JPL press release celebrating the rover's accomplishments.

Members of the Mars Exploration Rover team (as the mission is formally known) have assembled some great highlights from the explorations of both Opportunity and its twin, Spirit, over the past 10 years.

Sometimes the light's all shinin' on me;
Other times I can barely see.
Lately it occurs to me
What a long, strange trip it's been.

I hope future solar-powered Martian landers will carry a dust broom at the end of a robotic arm.

... Opportunity has a run-in with another dust devil, those always end up cleaning the solar panels!

Opportunity is the Apollo 11 of robotic planetary exploration. If (very big if) man ever sets foot on Mars, the recovery of Opportunity ought to be one of the mission objectives. This intrepid little rover deserves a shrine next to the Saturn V kept at the Kennedy Space Center.

PS. At the present, lamentable, stage of space exploration, robots can go where man cannot but can never replace man.

Kelly,
I attended NEAF shortly after either Spirit or Opportunity landed.
I ran into a NASA scientist there. During our conversation, he
confessed that NASA actually expected a lifetime of six months for
the rovers; 90 days was incase something went wrong.

How about coating all parts that should stay dust-free by these fancy new dust-repellent Lotus-effect nano particles?