Scientists using an instrument aboard the International Space Station have measured a signal that might come from dark matter — or might not. 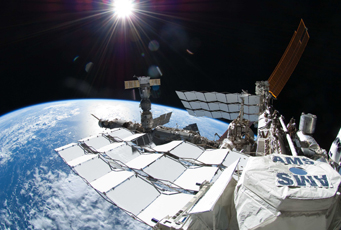 The AMS began detecting cosmic ray particles whizzing past the International Space Station on May 19, 2011.

Physicists announced today the detection of a possible dark matter signal using the Alpha Magnetic Spectrometer (AMS) aboard the International Space Station. The signal comes in the form of too many positrons, the antimatter equivalent of electrons. Previous experiments have detected the same positron excess, but the AMS provides the first opportunity to collect enough data to determine whether the excess really comes from dark matter or from something more prosaic.

Launched in 2011 as part of the Endeavor Space Shuttle’s final flight, the AMS has been taking ultra-precise measurements of the high-energy particles and antiparticles known as cosmic rays that zoom past Earth in a continuous flood.

Antiparticles created in the Big Bang have long since annihilated by reacting with regular matter particles, so those caught in the AMS detector are created by nearby sources. Natural particle accelerators, such as supernovae, pulsars, and black holes, create most of the antimatter, but a small fraction might come from interactions between dark matter particles.

In just 18 months, the AMS has detected a total of 25 billion particles with energies between 0.5 billion and 350 billion electron volts (eV), 400,000 of them positrons. Though models suggest the positron fraction should decrease at energies greater than 1 billion eV, AMS data show that the fraction increases instead. The extremely precise result agrees well with previous observations from the Payload for Antimatter-Matter Exploration and Light-nuclei Astrophysics (PAMELA) satellite and the Fermi Gamma-ray Space Telescope. 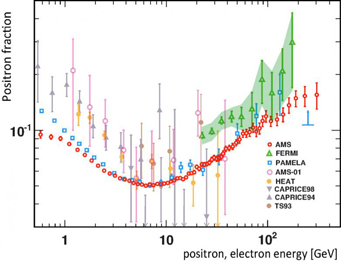 Positrons make up about 5% of the electron-positron population at low energies, a fraction that surprisingly rises at higher energies. AMS data (red circles) are consistent with results from PAMELA (blue squares) and the Fermi Gamma-ray Space Telescope (green triangles and shaded region). AMS's precise results will eventually extend to higher energies, enabling physicists to determine the source of the positron excess.

“The AMS result in this sense is not new, just a much better measurement,” says David Thompson (NASA), Fermi’s deputy project scientist. “What is new is the wonderful precision of the AMS result, and the hint that the fraction is reaching a peak or plateau at the highest energies.”

AMS’s data could provide crucial insight into one of the greatest mysteries of our time. Dark matter makes up roughly 84% of the universe’s matter, yet it doesn’t emit or absorb light, making it all but impossible to detect directly. Yet dark matter reveals its presence indirectly in many ways, such as by bending starlight from distant galaxies. Moreover, cosmological simulations require the presence of dark matter to reproduce the weblike structure of the observed universe.

Indirect evidence shows that dark matter isn’t made of normal particles, such as the protons, neutrons, and electrons that make up you and the chair you’re sitting on. Instead dark matter particles have to be exotic. One leading theory called supersymmetry (often abbreviated to SUSY) suggests that each particle in the so-called Standard Model has a heavier superpartner. The electron is partnered with the selectron, the neutrino with the neutralino, and so on. These weakly interacting massive particles (WIMPs) would make the perfect dark matter candidate — if only experiments could find them.

Ground-based efforts have tried, and failed, to find conclusive evidence for WIMPs through direct detection. (But see some disputed hints of dark matter detection in this table summarizing ground-based dark matter experiments.)

The AMS, as well as previous experiments such as Fermi and PAMELA, take a more indirect approach by looking for the byproducts of dark matter collisions. Since dark matter particles could be their own antiparticles, direct collisions would annihilate the dark matter, leaving behind showers of unstable subatomic particles, as well as gamma-ray photons. The particles would decay further into more stable end products, such as positrons.

If dark matter is uniformly distributed throughout our galaxy, as simulations suggest, then the positron excess seen by the AMS should look the same everywhere, and it shouldn’t vary with time. That’s exactly what the AMS finds.

But the evidence isn’t conclusive yet. “Does this mean it is dark matter? Not exactly. That is one possible interpretation,” Thompson explains. “What seems clear is that something not far from Earth in the Milky Way is producing positrons.”

As the paper’s authors also note, another possible explanation is pulsars. These spinning stellar corpses exhibit intense magnetic fields; gamma-rays near their magnetic poles could create the antimatter the AMS observes.

We’ll know if the signal really comes from dark matter if the signal suddenly drops off at higher energies, says AMS spokesperson and Nobel Laureate Samuel Ting (MIT). Supersymmetry theories predict such a drop-off, but theories of pulsar particle acceleration don’t. The data published today extend to 350 billion eV — above that range, the events become too rare to bother counting. Yet. Over time the rare events with energies up to 1,000 billion eV will pile up. Ting intends for the AMS to be a 20-year experiment, so if the drop-off is there, AMS will see it.

Another possible explanation for the positron excess is that the Galaxy's dark matter halo is composed of stellar-mass primordial black holes. Kerr-Newman black holes would be prodigious sources of cosmic ray nuclei and particles, including positrons.

This type of astrophysical "accelerator" can also generate the significant (and somewhat difficult to explain) quantities of iron nuclei found in cosmic rays.

“...the positron excess...should look the same everywhere, and it shouldn’t vary with time.” Since galactic magnetic fields scramble the trajectories of positrons, the new data narrows down the possible sources to those that can produce them.