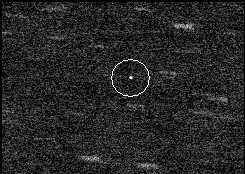 Taken at 20:32 Universal Time on October 6th, this is one of the last images obtained of 2008 TC3 before it was due to hit Earth's atmosphere. Giovanni Sosterno, V. Gonano, Ernesto Guido, and P. Camilleri tracked their 0.45-meter (18-inch) reflector on the asteroid, so it appears as a point while background stars are trailed. Here, the tiny asteroid is less than half the Earth-Moon distance away.

A very tiny asteroid, not much more than 10 feet across, will enter Earth's atmosphere over Sudan in Africa tonight, October 6-7, 2008, near 2:46 a.m. Greenwich Mean Time. Most likely it will burn up before hitting the ground, but it could produce a spectacular fireball, or bolide, in the night sky equivalent to the explosion of about a kiloton of TNT.

These are the assessments of astronomers Andrea Milani of
NEODyS in Italy and Steve Chesley (Jet Propulsion Laboratory). They are concerned that eyewitnesses might misinterpret the event as some type of hostile military action. Says Milani, "The earlier the public worldwide is aware that this is a natural phenomenon, which involves no risk, the better."

The first observatory to capture images of 2008 TC3 (as it's now designated) were Richard Kowalski and colleagues of Mount Lemmon Observatory in Arizona, about 12 hours ago. Confirming measurements were quickly secured by amateur astronomer James McGaha at Sabino Canyon Observatory near Tucson, and then by Gordon Garrad and others at Australia's Siding Spring Observatory and also Christopher Jacques and E. Pimentel using the Global Rent-a-Scope site in Moorook, near Melbourne.

A team of advanced Italian amateurs led by Giovanni Sosterno captured the above image of the object on its way in. You can also view their animation, which is a 1.5-MB file running under Windows Media Player.

First to point out that the incoming object was heading right for a collision with Earth's atmosphere was Bill Gray of Project Pluto, in a post earlier today to the Minor Planet Mailing List. Canadian amateur Andrew Lowe has independently calculated the object's point of entry to be over Sudan.

The object's entry might be visible as far north as the Mediterranean and the Middle East — but certainly not from North America. For those within a few thousand miles, the explosion could appear almost anywhere in the sky, depending on your geographic location. The time of 2:46 a.m. GMT, however, should be accurate to within a few minutes. My advice to would-be observers: Turn and look in the direction toward Sudan from wherever you are standing.

As further details become known, be sure to look at the online version of this AstroAlert at SkyandTelescope.com/AstroAlert for possible updates.