An astronomy program at this summer’s massive National Scout Jamboree gave thousands of Boy Scouts a taste for sky-gazing..

Under the dark skies of Summit Bechtel Reserve in southern West Virginia, thousands of Boy Scouts traded patches or bunked down after a day of exhausting high adventure, while others made their way to a bank of telescopes clustered in the heart of the campgrounds. 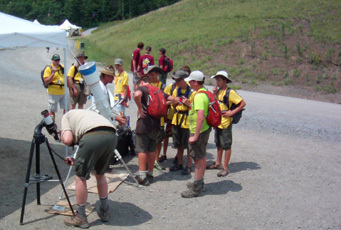 Counselors introduced attendees at this summer's National Scout Jamboree to the sky through solar and night observing.

There, with telescopes trained on Saturn, the Moon, and various deep sky wonders, accompanied by a portable classroom full of high-tech devices, a team of trained Scout leaders and volunteers introduced attendees to the secrets of the night sky.

Every four years, the National Scout Jamboree gathers more than 40,000 Scouts, Venturers, leaders, volunteers, and visitors from across America and the world for 10 days of Scouting celebration. The Jamboree used to be held at Fort A. P. Hill in Virginia, where the presence of an active military installation limited astronomical activities. But this year’s event moved to a new permanent location bordering the New River Gorge National River, which includes more than 70,000 acres of managed wilderness. For the first time in decades, Jamboree attendees had the opportunity to witness the night sky through a telescope.

“The new site for the Jamboree — the Summit Bechtel Reserve — has some of the darkest skies on the East Coast,” said Ed Murphy, Scout leader and astronomy professor at the University of Virginia. “Since many of the Scouts are from urban areas, I wanted them to be able to see the sky under dark conditions.”

“Based on the number of kids coming back over and over, they were very intrigued,” said Chris Klein, a volunteer Arkansas Scout leader and brand manager for Explore Scientific, which stocked the astronomy base camp with a range of telescopes, microscopes, binoculars and other teaching tools. “Most of them had never looked through a telescope. They didn’t realize just how many craters and oceans there are to observe on the moon. Seeing them have that experience of looking through a scope for the first time was awesome.” 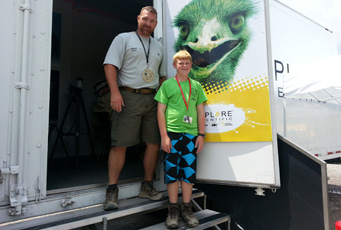 Connor Deluga celebrates with Chris Klein (Explore Scientific) after winning his Astronomy Merit Badge, the first of all Jamboree attendees to do so.

Ohio Scout leader and Jamboree volunteer Ray Deluga and his son Connor were walking through the campground one night when they stopped by the bank of telescopes on a whim. When they stepped up to view Saturn, they were hooked.

“It wasn’t what I was expecting,” Connor Deluga said. “It appeared more 3D and popped out.”

Even though the soft-spoken Ohio Scout had arrived at the Jamboree with no intention of working on his Astronomy Merit Badge, the experience of seeing Saturn inspired Connor Deluga to become the first to complete the badge from start to finish while at the event.

One of the original 57 merit badges issued by the Boy Scouts of America in 1911, the Astronomy Merit Badge evolved over the decades, giving new dimension to the iconic experience of camping under the stars. Scouts have to amp up their stargazing to earn the badge: they plot prime times to observe different planets, track the movement of constellations throughout the year, and identify landmarks on the Moon. They also went beyond standard optics, learning how astronomers use radio waves and other wavelengths to analyze the sky.

The Jamboree counselors combined high-end equipment, comprehensive presentations, and in-the-field experiences to meet a lengthy list of badge requirements while fomenting excitement for astronomy. Each day, the team drew in hundreds of viewers with solar observing sessions. Once there, Scouts and others could step into the portable classroom where counselors used a 42" television screen, Stellarium software and a host of telescopes and binoculars to identify constellations, demonstrate how optics work and expound on topics like why stars come in an array of colors.

And on nights when dark skies reigned, the counselors set aside the high-tech software as Murphy gave a tour of the constellations. “He told stories about the constellations, how they got their names,” Ray Deluga explains. “It helped you remember them. It gave them a meaning.”

Over the course of the Jamboree, the astronomy program encouraged thousands of Scouts to look up and see what the skies can reveal.

“Not only did Connor learn about the stars but he had fun doing it,” says Ray Deluga. “I think he was a little shocked to find . . . he had completed all the requirements for the merit badge. I think he actually forgot about the merit badge factor and was there to learn.”

Patricia Smith recently joined the team at Explore Scientific as a copywriter after years of working in the daily newspaper industry. She is a graduate of the University of Missouri School of Journalism. 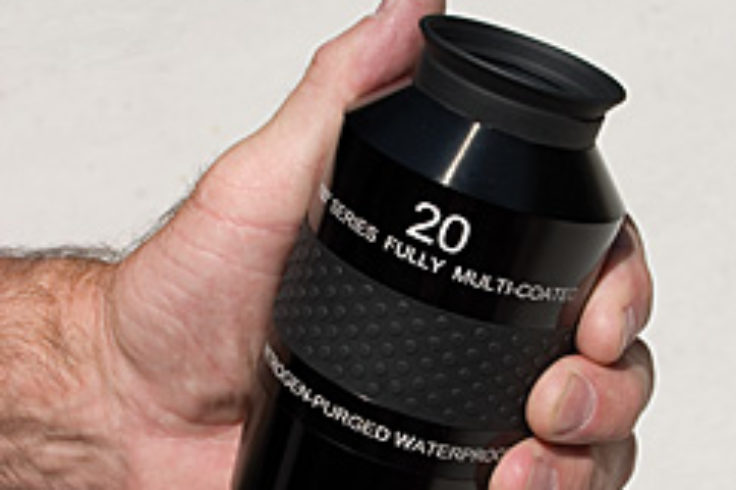 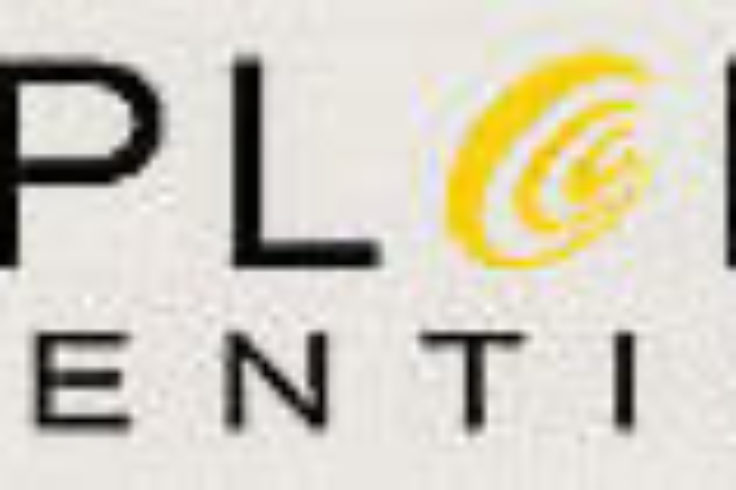