Sky & Telescope's February 2012 issue is now available to digital subscribers. Some print subscribers have already received it, and it's officially on-sale at newsstands starting January 3rd. 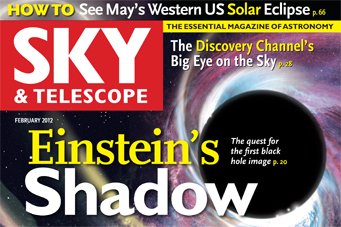 My favorite article this month is "Einstein’s Shadow" — but I’m biased: I wrote it. It's the story of the Event Horizon Telescope project that seeks to image the dark silhouette of a supermassive black hole. I’ve loved black holes for nearly as long as I’ve loved astronomy; in fact, people often tease me about my passion for these hairless beasts. We describe them as “monsters” and “behemoths.” Frankly, I think they’re cute. Even though they’d spaghettify me and can span the size of the Solar System. 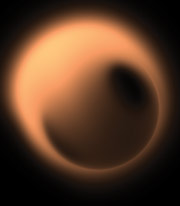 The article arose from work I did for my master’s thesis at MIT. My thesis followed the history of how black holes went from being theoretical quirks to established scientific objects, all in the course of about three decades. But the story took a turn when I learned about the EHT. The EHT isn’t one scope but a network of antennas spread across the globe, stretched from Hawaii to Europe west-east and Greenland to the South Pole north-south. By combining simultaneous observations from different antennas, astronomers can create a planet-sized virtual dish and narrow in on our galaxy’s central black hole, looking to see if material near the event horizon behaves as Einstein’s theory of gravity says it should. There’s no guarantee, you see, so deep in warped spacetime. Such an image, the first direct sighting ever of these singular mysteries, will change forever our understanding of black holes.

Short but sweet, Gary Seronik's Binocular Highlight gives a call-out to one of my favorite objects: M42, the nebula tucked inside Orion's sword. The Orion Nebula is among those fun sights you can use to draw people who haven't yet been bitten by the astronomy bug ("What do you mean, that star isn't a star???"). M42 is visible from a suburban rooftop — ahem I mean, you can probably see it from a dark backyard.

May's annular solar eclipse has me excited because it passes right over my hometown in California. Fred Espenak and Jay Anderson's feature will tell you everything you need to know about when and where to be and what the weather might be like (prediction: it'll probably be cloudy in my hometown). Here online you'll also find a guide to safely observing the Sun and tips for observing the Sun by projection. There's also a list of how-to eclipse observing articles.

This month you can also catch the four brightest planets, a dozen planetary nebulae, and the approach of the first discovered near-Earth asteroid. To find out more, read our online Table of Contents.