Astronomers have measured the motions of a tight pair of supermassive black holes, separated by just 24 light-years in a nearby galaxy.

Galaxies crash together all the time, cosmologically speaking. We see these far-off collisions in the night sky, and we can even calculate our own galaxy’s fate in a massive mash-up with the neighboring Andromeda Galaxy.

The effect of galactic collisions on stars is fantastic, as the galaxies’ gravitational interactions send their stellar members into streams and swirls. But the effect on the supermassive black holes that lurk in the center of most large galaxies is still more awesome, as multiple forces bring the two behemoths closer together until they ultimately coalesce.

Yet, even though black holes are a dime a dozen and galactic collisions commonplace, supermassive black hole pairs have been surprisingly difficult to find. Despite measurements of thousands of galaxies, astronomers have found exactly one close pair of supermassive black holes, separated by only 24 light-years (less than a Kessel Run), at the center of a galaxy dubbed 0402+379.

Now, graduate student Karishma Bansal (University of New Mexico) and colleagues have measured the motions of this pair using radio observations that span 12 years. The results are published in the July 1st Astrophysical Journal.

The images show two bright spots of radio emission from the black holes' jets. Magnetic fields wrap around these narrow streams of plasma as they shoot away from the black hole poles, carrying away a small amount of material that would otherwise have entered the maw. The radio emission that we see comes from plasma electrons interacting with the magnetic field. Bansal and colleagues measured the radio spots' motion across the sky over the years to figure out how fast the black holes were moving.

The team observed these two black holes moving relative to each other at 4 million mph, or 0.5% the speed of light. They’ll take some 30,000 years to complete a single orbit and, the authors suggest, millions of years to merge.

It might seem obvious that the collision of two galaxies would ultimately lead to the merger of their central black holes, but it’s not. Think of the solar system — Earth has circled the Sun for some 4.5 billion years and will most likely continue in its orbit for another 5 billion years. Unless Earth somehow lost momentum, such as by a close encounter or collision with another massive object, there’s no reason for it to suddenly go careening into the Sun.

The same goes for black holes. Initially, it’s easy enough for two black holes to venture closer together via gravitational interactions between them and the gas, dust, and stars flying about during a galactic collision. And eventually, when the black holes are within spitting distance, they’ll emit gravitational waves that drive their inward spiral. It’s between the far-apart and close-together phases that there’s a problem, typically referred to as the "final parsec" problem.

When the black holes are just a few light-years apart, simulations show that the black holes will already have slingshotted away all the surrounding stars and other material, yet the gravitational waves they emit aren’t strong enough to change their orbits. Nevertheless, we know from LIGO’s gravitational-wave observations that black hole mergers do happen, even if LIGO’s measurements are of the stellar-mass rather than supermassive variety.

Coauthor Gregory Taylor (University of New Mexico) speculates that during a galactic pileup, material simply continues to fall into the center, enabling the binary black holes to come together.

“In my opinion,” Taylor says, “the pair will merge millions of years in the future.”

The reasoning is simple, he explains. Most large galaxies host a supermassive black hole and galactic collisions abound, yet 0402+379 is the only example we know of a tight pair of supermassive black holes — and not for want of looking. This makes sense if this in-between phase happens quickly, at least on cosmological timescales.

“If there were many stalled systems,” Taylor posits, “then why don’t we see them?”

Whether it's stalled or not, we’ll never see this particular pair merge into one, but it nevertheless presents a tantalizing observing target for understanding how black hole mergers work. The team plans to continue radio observations, as two additional observations are needed to pin down precise orbital parameters. But they'll also need patience. The astronomers must wait for the black holes to move sufficiently in their mutual orbit, so expect additional observations in 2019 at the earliest.

60-Second Astro News: A Carnivorous Quasar and a Galaxy Ghost 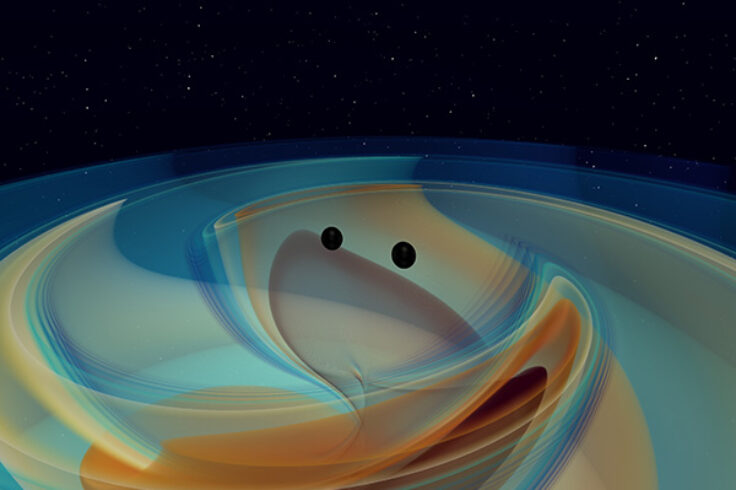