Saturn's two-faced moon hosts extraordinary avalanches that cascade much longer than they should. Figuring out what makes them flow might help scientists better understand landslides on Earth.

Saturn's third-largest moon Iapetus has two faces: one stark white and the other as dark as asphalt. This feature is only one of Iapetus's oddities. (Click the image for a larger version.)

Even among the fantastic variety that can be found in our Solar System, icy Iapetus is an odd duck. Saturn’s third-largest moon is half black, half white, a dichotomy that made it seem as though the moon vanished for half its orbit when discovered in 1671 by Giovanni Domenico Cassini. Iapetus also has an oddly squashed appearance, an equatorial bulging that could be explained if the moon revolved once every 16 hours — but Iapetus revolves once every 72 days. And on top of that, a mountainous ridge as high as 12 miles (more than twice the elevation of Mount Everest) circles much of the moon’s equator and makes it look like a giant walnut.

Now planetary scientists have another feature to add to the list of Iapetian oddities. While looking at high-resolution Cassini images, graduate student Kelsi Singer (Washington University in St. Louis) found evidence of 30 avalanches on Iapetus. Oddly, these chaotic cascades are much longer than they should be, a characteristic that may help scientists understand similar landslides on Earth.

As rock tumbles down a slope in an ordinary landslide, gravitational potential energy turns into ferocious motion that bulldozes just about anything in its way. Friction typically slows the rock to a stop before it can cover horizontal ground more than twice the height that it fell. But in sturzstroms (German for “falling stream”), a landslide becomes nearly unstoppable, flowing rather than sliding or tumbling, sometimes along nearly horizontal surfaces or even uphill. Sturzstroms can travel as much as 10 times their drop height. On Iapetus’s rugged terrain, that can result in landslides that surge as far as 80 km (50 miles). 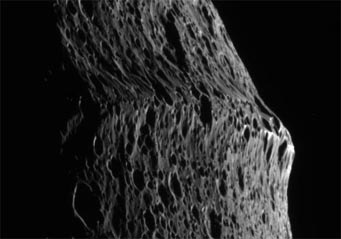 Of the 30 landslides found by Singer and her colleagues, 13 of them slid from the equatorial ridge that circles Iapetus. The mountains are as tall as 12 miles in places, more than twice the height of Mount Everest. (Click the image to see a larger view.)

An ice-moon might be an unlikely place to look when trying to understand sturzstroms on Earth. After all, we’re familiar with the slippery ice that has been the downfall of many a skater in the rink, so we would expect rocky landslides to be very different from icy avalanches on Iapetus. But Iapetus lives in a different part of the solar system, one on which it’s typically –280° Fahrenheit. At such low temperatures, ice is no more slippery than beach sand, which makes Iapetus a good laboratory for understanding sturzstroms on Earth.

Sturzstroms must stream along with reduced friction, but how? Geologists have at least nine different working theories — the leading one proposes that the avalanching material generates sound waves, changes in pressure that help the rock slip downward.

If sound waves are to blame, then geologists expect to see a trend — the bigger the avalanche, the more slippery the falling material. But on Iapetus, even the biggest avalanches are no more slippery than their smaller cousins.

“[The sound wave theory] is a fascinating possibility for landslides, and it is not ruled out completely by our data, but it is not required to explain our data either,” says Singer. 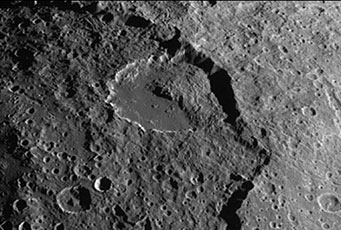 A piece of Malun Crater's rimwall broke off and fell 5 miles, yet it flowed outward for 22 miles before coming to a rest on the crater floor. Singer and her colleagues found 30 such extended cascades on Iapetus, 17 from crater walls and 13 from the equatorial ridge.

Instead, as detailed online in July 29th’s Nature Geoscience, Singer and her colleagues prefer a simple explanation called “flash heating.” As the falling surface rubs past the mountainside, the friction of the fall heats the ice enough to make it slippery — but not enough to melt it. The scientists suggest that even mildly heating the ice would transform the frigid, beach-sand ice into the slippery stuff we’re more familiar with. A similar flash heating mechanism might explain Earthbound sturzstroms, a claim supported by the discovery of melted rock found near landslide sites on Earth, imaginatively named “frictionite.”

Singer emphasizes that more observations are necessary. Iapetus’s low gravity might affect the results, so observations of avalanches on other icy bodies would help firm up the conclusions. Experiments in the lab could also test whether rapid motion makes super-cold ice more slippery.

“One of the exciting things about getting new data for the outer solar system is that we find interesting things we don’t expect,” says Singer. “We didn’t expect to find these fantastic landslides on Iapetus, but we were very excited that we did!”

Fascinating. I love how learning more about the cosmos enhances our understanding of our own planet Earth.

Equally nice comments, Anthony. This also shows how marvelously varied the Earth is as well. Monica, thanks for expanding our vocabularies with words like sturzstrom and frictionite, which could be absolute killers when playing scrabble. And, an observation about Iapetus, it must be the most unique world in the solar system, in a class all its own, a bi-frosted walnutoid. Truly the most confectionary (looking) of bodies, it makes me hanker for a sugar and chocolate covered walnut. But, getting back to science, Dr. Young, do the sturzstroms occur on the powered sugar or on the dark chocolate side?

Based upon other reports I read like ScienceDaily.com, I pass these observations on. Iapetus continues to reveal evidence of an active surface with these landslides and ice slides which are difficult to explain in physics. The other item is explaining the origin of the nearly 20 km high mountain ridge. Other report suggests evidence for Iapetus past 16 hour spin rate 4.5E+9 years ago when it formed according to the evolution model, the physical evidence on the surface is lacking to support such an hypothesis (i.e. rapid rotation to form the high mountain ridge). Iapetus does not have plate tectonics to answer the formation of such a high mountain ridge either. Indeed it may be less earth like than folks think.

The equatorial ridge is likely the remains of a satellite that once orbited Iapetus, and was shredded by tidal forces before falling to the surface. A former orbiting ring is simplest route to a ring around the surface.

Interesting itdea Peter. I've wondered about the possiblity of there being second or even higher order moons, that is a moon that has a natural satellite of its own, and so on. I would think this might even be likely in some systems with super-Jupiter planets, if the moons orbiting such aslo scale up in mass. To my knowledge, no such moon of a moon has yet been discovered. (Nor has any exo-moon been discovered yet, but one could be found soon I would think.) Perhaps higher order moons are absent due to inherent instability, which Iapetus' ridge could be evidence of if Peter is right.

it's interesting. the flash heating theory that suddenly makes the sliding material more slippery is exactly what happens underneath the blade of a skate as it passes across the ice. the ice instantly turns liquid so that the metal edge can slide easily across it.