Fossilized wrinkles in impact craters suggest once again that water might once have flowed on Mars — this time, beneath the surface. 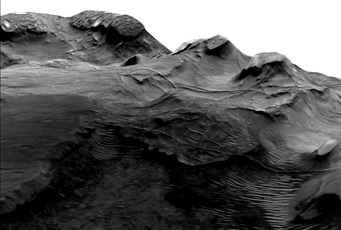 The Mars Reconnaissance Orbiter captured this 3D shot an impact crater in the Nilosyrtis area on the Martian surface, showing the long pipe-like ridges.

Water on Mars has been "discovered" many times in recent years. Clay deposits, meteorite evidence, dark rivulets flowing down Sunward-facing crater walls, and many more bits of evidence all point to a past, and possibly a present Mars with liquid water flowing on its surface.

Now it seems water might once have flowed beneath the surface too, putting Mars in the underground-water club with Europa and Enceladus. The evidence for an underground water system comes from ridges, well-known, but not well understood structures seen in Martian crater fields.

The ridges in this MRO image probably formed during impact events, say Saper and Mustard. Flowing, subsurface water later filled these ridges with minerals that stood strong against erosion.

Lee Saper and Jack Mustard (Brown University) mapped out 4,000 ridges, using the Mars Reconnaissance Orbiter to take wide-field shots as well as detailed close-ups of two crater fields called Nili Fossae and Nilosyrtis. They found that the ridges weakly aligned, suggesting that they were wrinkles caused by impact craters. But how have they stood the test of time, when the surrounding land has been eroded by wind and dust? Saper and Mustard suggest that when impacts fractured the ground, underground water flowed into the cracks, depositing minerals in their wake. Mars has no Drano to clear the pipes, so the minerals built up over time, fossilizing the evidence for water as the surrounding land eroded away.

Is this result shocking? No. Some might say that the evidence for a wet Martian past became clear in 1971 with Mariner 9 images of "flow features" on the surface. But what's interesting is that the two crater fields examined by Saper and Mustard fall right on the edge of Utopia — the Utopia Planitia, that is. The Utopia Planitia lies within the great Vastitas Borealis, the low-lying plains that cover much of Mars's northern hemisphere. One controversial theory suggests that Vastitas Borealis was filled by an ancient ocean some 4 billion years ago, and previous studies have suggested that some of that water may have gone underground.

BROWN UNIVERSITY RELEASE:
Ridges on Mars suggest ancient flowing water
Networks of narrow ridges found in impact craters on Mars appear to be the fossilized remnants of underground cracks through which water once flowed, according to a new analysis by researchers from Brown University. . . . Read the full press release.

I have read a number of past and current reports on water flowing on the surface of Mars. Something that I find frustrating, it seems I can never put my finger on well defined metrics here. For example, when did the water flow on Mars? 4 billion years ago, 3 billion years ago or even more recent? Another issue - how long did water flow on Mars surface? 1 day, 1 week, 1 month, just seconds? Perhaps someday I will see better defined metrics here.

I was hoping to return the favor you paid me more than a year ago when you had helped me with a question I had had about the supposed timing of the planetary collision that is thought to have resulted in the moon’s formation, but so far I haven’t had much success either Rod. It seems that as to timings for these water on Mars periods only the most general terms are used, with the proposed periods of wetness ranging across the entire span of times you mentioned. These extend from current claims where subsurface ices have been melted resulting in very short flows down the sides of crater walls all the way back to a proposed period of from 1 to 2 billion years early in the solar system’s history when most of the lower elevation northern hemisphere is said to have been submerged beneath a massive ocean. Not being able to come up with specifics either Rod, I guess all I can do is confirm the uncertainty that has frustrated you. However, given the uncertainties often present when trying to accurately date even our terrestrial rocks, is it really any wonder that the water on Mars story is still so sparsely understood?

I think water is now flowing on Mars.
There have been many images with seasonal variation indicating melting of ice and widening of rivers in the beginning of the hot season of Mars.
Why should Mars lose its water? And why hasn't it any flowing water?
It has two polar caps, and a clear atmosphere?