What Lies Beneath the Moon's Farside? 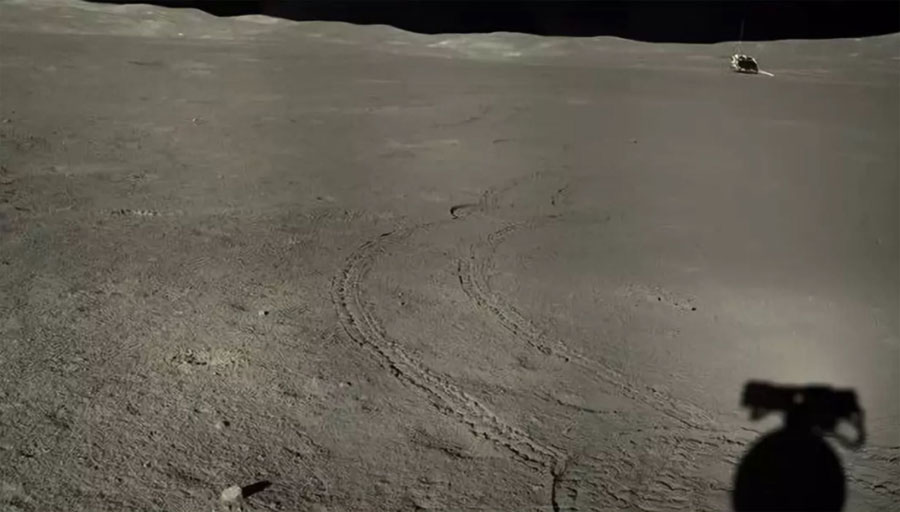 Yutu 2 looks back over its tracks leading back to the Chang’e 4 lander during lunar day 7.
CNSA / CLEP

The Chang’e 4 mission made the first-ever landing on the farside of the Moon last year — now it’s providing a look at what lies below its surface.

The Yutu 2 rover's Lunar Penetrating Radar has revealed three discrete layers of regolith below the surface of Von Kármán crater on the Moon’s farside.

Regolith is loose and broken-up rock, dust, and other material, much of which has been subjected to space-weathering such as from micrometeorite impacts. The Apollo and Luna missions studied regolith on the Moon’s nearside. Now, Chang’e 4 is investigating regolith on the farside, which has an older, crater-filled surface compared to the side we’re used to seeing in the evening.

The results, based on data from Yutu 2’s first two lunar days (59 Earth days) of roving, appear the open-access journal Science Advances. The image coming out of the data shows that down to 12 meters (39 feet), the regolith consists of fine, loose deposits with occasional larger rocks. The layer beneath the first sees an increase in large boulders, which appear down to a depth of 24 meters. The final unit consists of alternating layers of larger, coarse deposits and fine materials. These switching layers go down to a depth of at least 40 meters. The team speculate that these layers extend downward beyond that point, but the rover’s radar can’t penetrate any deeper. Ejecta from impacts throughout the Moon’s history played a part in creating this diversity of layers, along with other processes, including shearing, mixing, excavation, and subsurface structural disturbances.

“This is the first measurement of the Moon’s subsurface at high resolution that allows us to understand the stratigraphy and, in particular, the characteristics of an ejecta deposit,” says paper coauthor Elena Pettinelli (Roma Tre University, Italy).

The findings provide new insight into the thickness of the regolith, she adds. Regolith thickness can change from place to place and was hypothesized to go from a few centimeters to about 100 meters.

Pettinelli adds that understanding the regolith is important for oxygen extraction, either for use by future astronauts or as propellant.

“In principle,” he adds, “such layers may preserve ancient solar wind and galactic cosmic ray particles which could potentially provide information on the past evolution of the sun and the solar system's galactic environment.

“Accessing such buried regolith layers will be a task for future exploration,” he notes, “but locating them is clearly a first step.”

Yutu 2’s predecessor on the 2013 Chang’e 3 mission was also equipped with a Lunar Penetrating Radar. This instrument transmits radio waves, which penetrate the surface and reflect off of materials in subsurface layers. The detector then times the reflections, measuring the depths and reflectivity of the layers of materials below.

“This site is particularly transparent to radio waves; for this reason, we can see as deep as 40 meters,” says Pettinelli. “The nearside at the Chang'e 3 landing site was much less transparent”. Indeed, observations with Chang’e 3’s radar, used at Zi Wei crater in Mare Imbrium on the nearside, only down to 10 meters, suggesting different geological histories for the Chang’e 3 and Chang’e 4 landing sites.

“All these observations can help us understand the geology and origin of the different areas,” Pettinelli explains.

Yutu 2 covered around 120 meters in the first two lunar days, but had covered more than 367 meter at the start of February. The data returned will provide further insights according to Pettinelli.

“We would like to follow the stratigraphy along the rover path to see how it changes in space, if the layers get thicker or thinner or if the geology changes laterally. The best [result] will be detecting the base of the ejecta deposits and image the basalt below”.

Von Kármán crater is likely to have been flooded by mare basalts following ancient volcanic eruptions.

While the dual-frequency radar instrument operates at both 60 MHz and 500 MHz, the current study only deals with the higher-frequency data. Co-author Yan Su (Chinese Academy of Sciences) says new, deeper insights are forthcoming.

“The low-frequency, 60 MHz channel is aimed at detecting the deep structure to a depth of several hundred meters,” Su says. She is confident that the lower-frequency measurements will bear out the results from the higher-frequency ones. However, the low-frequency data remains somewhat controversial, due to possible disturbances in the signal that could be related to the rover’s metallic body.

Despite these challenges, the data are revealing, according to Clive Neal (University of Notre Dame), who was not involved in the study. “Understanding the regolith at depth is one of the major questions that will inform science, exploration, and commercial potential, as the regolith represents a treasure-trove of material to inform each of these different areas.”

Ground-penetrating radar will be an important tool for future investigations, he adds, and China’s developing important expertise in this area. That informs not just our understanding of the evolution of the Moon’s surface but also resource potential.

Yutu 2 has been patrolling its home crater ever since its mesmerizing landing and subsequent deployment in early January 2019. The Chang’e 4 landing site, called Statio Tianhe lies in the relatively flat eastern region of Von Kármán Crater. The crater in turn is situated in the northwestern sector of the South Pole-Aitken Basin, the oldest and largest impact structure on the Moon.

During its first year of operations Yutu 2 has set longevity records, returned amazing images, and analyzed lunar materials with its spectrometer. The rover and lander woke up for their 15th lunar day on February 17th with all instruments in good condition.

There is more to come from ground-penetrating radar, both in this mission and beyond. NASA’s 2020 Mars rover will carry a radar instrument, as will China’s own Mars vehicle, confirms Su. Such a payload would also have great value in future Moon missions, especially in detecting water ice at the lunar south pole.