How to Make a Star Wheel the Simple Way 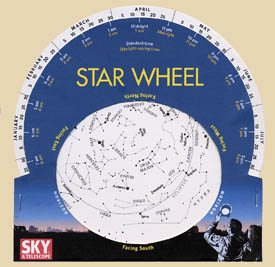 It takes just a few minutes to make this handy Star Wheel, which helps you navigate the night sky with ease! Click on image for a larger view.

Like most people, you probably enjoy getting out under a clear night sky to gaze up at the beautiful tapestry of stars and planets overhead. But what if you can't tell Polaris from Pollux, or Saturn from Sagittarius? No problem! Using this simple, easy-to-make Star Wheel, you'll be navigating the night sky with confidence in no time.

So what stars will be in your sky tonight? To find out, follow these simple directions to make a star wheel you can use tonight!

First, you'll need to display (left mouse click) or download (right mouse click) the two parts for your Star Wheel (also known as a planisphere). Make sure your computer can display PDF files; if it can't, download and install the free Adobe Reader.

Part 1, which is the circular sky map.

Part 2, which is the star wheel's outer sleeve.

Each part for the Star Wheel is sized to fit on a single sheet of letter-size paper. Print out both sheets and cut out the parts. For the sky map (Part 1), trim away the gray corners so that you're left with a circle 8 inches across. For the outer sleeve (Part 2), make sure you keep the large white rectangle at the bottom; also, cut out the white oval in the middle.

To make a Star Wheel, fold the white rectangle at the bottom of the outer sleeve so it's underneath the front. Then staple the rectangle to the front at the locations marked by short white lines to either side of the oval. Now slip in the circular sky map so it shows through the oval. That's it! 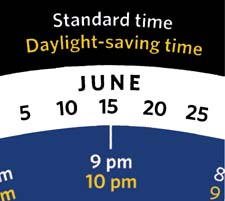 To use the Star Wheel, align the desired date with the desired time. This example is set for 10 p.m. (daylight-saving time) on June 15th.

Pick the date and hour you want to observe, and set the Star Wheel so this date (on the rim of the circular disk) matches the time indicated along the edge of the outer sleeve. Use white hours when standard time is in effect and orange hours when clocks are set for daylight-saving (summer) time.

The Star Wheel's large oval shows the whole sky, and the oval's curved edge represents the horizon you're facing. Once outside, hold the Star Wheel out in front of you and look at the yellow "Facing" labels around the oval. Turn the entire wheel so that the yellow label for the direction you're facing is on the bottom, with the lettering right-side up. If you're unsure of your directions, just remember where the Sun sets; that's west. 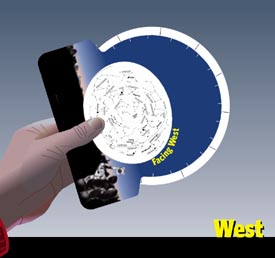 Once you've set the date and time, turn the Star Wheel so the 'Facing' label at the bottom of the oval matches the direction in the sky you're looking.

Now the stars above the map's horizon should match the real stars in front of you. Remember that star patterns will look much larger in the sky than they do on the map. The farther up from the edge of the oval the stars appear, the higher up they'll be shining in your sky. Stars in the center of the oval will appear directly overhead.

If you'd like a more visual guide, watch our video on how to use a star wheel.

This Star Wheel is usable for northern latitudes between 30° and 50°, which covers virtually all of the continental U.S., southern Canada, and Europe. It includes the names of the brightest stars and the most prominent constellations. Depending on how dark the sky is in your area, there may be more stars overhead than are shown on the map. Everyone's sky looks a little different. If there are fewer stars visible to you than appear on the Star Wheel, try to find an observing site that is not flooded by house or streetlight. Also, the longer you're outside, the better the chance that your eyes will adapt to the darkness and the more stars you'll be able to see. 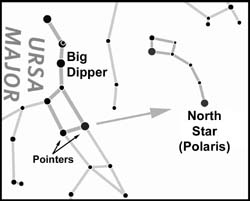 By drawing a line through the 'pointer' stars at the end of the Big Dipper's bowl, you can easily find the North Star.

Stars in the northern sky do not rise or set — instead, throughout the night they seem to slowly turn counterclockwise around Polaris, the North Star, which seems to stay in the same place in the sky no matter what time of night or season of the year. So let's find the North Star!

Begin by locating the Big Dipper. This giant spoon is actually part of a larger constellation called Ursa Major, the Great Bear. Find the two end stars in the Dipper's bowl — look opposite the handle. They're known as the "pointers." Why? Because a line drawn between them and extended away from the bottom of the bowl leads you to Polaris, the North Star. Now that you know how find Polaris, you also know how to find due north no matter where you are in the Northern Hemisphere! 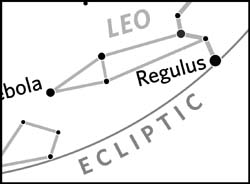 Planets aren't plotted on the Star Wheel, but they travel across the sky along an imaginary line called the ecliptic.

The Moon and planets aren't shown on the map because their day-to-day movements are more involved than the motions of the stars. However, the curved line coursing across the map is called the ecliptic. It represents the path in the sky that brightest planets follow. If you see a bright "star" shining with a steady glow on or near this curved line, and the object isn't plotted on the Star Wheel, you're looking at a planet. The Moon likewise travels very near the ecliptic in its orbit around Earth.

You can also use our interactive sky chart to see what's in the sky for your time and place.

No matter how well you know the sky, you'll find that a star wheel comes in handy for a quick check of "what's up" on any given night. If you'd like a better version of the star wheel you see here, you can find several star wheels in our online store.

Note that if you see a bright stationary object in the heavens that's not on your star wheel, it's probably a planet! Confirm this by looking at the line in the star wheel's viewing oval that says "ecliptic" -- is the bright object somewhere near where that line would be on your sky? If so: planet! The moon will also travel within about +/-5 degrees of the ecliptic through each month.

To make the star wheel a little more durable, try printing it out on cardstock or heavyweight paper (as long as it's an appropriate weight for your printer to handle). You can even cover the two separate pieces with clear contact paper to protect the ink from moisture for those grassy-meadow viewing situations. Use a dim red led flashlight to avoid destroying your night vision when identifying constellations or stars (really; white light will contract your pupils and you'll lose about a magnitude of faint-end vision for 15 minutes or so). If it's warm weather, don't forget the mosquito repellent!

Just thinking about the night eyes with the red light, would a red ink star chart work better than this grey/white one?

What about if I live below 10 degrees north? how to represent polaris low in the horizon and also a lot of southern skies’ stars?