The Hows & Whys of Solar Eclipses

Take a few minutes and become an eclipse expert for family and friends.

Sure, you know the basic idea: A solar eclipse happens when the Moon passes between you and the Sun, hiding part or all of the Sun from view. It’s weird, it’s unearthly, and it scared the bejeezus out of our ancestors who didn’t know what was going on. The stories they made up to explain eclipses were hair-raising. The drive to actually understand eclipses — well enough to predict them! — was one of the drivers of ancient astronomy, and thus one of the drivers for the whole idea of science itself.

One breakthrough was grasping the scene from another viewpoint: The Moon is a sunlit ball and casts a shadow, and we see an eclipse of the Sun when the Moon’s shadow sweeps over us, like in the diagram above.

First off: The Moon orbits around Earth about once a month. This repeating journey brings the Moon close to our line of sight to the Sun at the time of  “new Moon.” At that time the sunlit side of the Moon faces directly away from us; the Moon shows us only its darkened night side. And we can’t see even that — because when the Moon is near our line of sight to the Sun, it’s hidden in the Sun’s dazzling glare in the bright blue daytime sky.

If the Moon crosses the Sun off center as seen from your location, you get only a partial solar eclipse, with the Moon’s silhouette making what looks like a dent in the Sun’s brilliant face. A deep partial eclipse, where the dent is big, turns the Sun into a dazzling crescent.

But the really good stuff happens if the Moon crosses the Sun nearly dead center as seen from your location. Then you may get a total solar eclipse, blacking out the Sun completely for anything from a few seconds up to 7½ minutes.

A total eclipse also has partial-eclipse phases before and afterward. The partial phases take their time; the whole event usually runs about 3 hours from beginning to end.

A total eclipse is much more spectacular than a partial — not only because the sky and land get much darker, but especially because during totality we get a rare look at the Sun’s intricate, feathery corona: its outermost atmosphere, made mostly of free electrons and protons that are trapped in the Sun’s loopy, streaky magnetic field.

The partial phase of a solar eclipse can be seen from a large swath of the world. On April 8, 2024, that includes all of Central and North America.

But totality is reserved for a much smaller area. The dark center of the Moon’s shadow, the part where the Sun is completely blocked (the shadow’s umbra) is never more than about 160 miles wide by the time it reaches Earth, usually less. On April 8, 2024, the narrow shadow-patch of totality will sweep from central Mexico, across Texas, up through New England, and into the Canadian Maritimes. That’s the part for which so many people are preparing to travel.

Your Eyes Are Worth Keeping

As you’ve probably heard many times, staring at the Sun’s dazzling surface, even when only part of it is in view, can damage your eyes and leave a permanent blind spot in your vision. Never stare at the bright Sun, whether a partial eclipse is in progress or not.

Instead, during the partial phases you need to look through a safe solar filter. One example is the kind that’s made to go over the front of a telescope. For viewing just by eye, all of the inexpensive little “eclipse glasses” that we have tested do just fine.

Or you can watch an image of the Sun as projected onto a piece of paper — using either a pinhole, which gives a very small, dim, crude image, or a pair of binoculars or a telescope, which project a much bigger, brighter, and sharper image onto paper.

While the Sun is hidden during totality, no filter is needed!

The Workings in 3D

So why don’t we get a solar eclipse at every new Moon, you might ask? How does the Moon usually sneak by unseen?

The answer is that the solar system is not perfectly flat. In particular, the orbits of the Moon and Earth do not lie in quite the same plane. If you drew Earth’s orbit around the Sun on a flat sheet of paper, the Moon’s orbit around Earth would be tilted 5° out of the paper, floating a little above and below it except where the planes intersect. Eclipses happen only when both the Sun and Moon are close to this intersection, along what’s called the line of nodes.

A 5° tilt might not seem like much. But it’s 10 times the ½° width of the Sun as we see it in the sky. So, when new Moon happens somewhere other than at the line of nodes, the Moon has plenty of room to pass north or south of the Sun without crossing it. That’s why solar eclipses are uncommon.

Eclipses of the Moon

What about lunar eclipses? I haven’t mentioned them yet. These happen whenever the Earth-Moon geometry is reversed: when the Moon passes through Earth’s shadow. This is such a different kind of event that solar and lunar eclipses hardly both deserve to have the same name “eclipse”!

Why not? With a lunar eclipse, instead of something hiding something else as seen by you, you’re just seeing the Moon get shaded. And, the Moon never goes completely dark. Think of covering the Sun in the sky with your hand, versus looking at your hand’s shadow on the ground. Two different things.

During a lunar eclipse, people on the entire side of the world facing the Moon all see the same thing happening to the Moon at once, just like friends around you can all see the shadow of your hand on the ground. But when you cover the Sun with your hand, the Sun disappears only for you, not for the people off to the side. That’s part of what makes a total solar eclipse rare and special.

Question :: Why does the shadow sweep from northwest to southeast? I'm having a hard time trying to visualize this.
Thanks for any help .....

It's a combination of the Moon's moving shadow AND the rotation of the Earth underneath the shadow. Earth's rotation is tilted quite a bit with respect to the Moon's orbit.

This is a very nice article. What is also interesting is that whenever a solar eclipse occurs, a corresponding lunar eclipse happens about two weeks before or after during full moon. It's not necessarily a total lunar eclipse; it may be a partial or partial penumbral. 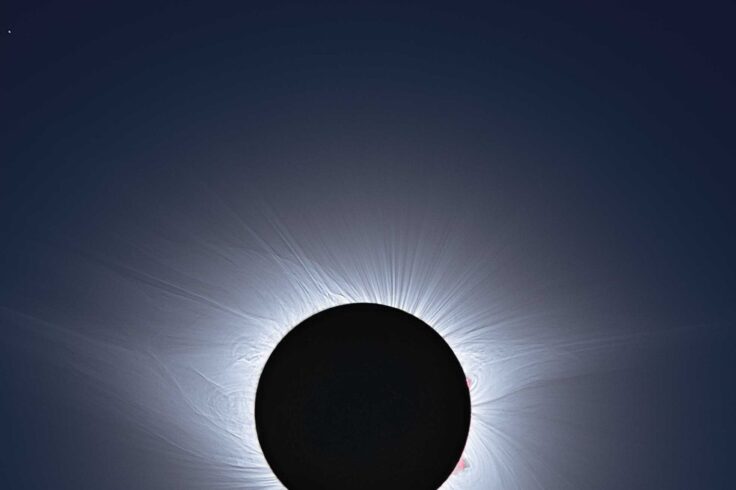