Boston, the easternmost metropolis in the United States, was well placed for viewing last Saturday’s total lunar eclipse. But after watching weather forecasts all the preceding week, I somehow got it stuck in my head that we were going to be clouded out for the big event. It dawned cloudless that morning, but my gloomy forecast seemed to be confirmed as clouds thickened throughout the afternoon. So I was completely unprepared, both physically and mentally, for an excursion to view the eclipse.

But about twenty minutes before sunset, I realized that there was a thick band of blue to the east, where the fully eclipsed Moon would rise. So I dressed up, grabbed binoculars and telescope, and dashed off to the top of the hill in Danehy Park, the spot with the best eastern horizon for miles around.

There I encountered my second surprise. I was subconsciously expecting to be alone, or maybe with a few people, as I usually am when stargazing from the top of the hill. But in fact, twenty or thirty people were gathered up there, inspired partly by the press reports that Sky & Telescope had given to the local media. The fact that it was the warmest day in the past month certainly didn’t hurt, either. It was a jolly crowd of young and old: families, couples, and groups of friends. 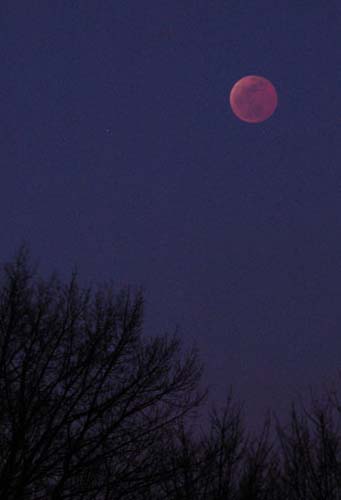 In Dedham, MA, 10 miles to my southeast, Kurt Sidor caught a similar view of the eclipse through the clouds. See our Photo Gallery for this and other photographs of the event.

The sky did not look promising; the overcast was solid everywhere except toward the east, and even in that direction there were many bands of clouds. But this time my pessimism proved to be an asset rather than a liability. Being perhaps the only person there who was psychologically prepared for a really difficult sighting, I was able to spot the Moon when it was a few degrees above the horizon, just a faint ruddy accent to the haze. About half the people there couldn’t see it at all. That’s when I was really glad that I had brought my telescope, because even at a low 16X, the circular disk of the Moon was obvious to everyone.

Shortly after, the Moon disappeared into the first cloud band, and the families with young children left. Ten minutes later, it popped out again briefly, a bit easier to see this time. And so it continued for the next hour, with the Moon making brief appearances, sometimes half covered in cloud, but a little more prominent each time as it climbed higher and the evening got darker.

The experience might have been a little frustrating if I had been alone; I’ve seen much more impressive eclipses. But sharing it with a crowd of like-minded strangers made it wonderful, magical. The Moon disappeared and reappeared so often that everyone got to make his or her own “first sighting.” Periodically, a few more people would leave, cold but fully satisfied with our shared adventure. Finally, about 20 minutes before the end of totality, the Moon hit a genuinely clear spot and shone briefly in its full yellow-and-red glory. Then it disappeared into the thick overhead cloud bank, and I went home for supper.