Summer is usually a pretty poor time for deep-sky observing in the US Northeast. The nights start far too late — at least in June and July. Then there are the mosquitoes. And worst of all, we're usually plagued by week after week of haze.

But there are exceptions, and last night was one of them. In fact, it looks as though it's likely to be the only transparent, Moonless night of this lunation. So despite the fact that it was a Thursday and I had a lot of stuff to do, I really had no choice but to go out observing. It's all very well for people in California, who get night after night of cloudless weather. But here in the East, if you don't seize every opportunity, no matter how inconvenient, you're likely not to observe at all.

I went out to my club's observing field in the Boston exurbs. It's really my best choice for a slightly dark site when I'm at my home in Cambridge. The drive is only moderately onerous — roughly 45 minutes each way. That's a mighty long way to go for skies that are sickly gray even directly overhead, but there is no better alternative.

It's sobering to realize that many stargazers have never seen a sky darker than this. I have some issues with the Bortle Dark-Sky Scale, but in this particular case the rating is an unambiguous Class 5. A good night is typically around magnitude 20.0 per square arcsecond on the Sky Quality Meter, though it was a smidge better than that by the time I left after midnight. The summer Milky Way is visible nearly horizon to horizon, but it's just a ghost of its true self.

Still, it's surprising how much you can see even in mediocre conditions. I was surveying Messier objects in my 70-mm refractor and my 10×30 image-stabilized binoculars, and I found most of them effortlessly, even in such relatively modest instruments. But M101 proved harder than I expected. Remembering how this galaxy hits me over the head at my country home — where the skies are still very far from pristine! — I was expecting to sweep it right up in my 70-mm refractor. But I actually had to look around for a while before I spotted it with averted vision. If anything, it was actually easier to see with my 10×30 binoculars — proof again that binocular vision can trump aperture for viewing objects that are large and have low surface brightness. 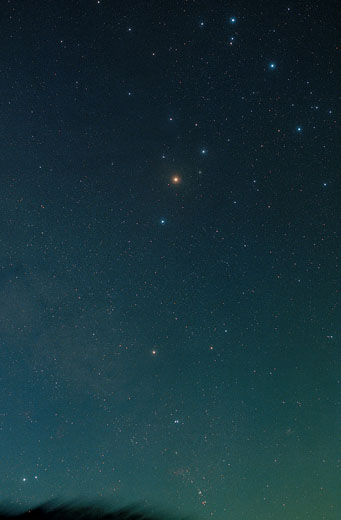 This is what Scorpius would have looked like last night if the sky had been truly dark. NGC 6321, the Table of Scorpius, is the fuzzy area just above and right of the grass.

Scorpius proved to be a pleasant surprise. I hadn't realized just how low the southern horizon is at that site. Sweeping the treetops with binoculars, I was startled to see NGC 6321, the Table of Scorpius. This is one of my very favorite clusters, but I usually think of it as too low to see from Massachusetts. I caught it a little after culmination, so it was barely 4° above the theoretical horizon. But despite the 10 or 15 airmasses obstructing the view, this cluster was beautifully resolved and glittering like crazy at 16× in my 70-mm refractor. I was also surprised to see not only M7 naked-eye (I expect that!) but also M6, which is a lot subtler. Not bad for 15° above the horizon in the Boston suburbs!

The best surprise of all was Comet LINEAR (C/2006 VZ13). I'd written our Web story on this comet, so I felt obliged to look for it. Having read numerous accounts of people trying and failing from cities and even suburbs, I wasn't sure I'd succeed. Imagine my surprise when I stumbled almost immediately on a very large, bright, and completely unmistakable cloud of light. In fact, it was readily visible not only in my scope but even in my 30-mm binoculars. It was strikingly similar to M10, which I had just viewed, in size, brightness, and concentration. But M10 was fairly low in the sky by then, which no doubt made it seem fainter than it should have been.

All in all, not a bad night at all. But now I'm working on just 4 hours of sleep. I'll have to do some serious sleeping this weekend!

Supernova in M82 Passes Its Peak